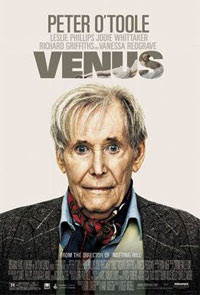 When I was a collegiate thespian I scored the lead in the College of Southern Idaho's production of The Lion In Winter and mimicked Peter O'Toole's every intonation and gesture. Sure enough, I got rave reviews. Or really, I should say, O'Toole continued to receive his.

Last September at the Toronto International the possibility arose of interviewing O'Toole for Venus. At the last moment, unfortunately, he had to withdraw from appearing due to frail health. I was crestfallen, knowing that would most likely be the last chance I would ever have to meet O'Toole face to face and to acknowledge the influence he had upon me as a young actor.

Fortunately Gary Meyer had that opportunity at the 2002 Telluride Film Festival where—in his capacity as part of the programming team—he helped host a retrospective of O'Toole's work in honor of the actor's 70th birthday. In conjunction with the Balboa's screening of Venus this week, Gary reminisces on interacting with O'Toole at Telluride at his Balboa Theatre website and it's well worth the read, along with his synopsis of Venus and his rich hyperlinks.
Posted by Michael Guillen at 2/17/2007 08:51:00 AM

Thanks for stopping by my blog and saying hello Michael! I'd be happy to exchange links with you.

I enjoyed this post about Peter O'Toole a lot since he's one of my favorite actors. I hope to catch the restored print of Becket playing locally before it leaves town. Becket is one of my favorite O'Toole films and so is The Lion In Winter. They would make a nice double feature!