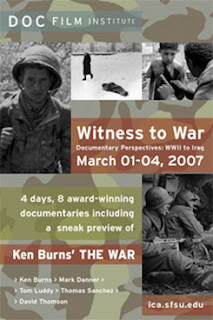 On March 1-4, 2007, The International Center for the Arts / Doc Film Institute of San Francisco State University is presenting a four-day event—"Witness to War—Documentary Perspectives: WWII to Iraq" that will feature two consecutive evenings of onstage appearances by acclaimed documentarian Ken Burns. Burns will be previewing two different programs from his epic work-in-progress, The War, to be aired this Fall on PBS. The Castro program will be a 90-minute compilation from the seven-part series, followed by an onstage conversation with Thomas Sanchez. The following evening the first installment of The War will be shown in its entirety, moderated by Burns at the Premiere Theater in the Letterman Digital Arts Center, in the Presidio. I've never been in that theater? Has anyone else?

The next two days of screenings will be at the Koret Auditorium in the M.H. deYoung Museum and will include a tribute to filmmaker Humphrey Jennings introduced by David Thomson, Sergei Loznitsa's Blockade (2005) introduced by Tom Luddy, and the North American premiere of Bertrand Tavernier's four-hour documentary An Undeclared War (1992). Amazing, in a way, that it has taken 15 years for this film to reach Stateside and it has just recently been announced that Tavernier will be in attendance. Mark Danner, whose pessimistic eloquence recently impressed me at the World Affairs Council Ghosts of Abu Ghraib screening will introduce Tavernier's documentary and, hopefully, engage the director in conversation. Danner will likewise be introducing a screening of James Longley's Oscar-nominated Iraq In Fragments (2005).

"Witness to War" promises to be a thought-provoking series on one of the most entrenched archetypes of the human psyche.

The Humphrey Jennings films are wonderful and I hope to be able to see them on the big screen. I'm afraid I'll have to miss the Tavernier, though.

I've been to the Premiere Theater, once, for a screening of Lady in the Water.

How was it? I'm curious to take a looksee.

WonderCon beckons during the Humphrey Jennings films, which I would have loved to have seen on a big screen, not the least of which for David Thomson's introduction. Ah well. If I had a true superpower I would want it to be the ability to clone myself.

The awaited launch of Burt Young’s official website is now available on internet for his fans. He can be browsed at: http://burtyoungartandfilm.com/