ANIMATION AT THE PFA

The March/April Pacific Film Archives calendar just went on-line. As ever, their offerings are tremendous, not the least being three days with Apichatpong Weerasethakul, a 19-film Antonioni tribute, and a retrospective tribute to the 50th anniversary of the San Francisco International Film Festival.

Two animated programs likewise caught my eye, tucked away into more comprehensive programs. The first is part of the Alternative Visions program, When A Stranger Comes To Town: Recent Animations, screening Tuesday, March 13, 2007, with the animators in attendance to discuss their work. I recently caught Suzan Pitt's weirdly brilliant El Doctor at this year's SF IndieFEST and look forward to hearing what she has to say about the piece. 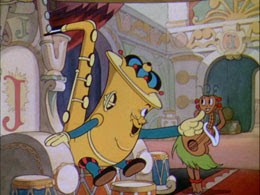