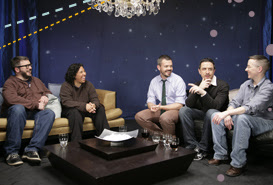 I don't subscribe to Logo (I barely have time to watch t.v. as it is!); but, if I did (and if somebody out there does and wants to tape it for me), Jenni Olson will be participating in a group discussion of The Queer Year In Film along with Alonso Duralde, Angela Robinson, John Polly and Craig Chester come Oscar weekend, Saturday February 24 and Sunday February 25. Apparently the fab five sat around "rabidly chit-chatting" about the designated topic "on a cheesy talk show set for four grueling (but fun) hours." Jenni assures, however, that the footage has been trimmed down to less than a half-hour of absolute highlights and they will be playing little clips all weekend.

Not only that but Jenni's Joy of Life, the subject of our interview some time back, is being screened for free at SFCamerawork this week along with Jem Cohen's Chain and Natalie Zimmerman's Islands, as part of SFCamerawork's exhibition: traces of life on the thin film of longing. The free screenings are Tuesday, February 20, 2007 through Saturday, February 24, 2007 from 12:00 PM to 5:00 PM at SF Camerawork, 657 Mission Street, 2nd Floor, San Francisco, California.

If that doesn't satisfy you, then go check out Jenni's blogsite, Butch, where she lists her dozen websites! And I thought I was treading water….
Posted by Michael Guillen at 2/19/2007 12:04:00 AM