Updating his Noir City audience on the prospective campaign for the future Mr. & Miss Noir City, Muller imagined that the grand prize would be an all-expenses-paid trip to some skid row motel, along with a .45 and a box of shells.

Muller reminded that Noir City is presented by the non-profit Film Noir Foundation, created to rescue and restore America's noir heritage. "I don't have to go into too much detail," he added, "because, unfortunately, tonight is a prime example of why the Film Noir Foundation is necessary. We had booked the film Cry Danger (1951) from a reputable film archive—which shall remain nameless even though it is based in Cambridge, Massachusetts at a very esteemed university—and they wrote us that they had a very good 35mm print of this film. Lo and behold, when that film was pulled to be shipped to San Francisco, it was determined that it had deteriorated beyond the point that it could be projected. This is not an ad, ladies and gentlemen, this is the real world. Fortunately, the UCLA Film and Television Archives bailed us out and they shipped us a 16mm print of Cry Danger, which you will see this evening. As of today there really is no 35mm print of Cry Danger that you can see, that can be projected in a theater anywhere, which is a crime; it's a terrific film. This is what the Film Noir Foundation is all about. Those elements are somewhere, somebody owns them, we will come to them, and we will get a 35mm print made of Cry Danger. It's the only way we'll save it. People say all the time, 'When's that coming on DVD?' Well, I can now tell you that the answer is, 'Never.' Unless something is done to find the film and restore it to a condition where a master can be made and it can be put on DVD. So, again, righteous thanks to UCLA for bailing us out at the last minute so we had a film with Dick Erdman in it that we could show."

"The other fabulous thing that happens with the Noir City Film Festival," Muller continued, "is [that] we are kind of a lightning rod for all of this wonderful stuff that bridges generations. I'm sure some of you have been in San Francisco long enough to remember David Tibbons, the book editor of the San Francisco Chronicle—I'll tell him that nobody applauded—David's now out in Washington working on the National Literacy Project, which is far more valuable than reviewing books at the Chronicle. We keep in touch and I was really amazed when earlier this week he said to me, 'I looked at your website and I saw your programming and I know Andy Bowers, Bill Bowers's son', because tonight is—in fact—a tribute to screenwriter William Bowers. David was nice enough to put me in touch with Andy Bowers who is a successful radio journalist. You've heard him on NPR. Little did I know that this was William Bowers's son. So I am very pleased as we celebrate the work of William Bowers—and those of you who were at the festival last year where we had a double bill of Larceny and Split Second—that was only the first of our Bill Bowers tributes. This guy is so good, we bring him back the following year!" Muller then introduced nearly an entire row of Bowers family members—"the Bowers brigade"—who flew in specifically for Noir City's tribute.

Muller continued that he was equally thrilled that the audience was going to get to see one of "the great noir second banana performances" in Cry Danger. "I've always said that Richard Erdman delivering Bill Bowers's dialogue is like a match made in heaven. These two guys were meant to be together on a big screen." He invited us to stick around for an on-stage conversation with Erdman who he described as "a wonderful raconteur, as sharp today as he ever was."

Watching the murky 16mm print of Cry Danger underscored that this is, indeed, something of a lost classic. The poor quality of the print was redeemed by the script's sparkling and snappy dialogue—a true tribute to the screenwriting genius of William Bowers—and one can only hope that somehow, someday, this film will be restored back to its full 35mm glory. 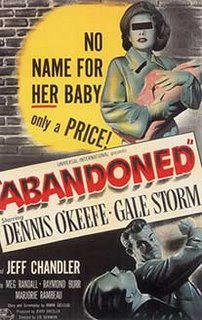 The program's second feature—Abandoned (1949)—was practically unearthed from the depths of the Universal vaults with a crowbar. "You will not see William Bowers's name on the credits for this film," Eddie informed us, "but I did show a lousy 16mm print of this film several years ago in L.A. when we had the privilege of Joseph Newman, the director, coming out to talk about it and he had only one thing to say about the film. He said, 'Everything good about this movie was the responsibility of William Bowers. He did the rewrite on the screenplay. Bill Bowers came in and gave us something to work with.' " Fortunately for his Noir City audience, Muller got his hands on a crisp 35mm archival print courtesy of Universal Pictures.

I just did it! How'd you know?

New Blogger republishes RSS feeds for the last 25 posts when you make the migration, so you popped up on my RSS reader. Glad all is well and stable here at the site, Michael. Have a nice weekend.