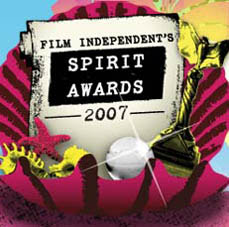 Having just watched the live broadcast of this year's Independent Spirit Awards, I wanted to offer a few comments. First, to close off this year's program host Sarah Silverman joked that Felicity Huffman would be hosting next year and whether it's Felicity, or whoever else, I hope Sarah Silverman lets go of the stranglehold she has on this program. Vulgar, insulting and monumentally unfunny, I say enough already. Don Rickles has already played this schtick. Who the fuck cares what kind of cheese she wants to fuck? It felt like a moment of joy to consider that she won't be back next year.

From the moment I watched Ryan Gosling's riveting performance in Half Nelson, I knew he would be nominated for both an Independent Spirit and an Academy Award. The moment Forest Whittaker's performance in The Last King of Scotland entered the arena, I knew that the most graceful tradeoff conceivable would be for Gosling to win the Independent Spirit and Whittaker to win the Oscar. So Gosling's won his and now we'll see what happens tomorrow (as if we don't know). Even Gosling himself seemed to accept the limitations of these processes with good-natured sportsmanship. He joked that Forest Whittaker had phoned him last night to ask if he wouldn't mind winning at the Independent Spirits since he was so tired of winning everywhere else. Gosling thanked his producers for greasing the necessary palms to secure him his nomination. This was the one recognition I really wanted to have happen at the Independent Spirits and so I am happy and content with the ceremonies. That Shareeka Epps also won Best Actress for her smoldering understated performance in Half Nelson underscores just how essential teamwork is at pulling out the best in everyone.

Little Miss Sunshine's win as Best Feature might again be an elegant tradeoff with the Oscars. It seems a more appropriate win here within the independent filmmaking milieu whereas if it wins at the Oscars it will feel more of a dark horse upset. That might be said of its Best Directing award as well. Though Alan Arkin has certainly paid his dues and deserves whatever accolades come his way, I would have really much rather seen Channing Tatum deliver an acceptance speech, but that's just a preference of erotics over aesthetics. Notwithstanding, Tatum looked gorgeous whenever the camera glanced his way. Yow. Silverman's barb that Arkins' acceptance speech was well-done held some truth, though you couldn't help going, "Awwww" when Arkin said that he felt as small and humble now winning this award as he did at the beginning of his career. Michael Arndt, hiding beneath the brim of his military cap—the same one he wore to his Codys Bookstore appearance, I think—expressed his gratitude that Film Independent had created such a specific category as First Screenplay because it respects the writer in his early stages and encourages him forward. Having just spoken with him, his win felt good.

The musical spoofs that accompany each nominee in the Best Feature category were, likewise, the best for LMS and Half Nelson. Taylor Dayne belted out, "Messed up family / that's what mine has turned out to be…." and Rosario Dawson crooned that the only one who could ever reach her was the "crack smoking, hard toking teacher man." Though an honorable mention must go to Neil Patrick Harris who has long shed his Doogie Howser scrubs to reveal one of the best voices treading the boards.

I was thrilled that Quinceañera won the John Cassavetes Award. Wash Westmoreland expressed that it would be a note for the diary to be handed the John Cassavetes award by Angelica Huston and was keen to point out how blessed they were to be nominated in this category where they had a chance of winning against Little Miss Sunshine. Richard Glatzer paid due acknowledgment to Emily Rios, Jesse Garcia and the heart of the film, Chalo González.

Although he didn't win, Guillermo del Toro's turn before the camera introducing Pan's Labyrinth amused me to no end. He was given a knapsack and asked to crack a joke about what was inside but all he found were three large suppositories. Pan's Labyrinth did win an Independent Spirit for del Toro's compadre cinematographer, Guillermo Navarro.

The Lives of Others continues to draw praise and awards like a magnet and I continue to be pleased about that. Florian Henckel von Donnersmarck won the Independent Spirit for Best Foreign Film and this helps ease my conflicted feelings about who should win the Oscar in this category.

Finally, the two other joys of the broadcast for me were the Special Distinction award granted both Laura Dern and David Lynch for their work together over the last 20 years, most recently on Inland Empire. With his cow on a leash, David Lynch lobbied for Dern's nomination for Best Actress. He didn't succeed. But at least the film community has taken notice with this special award.

Hi Michael, regarding your SF360.org post: The list was awesome. I've never really been able to describe "the House Next Door". It's amazing how much it feels like a online version of a cultural magazine, rather than a run of the mill google blog. I'll check out "Film of the Year" as well.