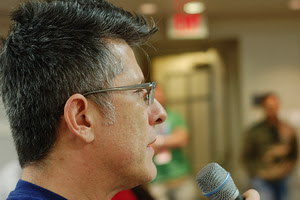 Today marks the one-year anniversary of the launch of The Evening Class with my first post reporting from the 4th San Francisco Korean American Film Festival. What a long, strange trip it's been. Intended originally to help me manage my boredom and depression while recuperating from a series of hospitalizations, The Evening Class has become so much more for me and promises to evolve even further.

I want to thank each and every link on my blogroll for creating the unique sociality that characterizes film writing on line. Being mentioned and referenced elsewhere has bolstered confidence and granted credence. I also want to thank every publicist I have worked with this year—primarily Karen Larsen and her crew at Larsen Associates—for giving a nobody his first press pass and starting a chain of events that has been nothing but exciting and wonderful. I'm also grateful to Shelley Spicer, John Weaver and Dierdre Kennedy at Terry Hines & Associates for providing so many opportunities to participate in Bay Area press junkets. Gary Meyer at the Balboa Theatre, Joel Shepard at the Center for the Arts, Shelley Diekman at the Pacific Film Archives, and the many programmers of the Bay Area's numerous film festivals are likewise to blame for the movie monster I've become. Of special note is Hilary Hart and her staff at the San Francisco Film Society who really gave me a chance to test my chops at last year's International Film Festival and with whom I am looking forward to working with for this year's landmark 50th.

Writing means nothing if it isn't read and I am so grateful for the various venues that have allowed me to self-publish my work. Todd Brown at Twitch has armed me with powerful cachet, frequently writing me letters of assignment to festivals outside of the Bay Area. Attending the Toronto International was a revelation. Cecilia Tsai at Entertainment Today has provided a Los Angeles exposure and necessary lessons in compression and focus. Jonathan Marlow and David Hudson at Greencine have provided just enough financial compensation to inspire me to consider that I can supplement a meager disability income after all.

Most recently I have been gifted by editor Susan Gerhard with being asked to be part of the SF360 team and look forward to working with them in the near future.

I had no idea when I started out a year ago that I would enjoy interviewing talent as much as I do. Over 60 interviews in one year! I almost wonder who the heck is doing this? Is it really me? Do I really get to sit down and talk to this broad variety of creative and intelligent, impassioned talent just because I have a question or two? It still boggles my mind. I want so much to contribute to the online world of film reportage and am grateful I have found a niche that works for me, and seems to be of service to others.

As I begin my second year, I look forward to taking one more turn 'round the dance floor.

Thank you all for making The Evening Class such a fun and rewarding experience.

The amount of dedication and hard work you've put into The Evening Class in the past year is a great example to us all...

Here's to not just one more turn around the dance floor but to a They Shoot Horses, Don't They?-style marathon...!

You're doing a dogged work that is both inspiring and erudite and immensely humane in its approach.

Keep up the great writing and we'll try to do the same with the reading. :)

Congratulations on completing your first year. We will be looking forward to your future contributions.

Congratulations, and thanks for all the great pieces that you've given us all the chance to dive into during the year. I'm glad I found your site as early as I did, I wouldn't have missed one update. Can't wait to keep track!

I think your work at TEC is industrious, critical, comprehensive and engaging. The extension and variety of interviewed directors and writers is extremely valuable. I look forward to work with you!
Best,

A most hearty congratulations on an incredibly producitve, and even more insightful and enlightening year. Your writing has inspired me, challenged my very conception of what the cinema and cinema journalism can and should be, pushed me in countless directions I couldn't have anticipated. I'm honored to count you as a new friend and can't wait to see what's in store for year two of The Evening Class and all your other projects!

GROUP HUG!! Heh. You guys are all swell and make me happy. Wish I could serve up slices of chocolately cybercake!

TEC sets the bar pretty high for the rest of us, Michael. The subjects and interviews here are fascinating and your writing is consistently great. Congrats! Here's looking forward to what you have in store for us in year two.

What you've accomplished in only a year is a true inspiration and has been an antidote to my cynical ways! :)

Bumping into you at festivals and screenings always lightens up the occasion!

Congratulations on a great first year!

Indeed, congrats! That number dosn't surprise me, though. I can't believe how quickly you get interviews recorded and posted...whenever I stop by, I have to scroll way down to catch the inevitable slew of posts that have gone up, seemingly in a flash. Here's to a second year!

Thanks Thom, Jay, Marina, David. I could just as easily say that the bar being set is by your sites. I genuinely appreciate moving forward into this realm with all of your guidance and camraderie.