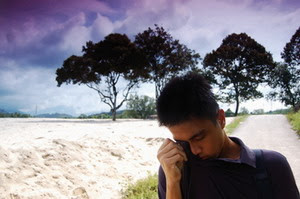 I gotta love the San Francisco Film Society. Not only did they turn me on to Malaysian cinema a couple of years back when they had their showcase during the International, but they continue to keep me abreast, via Dennis Lim at indieWIRE who—reporting Bayside from the International Film Festival Rotterdam—notes the "moment of heightened visibility" for Malaysian cinema, categorizes some of the "movement's" signature characteristics—"patient realism characterized by long takes, a fondness for ellipses, and a focus on stoic, alienated youth"—and alternate funding, and focuses on the latest ventures of the filmmakers introduced to San Franciscan audiences at the SFIFF Malaysian Showcase. Hopefully this new work will show up at SFIFF 50.

One of the best things that could have happened to help keep me in touch with Malaysian cinema has been the addition of Allan Koay ("The Visitor") to the Twitch team. Since he's been aboard he's posted an interview with Yasmin Ahmad, a trailer of her Berlinale-bound Mukhsin, an overview of what Malaysia offered in 2006 and what to expect in 2007, reviews of Ciplak, After This Our Exile, Possessed, Love Conquers All, and much more.
Posted by Michael Guillen at 2/07/2007 11:27:00 PM

Even better, hopefully the San Francisco International Asian American Festival will lessen the wait even further and bring some Malaysian cinema our way in March. They announce their schedule next Tuesday and I'm itching to see which films they were able to confirm.

You and me both, Adam!! Will you be at the Press Conference?

sadly, no. Day job constrains my movements during the day, so i'm left with having to settle for the occasional evening events. but i'll be checking the festival website all day Tuesday at work to see when the schedule comes up.