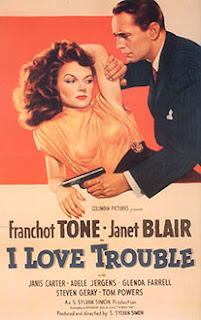 Muller expressed that the Roy Huggins tribute was what Noir City and the Film Noir Foundation is all about because the screening of I Love Trouble (1948) was actually a "re-premiere" in the sense of being a film that had nearly disappeared off the face of the radar screen, even the radar screen of Columbia Pictures who made the film. "I am very happy to say," Muller announced, "that when it all works out the way it's supposed to, we are able to twist a few arms where they need to be twisted and—lo and behold!—the wonderful people at Sony Pictures Classics realized, yes, we actually do have the original elements of [I Love Trouble] even though we don't have a print of it and, yes Eddie, we will move it to the top of the list and we'll get a new print made."

The Castro began cheering until Muller calmed them down. "Hold your applause. Because I'm not the one responsible for that. I want you to give a big round of applause to the person who really made that happen because she has such a phenomenal reputation in the business and has for so many years. The person who really got that done was Anita Monga." The crowd went nuts and began whooping and cheering and Muller encouraged them, "Make the walls shake!" I was very moved by this moment. Small recompense, to be sure, for how Anita Monga was treated by Castro management; but, a reminder that time tells all even if it doesn't necessarily heal everything.

"I also want to thank Grover Crist, Suzanne Leroy and Mike Schlesinger at Sony Pictures Classics," Muller continued, "for being kind enough to go through the trouble of making a brand new print. You are the first audience to see this brand new print of I Love Trouble. This is very special because—those of you who may have followed my books or heard me get up here and do this rap before—know that I am a big supporter of the writers of films as much as the directors of films. It is my pleasure to honor another writer this evening, Mr. Roy Huggins."

Eddie held up a book. "Now, the book that I hold in my hand is a paperback copy called The Double Take. This was Roy Huggins's first novel and it is the basis of the movie you are about to see. This is the most-filmed detective novel in the history of cinema. I say that because—even though I Love Trouble is the first version of this ever filmed—[The Double Take] has been filmed numerous times. On 77 Sunset Strip, Maverick, The Rockford Files, The Outsider, Baretta, The Fugitive—all shows written and created by Roy Huggins. He taught himself to write. He was going to be an industrial engineer but he taught himself to write by copying Raymond Chandler's Farewell, My Lovely in longhand so he would learn exactly how it was done. You will see the influence in this movie tonight. It is pretty clear. He went on to realize—y'know, writers don't get a fair shake in Hollywood unless they own the material—so he was someone who, when television came in, he embraced it wholeheartedly and started creating his own television series. Those that I just named are only some of the series that he created. I really think that, by far, the most noirish television series ever is The Fugitive. He created that. Maybe the best detective series ever, The Rockford Files, he created. Best western—I'm going to go with Maverick—he created that. In fact, you could argue that he created James Garner! James Garner said so himself, 'I owe everything to this man.'

"Roy Huggins lived to the ripe old age of 80-something. His style was fabulous. When he had to create a new television series, he would get in his big red Cadillac and drive from L.A. out to New Mexico with a tape recorder in the car. He would stop at various places along the way and he would tape record everything. When he got [to New Mexico], he had half a season. He'd write the second half of the season on the drive back to L.A. He'd come in, drop all the tapes on his secretary's desk and say, 'Have that transcribed. We've got a television show to sell.' That is pretty much how he did it. A pretty remarkable character. 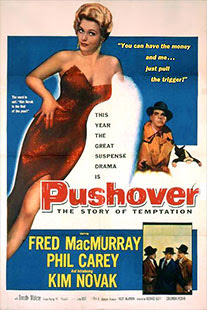 "So you are going to enjoy I Love Trouble. If you were hot for Janis Carter in Framed, she's back in I Love Trouble. And then our second feature—Pushover (1954)—is Huggins's screenplay adaptation of a novel by another fine writer named Bill Ballinger, which stars the redoubtable Fred MacMurray as a cop gone bad and—in her film debut—Kim Novak. If you want to know how to make a film debut, Kim Novak shows you in this movie when she enters Fred MacMurray's apartment and takes off her coat. If you don't think that Harry Cohn knew what he was doing when he said, 'Y'know, just forget the bra.' That's how Kim Novak becomes an immediate star. So, ladies and gentleman, I hope you saw that New York Times article on Monday about Noir City. I'd like you to know that today that story was picked up by the International Herald Tribune and now the entire world knows what's going on here in San Francisco!"
Posted by Michael Guillen at 2/02/2007 01:46:00 PM

I'm sorry I missed this moment of Monga-appreciation. I finally made it to Noir City last night for the double bill of Scarlet Street and Wicked Woman. The first I already knew was amazing, but with such a gorgeous print I was in noir heaven. Dan Duryea's performance is amazing.

Wicked Woman totally snuck up on me. Grade-Z trash of the most absolutely entertaining order. Actually pretty well-directed, considering!

Have you had any favorites from the festival yet?

I loved Cry Danger, despite the murky print, and look forward to it being restored and re-premiered someday. And was quite impressed with Dennis O'Keefe in "Raw Deal."

I took a couple of days off from Noir to attend Thomson's presentation of "Some Like It Hot" and (tonight) two African features at PFA; but, I'll be back at the Castro tomorrow evening for beefcake and then again on Sunday for Queen Crawford.