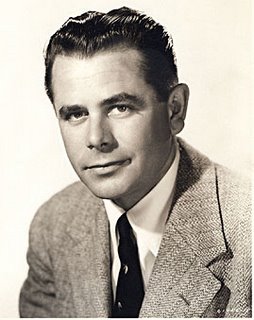 Fielding groans when he announced that Noir City 5 was officially halfway over, Eddie Muller quipped, "You wait all year and it's over so fast. That's what my wife says to me."

Glenn Ford always struck Eddie Muller as the actor Ronald Reagan wanted to be. Ford personified the same thing that Reagan tried to do on movie screens but couldn't quite accomplish until he moved off the movie screens onto the television screen asking for our vote. Muller isn't quite sure how Reagan pulled that off, but he did.

Muller expressed his happiness in being able to pay tribute to Glenn Ford. Though Ford lived to a ripe old age, he was not in good shape the last few years of his life and became "one of those dead-or-alive questions." It's too bad, Muller lamented, that the Academy of Motion Pictures Arts and Sciences never got around to giving Glenn Ford his due (nor the American Film Institute, Alan K. Rode—who was sitting next to me—whispered as an aside). As an actor, Ford had a career that reminded Muller that a man who builds a giant palace gets all the notoriety for his one palace whereas the guy who builds one thousand single-dwelling homes is somehow overlooked. That's how Muller perceived Ford's career: "Incredible longevity, totally believable in every performance he ever gave, in whatever genre it was—whether he was in a prowl car, on horseback, or being somebody's dad, or lover, whatever it was, Glenn Ford was totally believable because as he said, 'I'm actually not acting up there on the screen. That's just me.' "

Harry Cohn at Columbia Pictures was wise to realize that movie audiences would warm up to somebody who conveyed such an incredible everyman quality on screen, which is definitely—Muller asserted—what Glenn Ford did. When they teamed Ford with Rita Hayworth in Gilda after the war—where Glenn Ford had served with distinction in the armed forces during WWII—that kicked his career into high gear. Gilda enflamed the imagination of every guy in America because they thought, "Well, if Glenn Ford has a shot with Rita Hayworth, maybe I do too!" 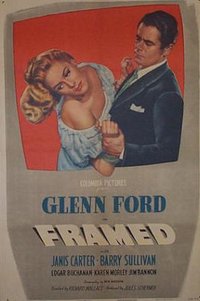 Ford went on to be incredibly truthful and great in a number of films, many in the roster of noir titles. For Noir City 5, Eddie announced, we would be seeing the film he made at Columbia Pictures after Gilda—Framed (1947), which Muller guaranteed we would love. "[Framed] is the kind of film that we talk about when we try to describe what film noir is all about," he explained. "Yes, there is an incredibly dangerous femme fatale in this movie. James M. Cain could successfully sue for royalties on this movie. This is the classic noir bump-off-the-spouse kind of deal." As a bit of trivia, Muller offered that the director of Framed, Richard Wallace, is a native of Sacramento, California. 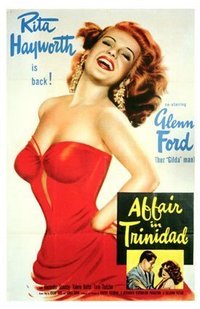 Along with having a grand time with Framed, Muller promised we would appreciate the reuniting of Glenn Ford and Rita Hayword in Vincent Sherman's Affair in Trinidad (1952). The programming didn't work out this way to pay official tribute to Vincent Sherman, who would have been 100 years old last year. He made it to 99 years of age. Not only did Sherman direct Affair in Trinidad but The Damned Don't Cry (1950), the film that will be closing out Noir City 5 on Sunday.

I had struck up a conversation with author Alan K. Rode before Muller delivered his introductory remarks and discovered after the fact that Rode attended and reported to Film Monthly on last year's Hollywood tribute commemorating Ford's 90th birthday where Ford—unable to attend in person due to poor health—delivered a poignant though diminished video message.

Equally informative are the obits Dave Hudson gathered together for The Greencine Daily when Ford passed away in August of last year.

But on the Castro's screen Glenn Ford was in his smoldering prime: angry and betrayed in Framed, wounded and enraged by jealousy in Affair in Trinidad. Sexy in his darkly compromised masculinity. He is definitely one of my favorite noir hunks.

There is a quartet of lovely musically-accompanied photo tributes to Ford at GlennFordonline.com.

If you get the chance, see the 1966 neo-noir The Money Trap with Ford briefly reunited with Hayworth.

Excellent tip, Peter! Thank you so much.

Maya, thanks for all the fabulous posts on the festival. If there was one festival I could go to, this would be it. Your informative pieces brought me a lot closer to it. Thanks!

Thanks, Buddy, it's such a wonderful festival. And seems to be growing exponentially each year. Hopefully one of these future years you can swing on over!

"believable in every performance he ever gave"? Must not have seen his Don José in "The Loves of Carmen" with Ms. Haworth!

What city was the film "Framed" supposed to be?