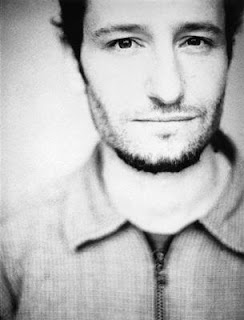 Along with the singular pleasure of sharing dim sum with Carlos Reygadas was the added pleasure of reading reactions to Silent Light—my favorite film from the 2007 Toronto International Film Festival—from two of my favorite Bay Area film writers. SF360's Max Goldberg explores the film's "stacked spirituality" and draws the line against "churlish critics who cry aestheticism."

"Reygadas' measured compositions, cutting, and camera movements are simply too fully integrated to be dismissed out of hand," Goldberg argues. "Reygadas' camera is an agent of compulsive, self-sustaining beauty. His use of the little jewels of light produced by shooting into the sun, for instance, is quite unlike any other I've ever seen." He describes the film's bookend shots as "two unfathomably elapsed dollies which seem to tear right into the fabric of space and time."

Goldberg's notation of the "little jewels of light"—i.e., the lens flares—in Silent Light encouraged me to pay attention to just how beautiful they really were, almost like colorful Calder mobiles. Especially noticeable in the scene where Johan and Marianne embrace and kiss on the hillside—which Reygadas affirmed was a one-shot take—it was clear this beauty was an accident of light and not something Reygadas intended. When I asked him about it later in the lobby he said that was exactly right. He attributes that accidental beauty to the lenses he was using during the shoot: Russian lenses from the 1960s.

Meanwhile, over at the San Francisco Bay Guardian Johnny Ray Huston—tinged with a touch of Christmas—asks if Reygadas's Silent Light is a holy light? He emphasizes that the film's opening and closing shots "has the audience seeing stars" and that Reygadas's vision is "stratospheric" with an uncanny "merging of the cinematic and the choreographic."

With some eloquent reservations—"Try as he might, Reygadas can never quite tell a straight story when he fixes his gaze on human subjects"—Huston nonetheless sifts wonder from the project, concluding that the film's "starry-eyed beginning and end prove that Reygadas's scrutiny of the ineffable is far from complacent. If cinema is a corpse, his kiss just might bring it back to life."

I found Huston's closing comment particularly insightful in light of Reygadas disclaiming that Carl Dreyer's Ordet was not the main influence upon Silent Light—as one too many critics have suggested—but, rather, the fairy tale of "Sleeping Beauty" where the kiss awakens Beauty.

During the Q&A after the Yerba Buena Center for the Arts screening of Silent Light, I seized the opportunity to ask Reygadas two questions.

Michael Guillén: First of all, Carlos, thank you so much for accompanying Silent Light to San Francisco. It's always such an insight to hear what you have to say about your own films. I don't want to deconstruct the symbolism of the film at all; but, I am very interested in the texture of the film. Could you talk about the scene in the van with the Jacques Brel musical clip ["Les Bombon"]? Where did that piece come from? How did you find that piece to include it in the texture of this film?

Carlos Reygadas: You know the Mennonites have something against television? Actually, against all graphical representation of human beings, even painting. That was very hard also for having them do the film; but, at that point, there had to be something on television. Of course, the typical thing would be to put the news, probably a soccer match, but then of course when you are doing a film you can decide what you would like the world to be rather than what it's meant to be. I love Jacques Brel so much. I lived in Belgium for three years. When I saw that performance that he does with all this energy, I was just moved to tears and I wanted to have him on the big screen. I thought it was very suitable also for the children, something very naïve and pure that they were watching. It doesn't always have to be pedophiles. Nowadays the whole world is turning so rough in that direction. I like children, for example, myself very much but I cannot go to parks anymore and talk to the children because people will become suspicious. I wanted something that was like, yeah, it's not always a pedophile. It can be a great guy just there showing them something very nice.

Reygadas: Actually, I didn't want any special effects in the whole film but, of course, I knew that the butterfly would be very hard. At a certain point I did ask a very good specialist to prepare a kind of maquette for the butterfly. It really looked like Hollywood, like Jiminy Cricket. It really looked ridiculous and I knew that would ruin the film if there was a butterfly like that so, in the end, I decided that it had to be a real butterfly. We captured a lot of butterflies. We let them fly in front of the camera and I was wasting a lot of film because it would always go in the wrong direction of course; but, thanks to all those takes, I had enough or sufficient material to use the real butterfly flying and we just had to digitally cut it and [superimpose] it on the text correctly to make it fly in the direction we wanted. But the thing is that the butterfly is a real butterfly flying; it's not digitally created. We're just redirecting and superimposing through an optical trick in the end. Even for the stars and everything you see in the film is optical. Everything you saw, I saw it with my own eyes. Of course, like the butterfly, we changed its course but it's a real butterfly.

I have just seen Silent Light at the Melbourne International Film Festival and can see now why you hold it in such high regard. I saw a late screening (ending close to midnight) and while sleep deprivation and festival fatigue have had me nodding off to films that don't grab me, I found Silent Light never less than compelling.

I didn't initially see the parallel with Ordet, and accept Reygadas' assertion that it was a minor influence. For me, it's neither here nor there. The experiences of seeing the two films are completely different. The aesthetics and intentions of the respective directors appear to have little in common.

The visual nature of the story-telling is phenomenal. What works most for me is the concept in practice that art is a way of seeing the world, that sublime art exists in the ordinariness of the everyday. The depiction of the little-known Mennonite culture enriches the mood of the piece.

I was a little confused by the shift in the use of languages. At times I thought it was Dutch, other times German and other times it was clearly Spanish. I now understand it was Plautietsch, a German dialect, and that the film was set in Mexico among a community of Mennonites.

I'm so glad you had the chance to see this wonderful film, Paul, and that you appreciated it as much as I did. Thanks for stopping by to comment.