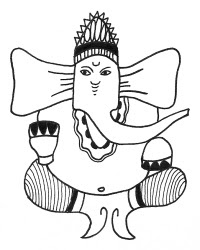 It's at this time of year that I begin wondering if there isn't some famous film score composer named Lists? If not, there should be. Until that's properly determined, however, I join the ranks of celebrated bean counters and offer up the first of a series of lists. My first list has been as much a joy to compile as it was last year. Girish Shambu is an inspiration not only for his honed skills at facilitating discussion on movie thematics, and for tolerating juvenile delinquents in the back of his class, but for tickling us with ink drawings to accompany his entries; less this year, I note, than in years past and I would be remiss in my role as critic not to mention that he has actually tried to pass off some old drawings as new work. Tsk tsk tsk. Notwithstanding, here are my favorite 10. 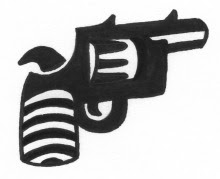 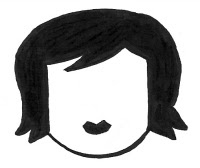 If it is true that all you need to make a good movie is a gun and a girl, Girish starts us off with those two essential elements. Granted, Sylvia may not have eyes for anybody; which is neither here nor there unless she's aiming that gun. 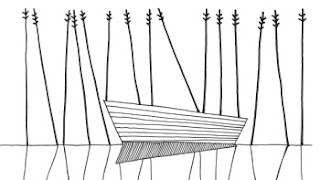 I absolutely adore "Pour La Suite Du Monde" whose simplicity captures tranquil reflection expertly. Girish has promised me a t-shirt, the likes of which I will probably never see (no doubt because of the way I've behaved in class all year, and which I vainly presume is the direct 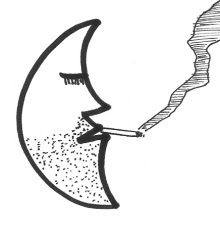 inspiration for his "Smoking Moon"), but now I have a second t-shirt to add onto the wish list. (Seriously, don't you think that if Girish started a line of t-shirts and sold them to his friends at, let's say, $50 a pop, he'd make a killing? I would spend hundreds, perhaps thousands, for the chance to grace a runway with one-of-a-kind Girish couture. Only a hint from the hinterlands.)

Last year Girish gave us a fish-scaled guitar; this year his guitar's gone all "swirly" on us. It raised my eyebrow, that's for sure. 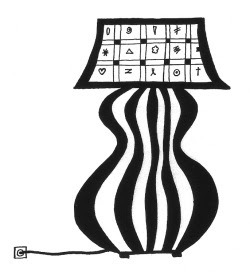 Also last year Girish illuminated the dark recesses of my mind with a pair of lamps, which he has likewise done this year. His Konichiwa lamp would look fabulous in my livingroom though—as much as I like it—the tassles on his second lamp might cause a flurry of rumors which I just don't have the energy to refute. 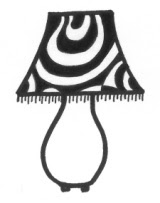 I love the movement in his dancer's skirt and her herringbone stockings are killer. 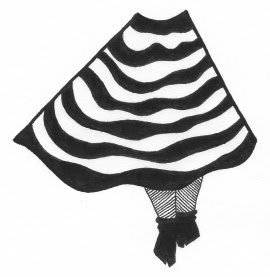 And that selfsame energy of movement decorates the kite that whips around in a sky whose clouds—as things go—have morphed into his end-of-the-year and beginning-of-this-entry Ganesh. 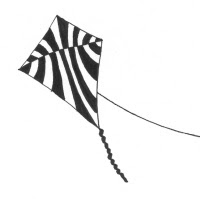 Tell Grish want that t-shirt too!!! Michel Brault's film by that name (English title is OF WHALES, THE MOON, AND MEN) was such a treat to watch a couple years ago at the PFA.

...you understand there will be a severe brokerage fee? Otherwise, I'm afraid it's just not worth my time. Heh.

can we ask girish to draw a self portrait? and would he like to draw a comic book script I'm writing? I love his drawings; every time I see them I feel like drawing again.

Michael – I’ve said it before and I’ll say it again: you are a genuine, generous soul and the blogosphere is lucky to have you. I’m speechless to see this post.

Late last summer, I spent an afternoon trying to make T-shirts of some of these doodles to send you but I couldn’t make it work. Target used to carry a particular 100% thick cotton T that worked well for the T-shirt transfers but they’ve discontinued it and the quality of their replacement is crappy, and ultimately defeated me after several botched tries. My aim now is to look around and ‘audition’ a few more T-shirt brands until I hit upon the quality/material I’ll need to make the process work. I’m sure I can do it if I look hard.

So I apologize that I haven’t been able to follow through on my T-shirt promise, but I do promise that when I get back to the States, a little bird will bring you a tiny package of drawings--You’ll have them by the end of January at the latest!

You know, sometimes when I finish writing a post on a Sunday night and I’m too lazy or tired to draw something to go with it, I reach into the archive and recycle a doodle from a year or more ago, thinking who would possibly notice (or care), but I’m clearly wrong! I shall resolve to limit recycling to a minimum in 2008…! I’ve just bought a new brush-pen (a combination of a paintbrush and an ink pen—I’m a big art-supplies geek) that is so cool it nearly draws pictures all by itself! I’m eager to press it into use.

Michael—Best wishes to you from the Shambu family in Chennai for a great 2008!