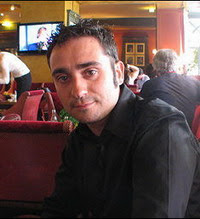 I had the opportunity to speak with Spanish director Juan Antonio Bayona twice this year regarding his debut feature The Orphanage, opening nationwide today. Our first conversation at Toronto will be published next month in my new gig movieScope (out of London); but, my more recent conversation here in San Francisco with both Bayona and scriptwriter Sergio Sánchez is up and running today at Greencine.

Dave Hudson gathers up the continuing critical response to the film—including his aggregates from Cannes, Toronto and New York—at The Greencine Daily.