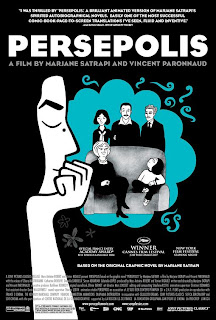 At the last minute the publicist for Persepolis phoned to apologize that Sony Pictures had cancelled my interview with Marjane Satrapi due to overwhelming demand. To trim the schedule, Sony Pictures narrowed Marjane's interviews down to print and TV/radio and eliminated all online requests. I was still on for Vincent Paronnaud—the other half of the directorial team—however, so I trudged down to the Four Seasons way early in the morning without even having the chance for a cup of coffee. Needless to say, I was drooling for caffeine while waiting for my interview with Vincent so Karen Larsen offered to take me up to one of the reserved suites where I could take advantage of the coffee set-up.

As chance would have it, inbetween shifting talent between suites and the publicist's makeup and hair person preparing to ready Marjane for her TV interviews, Marjane and I ended up in the same suite for about 20 minutes enjoying coffee together. Not an interview, just a chat, which really was much more enjoyable. I mean, what would I have to ask her anyway that hasn't already been covered by a plethora of interviews?

Marjane is a lovely, energetic woman with dark glinting eyes wise with humor and stern with honesty. It was so much fun to crack jokes and laugh. She signed the Persepolis volume for me by drawing an image of herself as a little girl, and then signed a poster as well.

She was, of course, exhausted with the non-stop publicity junket, which is a whole different animal than the festival circuit. She was—as Joni Mitchell would phrase it—"porous with travel fever." She pulled out a cigarette, which I enjoyed lighting for her. Smoking cigarettes is such a hazardous proposition in such cancer-conscious times and she is sick and tired of feeling guilty about it. She was very happy with a certain journalist recently who—while interviewing her—asked if he could bum a cigarette, then another, then another. He ended up smoking eight of her cigarettes, which delighted her. It freed her to chainsmoke with abandon.

Marjane commented that she loved San Francisco precisely because it feels "familiar." Unlike Los Angeles, choked by its freeway systems. The other night in Los Angeles she and her husband were taking a walk enjoying the full moon. They were stopped twice by police who wanted to know what they were doing. We're just walking, she told them. Why, they wanted to know. We're enjoying the moon, she responded. Which moon, they queried. We laugh. This reminded me of Ray Bradbury's prescient short story on just that subject.

Summoned by her hair and make-up guy, our conversation was cut short. I have to do it, she said, otherwise I look pale and sick on television. What are you going to do with your hair for the Oscars, I grinned. I'm going to poof it way up real big she laughed.