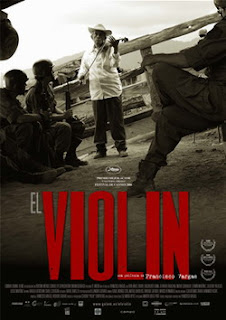 In 2007, Mexican films reaped a number of important international awards (Cannes, Venice, our own San Francisco International Film Festival) and kept the new Mexican cinema hot. Feature film productions in Mexico radically increased to nearly 60 films annually, in large part due to a recently enacted film tax incentive. Thematically and stylistically, Mexican films that circulated in 2007 at both film festivals and commercially were marked by a turn toward small intimate dramas about various forms of alienation and interpersonal communication; highly charged political dramas and documentaries about local and global social issues; and minimalist, highly poetic aesthetics that departed from the baroque styles of internationally celebrated Mexican directors (Alejandro González Iñárritu, Alfonso Cuarón, Guillermo del Toro). The following are some of the highlights of films I was able to see this year.

1. El violín (The Violin, Francisco Vargas, 2005). A powerful and lyrical portrait of guerrilla resistance and military repression in an unspecified time and rural location in Mexico (most likely in the state of Guerrero during the 1970s). Beautifully shot in black and white and reminiscent of master cinematographer Gabriel Figueroa's work, El violin features a mix of professional and non-professional actors, including Ángel Taviria in the lead role of the spunky and heroic octogenarian don Plutarco, an itinerant violinist who keeps alive through his music and actions the historical memory of peasant resistance from the Mexican revolution of 1910 to the film's present. 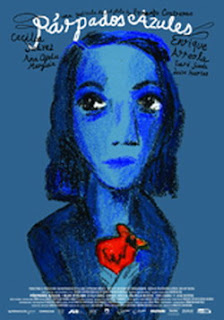 2. Párpados azules (Blue Eyelids, Ernesto Contreras, 2006). One of the standout films profiling Mexico's lonely people. What might a reclusive, socially awkward, 30-something working class office clerk do if she won two all-expenses-paid tickets to a Mexican beach resort? Why, invite a complete stranger to join her, of course! The film features stellar performances by Cecilia Suárez, who plays the mousy, doe-eyed, reclusive woman against typecasting and by Enrique Arreola (the pizza delivery man in Temporada de patos [Duck Season, Fernando Eimbcke, 2004]), playing the shy, non-descript office worker in charge of making photocopies. That is what happens in this bitter sweet comedy that is as sweet and melancholic as the color blue, yet shimmering with hope for its socially awkward lead characters.

3. Familia tortuga (Turtle Family, Rubén Imaz, 2006). A queer film on multiple levels focusing on a day in the life of a dysfunctional lower-middle class Mexico City family grappling with the one-year anniversary of the matriarch's death. Endearing and somewhat mentally handicapped uncle Manuel struggles to keep the isolated members of his deceased sister's family together: teenage niece (an angry, pothead kleptomaniac with a romantic streak) and nephew (a shy, butch homo played by the son of one of the Bichir acting clan) and their underemployed father. This meandering, cinema verite-like film has an ineffable vibe that makes this a most remarkable directorial debut. 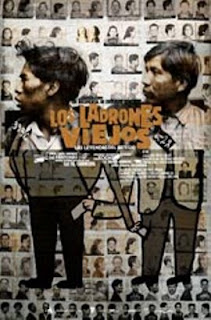 4. Los Ladrones viejos: las leyendas del artegios (Old Thieves: Artegio's Legends, Everardo Gonzalez, 2007). An utterly original and fascinating documentary about a generation of thieves who came of age in the 1960s that examines the code of honor of thieves, go figure. Narrated by a charismatic celebrity thief, El Carrizos, famous for having robbed the house of a Mexican president and featuring period archival footage of Mexico City, this film by a young but already noted documentary director launches a fierce critique against political corruption, notably ex-president Luis Echeverría and his henchmen.

5. Malos hábitos (Bad Habits, Simón Bross, 2006). Three loosely connected yet compelling and atmospheric narratives about eating disorders from one of the world's most noted directors of commercial advertising and producer of new wave Mexican cinema films such as Quién diablos es Juliette? (Who the Hell is Juliette?, Carlos Marcovich, 1997). 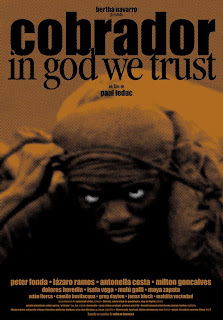 7. Año uña (Year of the Nail, Jonás Cuarón, 2007). I ended up really liking this film that I thought would be an irritating and gimmicky first feature by the son of acclaimed auteur Alfonso Cuarón. A love story of sorts about a young Mexican teenager and a slightly older middle class, college American woman studying Spanish in Mexico City during a summer, it uses all photography (gradually changing from black and white to color) and voice-over narration in Spanish and English. Starring Diego Cataño (the doe-eyed youth in Temporada de patos) here playing a middle-class teenager with raging sexual hormones. 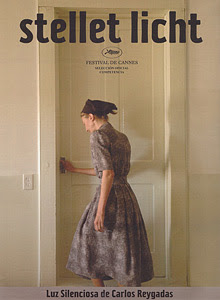 8. Stellet licht (Silent Light, Carlos Reygadas, 2006). In spite of the fact that this film is nowhere near as interesting as the director's previous work (Japón [2002], Batalla en el cielo [Battle in Heaven, 2005]), nonetheless you have to give kudos to anyone who makes a film about marital infidelity and resurrection among Mexican Plautdietsch-speaking Mennonites in the state of Chihuahua. The most compelling aspect of this film was the painterly cinematography by Alexis Zabe who shot Temporada de patos. Awarded a jury prize at the 2007 Cannes International Film Festival.

9. Partes usadas (Used Parts, Aarón Fernández). A notable return to the miserabilist aesthetic that characterizes Mexican cinema internationally (because it sells well). Unlike more recent films about poor Mexico City youth such as De la calle (Streeters, Gerardo Tort, 2001), this debut feature doesn't exploit the plight of its two main young adults but gives them a way out: Los Angeles, the promised land. This homage to youth involved in the underworld of stolen cars and car parts, distinguishes itself from others through its textured look and use of classical music rather than rock en español.

10. Eréndira la indomable (Erendira the Indomitable, Juan Mora Catlett, 2006). The imagery of Indian codices and a self-conscious use of theatrical staging combine in this refreshing complimentary narrative to the tired foundation nation-building Malinche narrative, in this case ostensibly focusing on an indigenous woman warrior who fights against the Spanish invaders and her own people's patriarchal sexism. A unique film because the dialogue is almost entirely in the Purépecha language.

I screened most of the films that make up this list at the 2007 Guadalajara International Film Festival and also at the Mexican Film Institute (IMCINE). I thank both institutions and the University of California, Davis for their generous support.

* * *
[The Evening Class, in turn, wishes to thank Sergio de la Mora for his generous insight into this year's crop of Mexican films, many which have not yet found their way stateside. I adopt his list as a wish list of films I hope to see in the near future. I note that Párpados azules is an official selection in the World Cinema Dramatic Competition at Sundance 2008.—M.G.]

01/24/08 UPDATE: Brian Darr picks up Sergio's recommendation to watch Párpados azules at Sundance 2008 and reports in to The Greencine Daily: "[I]t's among the best films I've seen at this festival so far."

I loved Stellet licht, El violín,
Párpados azules, Familia tortuga (in this order).
I agree Reygadas's third is not as interesting as his previous 2, but it's still one of the best this year.
El violín, of course, a wonderful storyline angle : the guerilla from the contemplative side of the dominated people.
Párpados azules is a really surprising film, based on a very simple premise and elaborated at length about the depth of mundanities.
I didn't perceive Familia tortuga as a "queer film", it's a little abusive to pigeonhole it that way. There is one character in the ensemble who is a (closeted? coming of age?) gay, but the drama hardly develops this aspect. It's a family drama above all.

And I'd add Pedro Aguilera's La Influencia, which is a wonderful contemplative film, a cross between Nobody Knows and Sangre. I don't remember where it takes place exactly, but I believe it's in Mexico, right?

A very promising year for Mexico indeed. I make note for the ones I haven't seen yet on this list.

Thanks for stopping by to comment, Harry. You're so lucky to have already seen these films. Where did you get the chance to see them?

I'm sure that Sergio's perception of Familia Tortuga as a "queer" film is his pleasure in reading the film that way and hardly an effort to pigeonhole it. Both Sergio and I often queer film and have discussed between ourselves at length the importance of doing so, if only for ourselves and no one else. Sergio is, in fact, quite qualified to indulge himself that way. He is the author of _Cinemachismo_, a study of Mexican masculinities. If you were to read his book, I imagine you would understand more what he's doing when he's queering a film, which I wouldn't categorize as "abusive" in the slightest. Queer spectatorship is a marginalized and imaginative endeavor.

Stellet Licht and El Violin had a nationwide release in France already. And I saw the other 3 at the exceptional screening of Cannes films in Paris.

Well I'm not judging his right to use the word, of course. I guess you can "queer" every film (like Westerns) even without gay issues, for interpretative analysis purpose. But marketing it that way to the public might not be fair assessment.

The character realizes he prefers his soccer buddy to the a cute girl who stalks him in high school (pre-gay awareness). And that's only a character's background. I guess it's obvious with hindsight.
The uncle and the sister are more important characters (in my memories).
The heart of the film is the funeral of the mother and the psychological crumble of the family nucleus going through all the financial hassles ensuing.

How neat that the Cannes films were brought to your very doorstep!! No less than you deserve, eh? Heh.

What about drama/mex? My personal list would have silent light in first place and then the brilliant drama/mex. Then the violin, the last gaze and never on a sunday. I cant wait to see parpados azules y familia tortuga

Thanks for your added input, Carlos. Much appreciated!