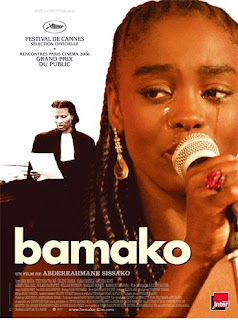 It isn't up on their website yet nor have I received their latest calendar, but the publicist at Pacific Film Archives gave me a heads-up on the African Film Festival program line-up so, naturally, I'm passing it on to you because January and February are going to be rich with cinema in the Bay Area and you might want to start juggling dates now.

This year's African Film Festival runs January 24, 26, and February 7, 9, 13, 17, and 28. They've expanded from last year with an offering of 15 films, both new works and favorites from the international festival circuit. Included are a sidebar on Mauritanian director Abderrahmane Sissako (Bamako, Heremakono (Waiting For Happiness), La Vie Sur Terre (Life on Earth), and Rostov-Luanda); two rarely-screened short films by Ousmane Sembene; The Forgotten Man and A Love During the War, by feminist Cameroonian director Osvalde Lewat-Hallad; Il va pleuvoir sur Conakry (Clouds Over Conakry), which I recently caught at the Mill Valley Film Festival (and can recommend); Juju Factory, a drama about Africans living in Belgium; Lumo, a documentary about women recovering from the horrors of war; and short films from Zimbabwe, Nigeria and Lesotho.

I've extolled Sissako's Bamako several times here on The Evening Class, first from the 2006 Toronto International Film Festival, and then in an amplified recap from the 50th San Francisco International Film Festival, where I was likewise given the opportunity to interview Danny Glover for Greencine. I've also posted Franck Garbarz's interview with Sissako, courtesy of New Yorker Films.

With regard to the remaining Sissako films on the PFA program, I'm particularly looking forward to finally seeing Heremakono (Waiting For Happiness)—which comes highly recommended—and I, in turn, heartily recommend Acquarello's write-up on Rostov-Luanda. Acquarello and I have likewise shared some comments on Il va pleuvoir sur Conakry (Clouds Over Conakry) over at Strictly Film School.

I am completely unfamiliar with the work of Osvalde Lewat-Hallad, as appear to be both IMdb and Wikipedia, which makes me all the more curious. If anyone is familiar with her work, please speak up.
Posted by Michael Guillen at 12/15/2007 02:32:00 PM

This has nothing to do with African cinema but I am not sure where else to post this question. A while ago I remember you had interviewed Tony Gilroy and you asked him about the horses scene in Michael Clayton? I would like to hear your take on that scene.

My reasoning is that the horses reminded Michael of Arthur because of one scene where Arthur told Michael "to go the horses" or something along those lines.

Sachin, Michael Clayton is a far stretch from African Cinemas, but, I don't mind the drift. My interview with Gilroy was for Greencine and they have elected to post it upon the DVD release. I'd hate to step on their toes about that so I'll send you my thoughts via email, if that's okay.