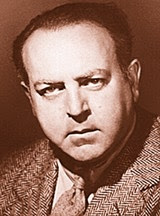 It's about time The Evening Class hosts a blogathon, don't you think? And in tandem with the Turner Classic Movies premiere broadcast of Martin Scorsese's new documentary Val Lewton: The Man In the Shadows on Monday, January 14, 5:00PM PT, I thought now would the perfect time for this perfect opportunity.

So I'm announcing the Val Lewton Blogathon starting Monday, January 14, 2008, and running throughout the week so that writers can either react to the TCM program lineup or wax eloquent from memory on their favorite Lewton film.

The following is the schedule for the premiere and marathon of Lewton classics (all times Pacific):

12/11/07 UPDATE: The Film Society of Lincoln Center's "homegrown talent" Kent Jones, their Associate Director of Programming, Film Comment's Editor-at-Large, and author of Physical Evidence, a recently published collection of film criticism, will be hosting an advance screening on Thursday, December 13, of Val Lewton: The Man in the Shadows, which he likewise wrote and directed. The documentary will be followed by a screening of I Walked With A Zombie (1943). Details can be found here.
Posted by Michael Guillen at 12/06/2007 04:54:00 PM

Wouldn't miss this one if I was chained to a wall and had to type the whole thing with my left hand.

The only question is: will I use the occasion to finally see the last RKO Lewton I've been saving up to see: Isle of the Dead, or will I write on a rewatched old favorite, of which there are plenty of options...

Thanks for wanting to take part, Brian. Val Lewton has long been one of my favorites. I turned on to him when I opened my video store in the San Joaquin Valley and it gave me great pleasure to introduce his films to that community.

Michael, in the last year or so, I've picked up a couple of interesting books on Lewton movies: Icons of Grief: Val Lewton's Home Front Pictures by Alexander Nemerov; and Chris Fujiwara's book on the films of Jacques Tourneur. For the Lewton fan, they're well worth a look.

With the TCM broadcasts and new Lewton doc this will be a pleasure, Michael. Not too sure if/what I'll post though I've been meaning to dig into Youth Runs Wild. Either way I'll positively be there.

Thanks for your encouragement Girish and Thom! Spoke with Andrew Bailey, author of CINEMA NOW, last night at the Paranoid Park screening and he said, absolutely, he would love to talk with me about I Walked With A Zombie. And TCM is hooking me up for inteviews with Val Lewton's son, writer/director/film critic Kent Jones (who's hosting an advance screening of the documentary at Lincoln Center), and Ann Carter, the child actress (now grandmother) of Curse of the Cat People. Along with Mark Vierra agreeing to talk to me about Lewton, that will be a whopping quintet. I feel like I'm making my own documentary and for the first time in my life am thinking how I might want to do research writing for documentaries.

I haven't participated in a blog-a-thon in ages. I've promised to contribute to a few since the last time I actually did, so I'm hesitant to "commit" to this one, but I've wanted to write about I Walked with a Zombie (1943) and/or The Leopard Man (1943), both brilliant films, since I first saw them, so this is a perfect opportunity to jump back in!

That sounds great, Andrew. And if now isn't quite the right time, do it when you can and I'll always be happy to add it into the stew. That's the wonderful thing about online writing. It stays out there for people to come to when they're ready. My greatest satisfaction with this blog is when I get email on an entry written a year ago.

It should be noted that Youth Runs Wild is not available on any home formats, so take advantage of that showing on TCM.

When you talk to Ann Carter, maybe you can find out about Curse of the Cat People having two credited directors. In terms of Robert Wise's films, there is a clear link between that film, The Haunting and Audrey Rose.

As for the dual directorship on The Curse of the Cat People, it's been well-documented in both the Scorsese/Jones documentary premiering on TCM and on the documentary included in the Val Lewton Horror Collection--Shadows in the Dark--that Lewton, ever the champion of young directorial talent, greatly admired the work of Gunther von Fritsch and brought him in to direct Curse of the Cat People. Gunther, however, proved to be too much of a perfectionist and within the first two weeks of shooting the production fell five days behind. Thus, Robert Wise was brought in to finish up the film and get it back on schedule.

Wise has also gone on record as saying that The Haunting was an intended homage to Lewton and how much the man helped him in his early career.

Are you gentlemen sure that Youth Runs Wild hasn't been released on DVD at some point? There's a version of it floating around the 'net that's labelled as a DVDrip...

Regardless, a wonderful idea for a blogathon, Maya! I hope to contribute something, and hopefully something about Youth Runs Wild. Which, incidentally, I IMDB'ed and found was written by John Fante.

It will be great to have you particiapte, Pacze! You bring such a keen eye to whatever film you write about.

I'm in, if you'll have me, and have announced the blog-a-thon on my humble dot of webspace.

Absolutely, Arbogast! And thanks so much for helping to get the word out.

Hey Michael - I attended Kent Jones' screening tonight and I'm going to blog about it now. Would this be too early for the blog-a-thon? I'd wait but I'm afraid I'd forget a lot if I did.

Alsolikelife, how cool you got to attend the Jones screening!! If I were you I would write about it while your impressions are fresh and then I'll make sure it gets scooped into the brew come January.

I never heard of Val Lewton.....but the commercial teasers have me interested!

I envy you your experience of coming to the Lewton ouevre with brand-new eyes, Kath. I hope you're able to catch some of the TCM programming and please come back to report on your impressions.

Agreed Maya......there is childlike wonder when one comes upon something new and exciting no matter what your age!

A final comment ----- the l962(?) The Haunting is my number one favorite....Shirley Jackson had to smile with Wise's work.

My colleague, Rod Heath, will be reviewing Isle of the Dead, and I'll probably do one, too, but haven't decided yet.

Is there somewhere I can e-mail our link once it's up?

Marilyn, I'm delighted you and Rod are planning to participate! Once you're ready to go you can either let me know via a comment or email me at michael.guillen@gmail.com

Hello... I would love to participate in the Val Lewton blogathon if it's not too late. Count me in for a post on "The Leopard Man".

Great news, Fox. No, you're not late at all. The blogathon doesn't officially start until Monday, the 14th.

Depending on your perspective, I'm either very early or very late :p I came across earlier today and luckily I had a very recently wrote up review on my favourite Val Lewton The Body Snatcher:
http://houseofmirthandmovies.wordpress.com/2008/01/14/val-lewton-blog-a-thon-the-body-snatcher/

THank you for hosting this, Lewton can never have enough love!