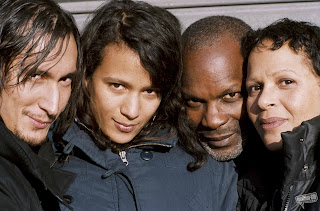 For some it is difficult to retire the past, for others impossible, and—in the case of a dead cat—for at least one fellow it's comically effortless. Claire Denis' 35 Rhums (variously translated as 35 Rums and 35 Shots, and best conflated as 35 Shots of Rum) is her melancholic ode to recompense and reconciliation in the face of irretrievable loss. 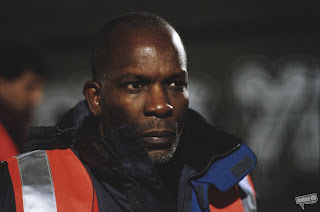 Lionel (in a charismatically understated performance by Alex Descas) has lost his wife; Josephine (Mati Diop) has lost her mother, and their shared grief is held in "incestuous" abeyance, both reluctant to let go of their family's past shape to honor future incarnations. Lionel resists Gabrielle (Nicole Dogue) who aggressively dreams of stepping into the void left by his wife to become Josephine's surrogate mother; Josephine resists Noe (Grégoire Colin), the hopeful young man upstairs who courts her attentions faithfully against memory's odds. They all reside in the same apartment house where breaking Lionel and Josephine's "incestuous" enthrallment is the film's thinly-guised homage to Ozu's Late Spring. "Incestuous" is—as Rob Davis has complained in the comments to this entry—a hard and seemingly inexact adjective but it serves my thought in that it connotes—not a literal sexual relation, of course—but a psychological substitution wherein a daughter is replacing a wife's role in a dynamic that becomes emotionally hazardous and unhealthy. It's not just about serving Dad dinner or ironing his shirts—that's too simplistic—and more about subsuming an inappropriate role where too much affection hazards an erotic valence curtailing appropriate erotic expression. Lionel recognizes this, it angers him, and he asserts his independence in hopes it will encourage Josephine to pursue true wifehood. In other words, I'm using "incestuous" in its alternative dictionary meaning as "being so close or intimate as to prevent proper functioning." It's a spell of grief that needs to be broken in order for both husband and daughter to let go and move on. 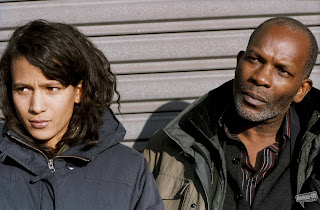 With a nocturnal palette of "yellow and TV blue windows" and sinuous night trains curving the rails, Denis establishes a mise en scène of urban loneliness early on in 35 Rhums, emphasized by repeated night rides home (either on motorbikes or taxis or rendered in one rapturous poetic image as father and daughter gallop on horseback over the tracks). Both darkness and loss are held at bay with lit interiors and—in yet another lovely sequence—children's paper lanterns ward off the dusk. Love ultimately shines forth and appropriate relations established; a cause for a celebratory toast of the titular 35 rums.

For what it's worth, Denis calls the film 35 Shots of Rum in English, even though the subtitles say 35 Shots.

I have to take issue with the word incestuous. I've only seen the film once, but I'm fairly certain that Denis didn't intend for this to be about incest, if you mean the term literally. Her films often acknowledge a physical bond among familes -- US Go Home, Nenette et Boni, Trouble Every Day -- and when talking about that last one she often referred to the phrase that mothers use with their children, "I could just eat you up."

I don't think the relationship between the widower and his only child, a daughter, in 35 Shots of Rum is any more incestuous than the same relationship (widower/daughter) in Late Spring or An Autumn Afternoon. It's unhealthy only because the daughter needs to recognize that it's time to leave home, move on with life, and know that her father will manage the cooking on his own.

Hey Rob, thanks for the comment. Hope you've been enjoying your festival. Haven't seen you since 35 Shots of Rum. I absolutely do not mean "incestuous" literally; I was qualifying the "abeyance" and the "enthrallment" by the only word that seemed to fit. And for what it's worth, I thought the same thing of Late Spring. It's hard not to have more time to write more clearly; but, I promised my editor at Twitch to crank things out during festival. I let them stand for now and will tweak them when I get home and have time. I doubt very much though that I will change the adjective "incestuous"; it works for me.

...and as a postscript, I would of course defer to your knowledge of Denis's films, since I know you have studied her extensively and interviewed her and whatnot.