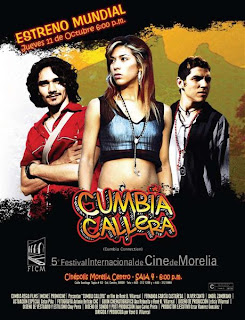 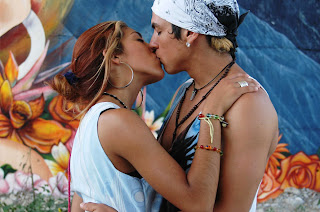 Located just a few kilometers south of Texas, Monterrey bears evident American influence and—despite the fact that its inhabitants are deeply Mexican—its youthful underclass passionately identifies with Colombia, especially Colombian music. These colombianos have appropriated Colombia's cumbia and vallenato dance forms into their popular culture by first imitating and then recreating them into something expressly their own. Thus, as Villareal explains it, Colombia for these young people does not have to do with the geographic Colombia, but refers instead to "some sort of 'Colombia of the heart', in the sense of it being an imaginary, symbolic homeland, that gives the 'colombians' of Monterrey a deep feeling of belonging."

They are, more accurately, "cholombianos" and Cumbia Connection is a kind of "Cholarella" fairy tale where—instead of losing a glass slipper—the sensually vibrant La Cori (Fernanda Garcia Castañeda) loses her shoplifted pink Converse sneaker, which is returned to her by her "lousy prince" in pursuit, the middle-class wedding videographer El Neto (foxy Oliver Cantú). The fairy tale is complicated by the fact that La Cori already has a boyfriend, the buffed, mohawked muralist/construction worker El Güipirí (Andul Zambrano). What ensues is a sexual and creative competition between the two young men for the favors of the irresistable La Cori who arrives at the somewhat sluttish—i.e., admirable—conclusion that maybe happiness means she doesn't have to choose between her two paramours afterall? As long as they both worship her, what's the problem? "Happily ever after" in her fairy tale means a lusty, working ménage-a-tois. 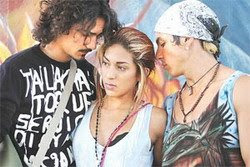 Cumbia Connection is a musical where the filmic narration is built through songs composed and played especially for the film. "The narration," Villareal explains, "rests deliberately on the image and not on the dialogues." As Harvey phrases it: "Near-incessant, easy-rolling songs by local artists figure prominently in, and sometimes comment on, the slight but ingratiating narrative." The convention especially works if you love cumbias. Here's hoping you do. 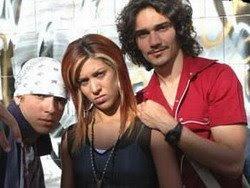 Winner of the "Tatú Tumpá" as Best First Work at the Ibero-American Film Festival in Santa Cruz, Bolivia; as well as Best Film–Perspective at the Moscow International Film Festival, Cumbia Connection will have already been out for a couple of weeks on DVD before its Mill Valley screening.