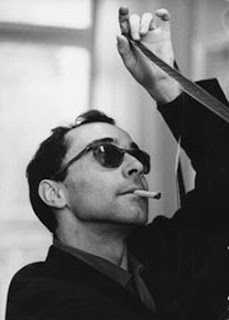 Yes, it's enjoyable to catch the new crop of films at the Toronto International, but an equal pleasure to return home just in time to take advantage of the Pacific Film Archive's affectionate retrospective—"Movie Love in the Sixties: Jean-Luc Godard"—with this evening's screening of Breathless. If Christ's death measures time as we know it; Breathless measures cinema as we know it. Though I've missed Band of Outsiders, Contempt, and Vivre sa vie, I'll be joyfully revisiting the trembling excitement of Breathless, Two or Three Things I Know About Her, A Woman Is A Woman, Masculine Feminine and Alphaville. September is back to school afterall.

PFA Publications Director Judy Bloch quotes a throwaway line of dialogue from Band of Outsiders—"Are you cold?" "No. I'm trembling with excitement."—to begin her preface to the Godard retrospective because she feels it "perfectly captures the romance of Godard's cinema of the 1960s, in which he broadened the convention of on-screen love to embrace a wide entrancing world: this was movie love."

She quotes Godard's own description of his Band of Outsiders mood: "Characters who live off the cuff . . . It is not the people who are important, but the atmosphere between them. Even when they are in close-up, life exists around them."

And she continues: "Even in the clinch it was not unusual to find Godard's camera wandering off to dwell on passersby, movie posters, cafe fronts, the life of the street at least as important and philosophically rich as the life of the individual. By the time of Two or Three Things I Know About Her, the 'her' in the title was not a woman at all, but Paris itself.

"Still, if Godard was the artist, his then wife Anna Karina was the model; together they explored the prism of her persona from every angle to look at love, or something like it, in a half-dozen films. Whether tentatively confident, as in Band of Outsiders; determinedly ambiguous, as in A Woman Is a Woman; or tragically self-knowing, as in Vivre sa vie, it is Karina who grounds Godard's notions about women in the real. Before Anna: Breathless. After Anna: Contempt."