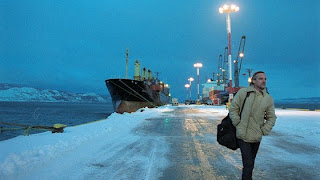 "And you want to keep moving / and you want to stay still / but lost in the moment some longing gets filled…"—Joni Mitchell, "Barangrill"

They say the cleanest line of nature is the horizon and whether one empties one's longing gazing from sea to land or land to sea, from the present to the past and back again—shifting projections from one to the other—the gamble is that desire (configured as what one looks for or looks at) will somehow fulfill you. In Lisandro Alonso's Liverpool, the longing to remember and to be remembered is so intense it measures as body's grief, moreso than the body of desire. Movement becomes the only available fulfillment and memory itself becomes the effort at remembering. The most token of connections becomes all that's left to hold onto of origins, lineage, and family.

Spatiality governs and informs Alonso's Liverpool. Interiorized spaces contrast against vast expanses of nature (both literal, and simulated as when Farrel (Juan Fernandez) eats a meal in a restaurant whose murals are an autumnal birchwood forest). Small ship compartments, small households, feebly contain the thoughts otherwise emptied into wintry landscapes. Compromised subjectivities contrast with compromised social spaces. Alonso places his camera to capture them all, large and small, thereby expressing the home one escapes and returns to, and the wandered distance between Liverpool and Ushuaia, the southernmost town of Argentina. 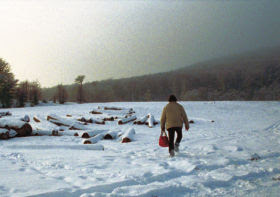 Liverpool is composed of beautifully articulated images. Dark long-eared rabbits in the snow. Snowcapped mountain ranges. A poster of Jesus pinned to the inside of a door. Farrel sitting alone at a long red table set against a green wall. Farrel's eyebrows raising in bemused disbelief when Analia (Giselle Irrazabal) asks him for money and what her request tells him. What he must feel when his frail, ailing mother tells him she was just a little girl when he had already grown tall. By accretion, not through narration, a story is told.

During an Atlantic crossing, Farrel asks the captain of the freighter he is sailing for permission to go ashore at the next port. He wants to visit the place where he was born to find out if his mother is still alive. Alonso explains: "What interests me in Farrel, the main character, is what he gets from the world he lives in, his submission, his loneliness, his lack of motivation and his lack of hope that something might change, that his life might be different, that he might have the possibility of relating to someone without distrust, without thinking he will be ill-treated. I would like to try and see what goes on in his head full of dark, blurred memories and hangovers. I wanted to follow the steps of someone running to hide away when he sees someone approaching, who does not want to communicate, who wants to be on his own, and whose single unsettled debt is with his mother, who can barely breathe and who cannot communicate with others anymore. I would like to film his face when he learns that he has a new, very close relative, younger than him, who lives in the same town and sleeps with anyone to survive and who supports his mother. And in the end I would like to see if that encounter can change the way he lives, if those two people will let themselves feel something they have never felt for anyone else before, if finding a relative whose existence they were not aware of can change their view of the world." 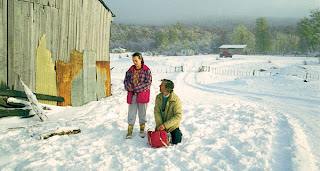 At The Greencine Daily, Dave Hudson gathers the critical response from Cannes08. At Senses of Cinema, Markus Keuschnigg writes that Alonso's Liverpool "basically continues the corporality of his previous films" but that—though "satisfying enough" as a film—"it lacks the profound coherence of his "trilogy"—La Libertad (2001), Los Muertos (2004), Fantasma (2006)." At Film Comment, Kent Jones is eloquent in his appreciation of Alonso's aesthetic. "Alonso is a fascinating figure," Jones explains, "who probably thinks more about form than any other narrative filmmaker his age. His attempts at overall unity are impressive if not fearsome, even when he miscalculates. At his finest, Alonso settles on journeys that accumulate observation (of landscapes and ways of life) that expand along the way into collectively internalized visions of existence and their horizon lines." These are qualities that fans of Alonso have come to expect. What is unexpected in Liverpool "is the unforced grandeur of the narrative/formal/thematic arc: out at sea one longs for land, and stuck on land one dreams of sailing over the horizon."

09/15/08 UPDATE: Dispatching to The Greencine Daily from Toronto, Michael Sicinski writes that "Alonso has achieved a new confidence and a sense of purpose that has lost none of its mystery despite having become as clear as crystal." Equally impressed with the film's spatiality, I concede to his much sharper analysis: "[T]he presence of Farrel in his steel bunk or working the boiler room provides a claustrophobic and also a comforting, cradling new environment for an Alonso protagonist. Compositions can settle around the figure without undue agitation, and the ship's hull allows for totally new qualities of light that have previously been absent in Alonso's work, such as the collision of fluorescent and incandescent bulbs at dusk as Farrel offboards the ship to begin the journey home. The obviousness of Alonso's structure here, from an enclosed metallic world into an open, snowy landscape, takes nothing away from the visual and spatial experience that Liverpool creates within this structure, and in fact, as with many avant-garde projects, Alonso's benefits greatly from the imposition of this objective shape."

Just released on DVD in the UK by Second Run DVD - and includes Lisandro Alonso's 2011 short film Untitled (Letter for Serra) + a newinterview with Lisandro Alonso.