Synecdoche, New York is going to be a hard sell in Schenectady, New York; and not just because it starts right off with a titular pun more inclined to make a crowd of linguists chuckle than your average crowd at the multiplex. In my book, that's a good thing. For his first directorial effort, Charlie Kaufman proves there's still a trick or two left to the magical art of moviemaking; especially when imagination is the confused rabbit pulled out of the tophat. This is the movie that should have been preceded by the animated short Presto.

A dark mindtickler, Synecdoche, New York is a bardo state left waiting for that final trim in a barbershop of mirrors. Perhaps not so ironically—instead of a trim—things get shaggier and shaggier, which ultimately reflects Kaufman’s mentally-drenched tale as something flawed but heartfelt, cathartic and hopelessly human.

Originally configured as a horror story, Kaufman borrows a cue from Jacob's Ladder but envisions it with the relative perspectives of M.C. Escher. The ladders in Synecdoche, New York aren't Biblically simple; they go up, down, sideways, backwards, forwards, and even bend a little caught in the gravitational compression of Kaufman's black hole of an imagination. Wrestling with a single angel seems simple by comparison. Never before has directorial control seemed so inaccessible, if not downright impossible. 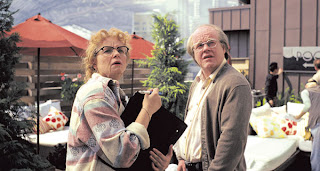 As synopsized earlier, worried about the transience of his life, theatre director Caden Cotard (Philip Seymour Hoffman, in an—as ever—compelling, compulsive performance developed from the inside out) leaves his home behind and sets out to construct a massive artistic enterprise. Gathering an ensemble cast into a warehouse in New York City, he hopes to create a work of brutal honesty. He directs his actors in a celebration of the mundane, instructing each to live out their constructed lives in a growing mockup of the city outside. The years rapidly fold into each other, and Caden buries himself deeper into his masterpiece but the textured tangle of real and theatrical relationships blurs the line between the world of the play and that of Caden's own deteriorating reality. With strong performances by an admirably supporting female cast which includes Jennifer Jason Leigh, Catherine Keener, Dianne Wiest, Samantha Morton, Michelle Williams, Emily Watson and Hope Davis, Synecdoche, New York exalts the reiterative, the replicative, and the recursive as the stage becomes crowded with doppelgangers, triplegangers, and quadruplegangers. Learn how it’s really done, Michel Gondry!

At The Greencine Daily, Dave Hudson gathered the critical response from Cannes08. Additionally, in his Cannes report to Film Comment (July/August 2008, pp. 59-60), Gavin Smith observed: "Not known for its patience, the by-now-weary press corps was in no mood for a meandering, over-extended comic evocation of solipsism, and responded with apathy if not antipathy. Which is a pity because it's a pretty interesting first directorial effort by an unruly but original talent. …Sprawling, confusing, and marred by strained and turgid passages (particularly in the first half), Kaufman's film nevertheless steadily builds toward a genuinely cathartic ending, carried along by Jon Brion's increasingly mesmerizing score. A melancholy comedy about terminal self-absorption is a hard sell, but this is a film of real ambition and unlike anything else around."

Logan Hill interviewed Catherine Keener for the Fall Preview issue of New York Magazine while at Spout Blog, Brandon Harris interviewed special effects supervisor Mark Russell. At The Guardian, John Patterson felt the film's 130-minute length was "a life sentence." For me, however, Synecdoche, New York is an eloquent sentence with a whole life in it.

Hi Maya, - Thanks for your thoughts on Synecdoche, New York! I was so frustrated by many of this year's Cannes reviews; especially for this film they all seemed to hastily written to be anything to go by.

So your links to FilmComment are very much appreciated; personally I'm sure this film will end up being one of my favorites of 2008. It's just simply my kind of movie.

Enjoy TIFF. You should see "O'Horten" by my fellow Norwegian Bent Hamer.

Thanks for checking in, Karsten. In fairness to critics writing reviews from Cannes, it's not easy. I'm having trouble keeping up here in Toronto. I much prefer having time to think things through. Even with these reviews, I hope to tweak them some when I'm home and have the time. For now, they stand as time affords.

I certainly want to see this film again. It warrants a few viewings; it's so richly layered.

I'm even more psyched to see this film on Thursday now than I was before (and I was already pretty psyched). Normally I worry about building up my expectations too high for something like this, but I truly don't know what to expect given many of the reviews I've read - except that it should rattle around in my brain for days afterward...

Don't be dissing Gondry though! B-)

Though I was shut out of O'Horten (my only first choice pick that didn't come through), I did see Eva Sorhaug's "Cold Lunch" which I greatly enjoyed. One of my faves so far along with Iceland's "Country Wedding", "Still Walking" and "C'est Pas Moi, Je Le Jure" from Quebec.

Hope to run into to you in the second half of the fest Michael!

Thanks for stopping by, Bob! I certainly hope you enjoy this film as much as I did.

I'm sorry we haven't run into each other at TIFF. Hopefully I'll run into you in the final stretch here.