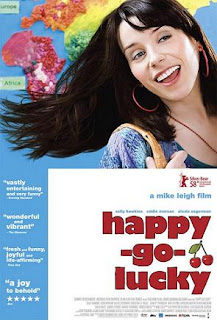 There are many things I learned from Joseph Campbell as a young man, not the least of which was his understanding of compassion as "a joyful participation in the sorrows of the world." Rarely has such joyous sentience been expressed cinematically as in Sally Hawkin's remarkable performance as "Poppy" in Mike Leigh's duefully celebrated Happy-Go-Lucky. If watching films can be thought of as moments of lived experience, then watching Happy-Go-Lucky is a truly positive experience. I loved this movie's life-affirming, anti-miserabilist stance, veined throughout with heartfelt compassion. How wonderful to know great cinema can make you leave a theater smiling and feeling better off than when you went in.

Mike Leigh was a guest of the 51st San Francisco International Film Festival earlier this year where he was the recipient of the 2008 Directors Award. In his introduction, Graham Leggat recalled that Leigh had remarked during an interview, "It's entirely possible for a filmmaker to go around and listen to the world and sense the world and savor the world and experience the joy and pain of the world and express it in a completely pure, honest, interesting and very cinematic way." Noting that Leigh was specifically citing such works as Satyajit Ray's Pather Panchali (1955) and Luis Buñuel's Los Olvidados (1950), Leggat qualified that these films—not unlike Leigh's own—were shot "not with magical realism but the magic of realism."

Evident in every shot of Mike Leigh's films, Leggat emphasized, is his conviction that the world in its unvarnished, concrete reality is endlessly fascinating. "He makes films—unlike many of the films we see in mainstream cinema—about ordinary people and he deals with real things in an unsentimental, completely non-sensational way. As a result, his films have a startling richness." Undoubtedly, this is part of what draws audiences to Leigh's films; what one critic has called "the combination of a ruthless eye working in concert with an expansive heart. A rare mixture of biting satire and humanism."

For a critical overview, check out Patrick Z. McGavin's dispatch to Stop Smiling from this year's Berlinale where the Silver Bear for Best Actress went to Sally Hawkins; also Kaleem Aftab's profile of Leigh for The Independent; Mark Brown's profile for The Guardian; Boyd van Hoeij for Europeanfilms.net; Richard Porton's review for Cinema Scope; Ray Pride's linkage at Movie City Indie; Kevin Buist's Spoutblog interview with Leigh from its Telluride screening, where Ryland Walker Knight also reviewed the film for Vinyl Is Heavy; The Greencine Daily's most recent coverage from the Toronto International Film Festival and the New York Film Festival; their earlier coverage when Happy-Go-Lucky opened in the UK; and Karen Durbin's Fall preview for The New York Times.

Why secretly? Do you hold stock in being a cranky curmudgeon? 8^)