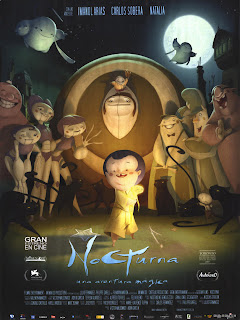 Contrary to what you might think, it was not Twitch teammate Todd Brown's thorough synopsis of Nocturna that encouraged me to watch the film; but, the respected advice of Todd's guest audio reviewer (and young son), Willy. When it comes to kids movies, you gotta trust kids!

Premiering out of competition in the Venice Nights sidebar at the 2007 Venice International Film Festival, with an international premiere in the Sprockets Family Zone at the 2007 Toronto International Film Festival, Adrià Garcia and Victor Maldonado's debut animated feature "pitches the seductive idea that there exists an entire working universe dedicated to actively manufacturing the effects of the night" (Ronnie Scheib, Variety). Ray Bennett at The Hollywood Reporter described Nocturna as "handsomely drawn telling a charming tale of an orphan who learns why he shouldn't be scared of the dark." Both critics appreciated the film's hand-drawn animation to counter the numbing ubiquity of computer-generated 3D animation. In tandem with their opinion, Brendan Willis at Exclaim! adds: "Nocturna's simple, straightforward storytelling has a classic Alice In Wonderland feel, not relying on pop culture in-jokes, musical segments or flashy visual tricks to keep the audience's attention." 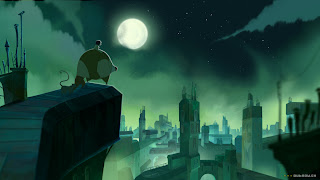 Though comparisons have been drawn to Tim Burton, Lane Smith, and Hayao Miyazaki, I can honestly say that Nocturna has its own unique look and is precisely charming for its originality. Animators Victor Maldonado and Adrià García have succeeded in creating a compellingly poetic new universe that pivots around the ancient belief that each individual's soul is mirrored by a star in the sky. At europeanfilms.net, Boyd van Hoeij interviews "the boys."