"Mama's putting on some war paint for a little bit of combat / You ask the reason / You gotta fight for your freedom / sometimes every day / in every way..."—Laura Nyro. 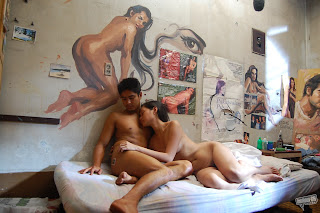 Brillante Mendoza's Serbis (Service) joins the dilapidated narratives of Tsai Ming-liang's Goodbye, Dragon Inn and Jacques Nolot's La Chatte à deux têtes (Porn Theatre), wherein the architecture of better days succumbs to poverty's desperate (and sometimes comic) immoralities and perversities. It's a labyrinthine sojourn that serves as an allegorical deconstruction of contemporary Philippines where the family unit is tentatively held together by strong women and constantly threatened by weak men. Three generations of women preen in front of mirrors, applying lipstick, hoping to use wiles to inspire if not govern their men who—despite the best feminine intentions—squander away the family’s resources leading the theatre to ruin. 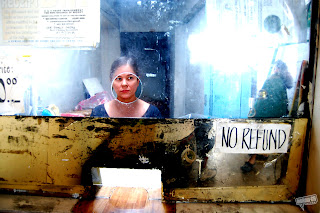 The Pineda family operate a run-down movie house—ironically named The Family, no less—which shows daily sexy double-feature films. While they endure each other's sins and vices, the matriarch, Nanay Flor, receives a long-awaited court decision on the bigamy case filed against her estranged husband. Though not entirely successful in its imitative critique, Serbis does an adequate job of showing that sex sells everything even if real sex is not quite as sexy as cinematic sex. When push comes to shove, however, it's the antics in the darkened theater of Serbis that burn up the screen (registered in a literal coda). My favorite scene: a goat runs loose in the theatre aisles, mocking the saturnalia. 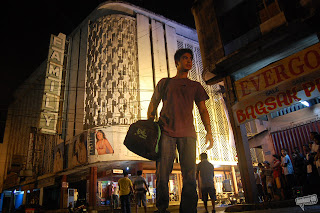 Movie Jungle offers an expanded (spoilerish!) synopsis. At The Greencine Daily, Dave Hudson gathers the critical response from Cannes08. At The New York Times, A.O. Scott is equally enamored with the film's strategic use of a goat to describe "the metaphorical goats, as it were, [that] can be found in the screening rooms, where audiences gather, sheeplike, to witness the frustration, misery and disorder of real life in various parts of the world." At The Hollywood Reporter, Kirk Honeycutt complains the film is "a headscratcher" and judgmentally suspects the film was at Cannes "for one reason—to give the festival its annual jolt of graphic oral sex." (This is a bad thing?) At Macleans.CA, Brian D. Johnson deduces that "[t]he blow job is the new French kiss" and judges Serbis as "a shabby piece of video verite from the Philippines." At Lessons From the School of Inattention, Francis Cruz admits that Serbis is "hardly a perfect film" but is "undoubtedly fascinated" by the film's narrative complexity ("[t]he storyline is as complicated as the labyrinthine corridors of the theater") and appreciative of the film's intended aim of "mixing reality and fiction and blurring the fine line between film viewing and voyeurism." At Film Comment, Richard Peña overlooks the faults of the film's low production value to enjoy its "engaging anarchic energy" and how it "moves at breakneck speed and turns on a dime." Peña doesn't judge the film's erotics as much as others. In fact, he says: "The sex on the porn theater's screen begins to feel like an oasis of calm amid the hothouse atmosphere that envelops the film."

Serbis, which was the first Filipino film to play in Competition in Cannes in 24 years, has had its North American rights picked up from Fortissimo Films by Regent Releasing.