This last Saturday on my way to enjoy African cinema at the Mill Valley Film Festival, I picked up a copy of the San Francisco Bay Guardian at the newsstand and came across a brief mention of a Maria Montez triplebill at the Castro Theatre—Ali Baba & the 40 Thieves, The Cobra Woman, and Arabian Nights—scheduled for the following day. Suddenly, I experienced a true cinephilic dilemma: would I be "serious" and attend the sampling of New Romanian cinema at Mill Valley the following day, for which I'd already secured press passes? Or would I opt out and pay for triple slam camp?

What can I tell you? There I was, one of the first in line, to hunker down for afternoon matinees of three prime vehicles of The Queen of Technicolor. Do I regret my decision? Not in the slightest. Watching Ali Baba & The 40 Thieves, The Cobra Woman and Arabian Nights in sequence proved to be not only relaxed fun but a heady exercise in spectatorial relativity. Let me try to explain what I mean by that. I'll start with Cobra Woman, which I'd seen once before when Kenneth Anger admitted to playing hookey from high school to catch it at his local theater. 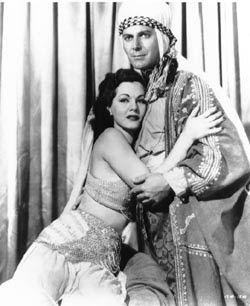 It's always fascinating to me what shifts into the realm of camp and what can be "read" by new audiences into old cinematic texts. For me this is a determinant of the shelf life of any film; precisely how it can be recontextualized to suit contemporary appetites. I know there are some who believe films should be left alone and appreciated on their originally-intended merits; I just don't think that's going to happen. It is the nature of film to be malleable. The last time I saw Cobra Woman, no one laughed when the Queen pronounced, "Fear has made them religious fanatics!" This time it got a good huzzah, indicating (I guess) that we've learned something about fear and religious fanaticism in recent years, and are ripe for a jest about it; truth, after all, often being said in jest. 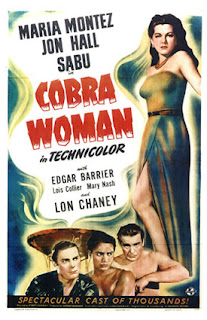 For any self-respecting gay man, it's almost requisite after watching Cobra Woman that you turn to the friend beside you and demand, "Give me that cobra jewel!" [pronounced "Geef me that Coparah chewel!"]. It actually made me laugh to hear it repeated throughout the Castro audience as if a flock of tropical parrots had perched on the Castro's seatbacks. Some lines are just so fun, I guess, they make us happy to repeat them. This also has something to do, I suspect, with what Gayatri Gopinath in her pioneering study of queer diasporas in South Asian public cultures—Impossible Desires—identifies as the fantasy space wherein queer spectators can contest and resist heteronormative hegemonies. It is in fantastic and exaggerated scenarios that queers can frequently imagine and insert themselves as being or belonging. That's not to say that anyone who feels a little different growing up can't access fantastic scenarios, but for many young queers the access becomes necessarily restricted to these imaginary realms when, conversely, the reality of their very being is questioned, denied and rendered invisible or, worse yet, non-existent. If you can't be the sentence on the page; then you must discover yourself in the margin. If you can't be like the other little boys on your block; then you must see yourself in another world of fantastic creatures engaged in tremendous adventures. A towel wrapped around the head will turn you into Ali Baba, Sinbad, Aladdin. At least, that's what happened to me when I wrapped a towel around my head. 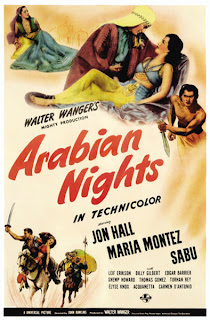 The association of Maria Montez with queerdom is well documented, especially with regard to Jack Smith's adoration and iconic reclamation of her. And for myself, aware of Smith's adulation, and aware of Smith's key role in the development of experimental cinema in the U.S., it is impossible for me to watch these Technicolor fantasies without factoring Smith into the viewing equation and to contemplate the seminal role of queer resistance in the development of the American avante-garde.

Gary Morris writes for Bright Lights Film Journal: "Smith was raised on Hollywood kitsch, and … his patron saint Maria Montez—to whom he built an altar and prayed—inspired him. Always a good talker, he insisted on Montez's importance as an actress to all who would listen (and there were many). He called her 'the Holy One' and 'the Miraculous One.' After a screening of one of her films, he told a friend, 'The Miraculous One was raging and flaming. Those are the standards for art.'

"Smith's own standards for art let him refashion Montez and the whole ethos of tinny Orientalia, low-budget intrigues, and what he called Universal's 'cowhide thongs and cardboard sets' into Dionysian revels that were both wild camp and subtle polemic in upsetting an overflowing apple cart of norms: heterosexuality, narrative, social and sexual and aesthetic repressions." 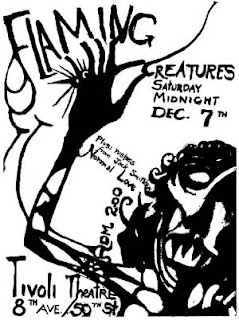 Senses of Cinema contributor Constantine Verevis writes: "According to writer Ronald Tavel, Smith, while working as an usher at Chicago's Orpheum Theater in 1951, was introduced to the films of Maria Montez when news of her untimely death inspired a retrospective: 'It was then and there [that Smith] became familiar with the star whom he has since referred to as The Wonderful One or The Marvelous One. He felt that all the secrets of the cinema lay in careful study of [that] woman.' Montez embodied for Smith the 'magic' of the movies and his film and later theatre work is filled with references to specific Montez pictures, and to Hollywood exotica more generally." 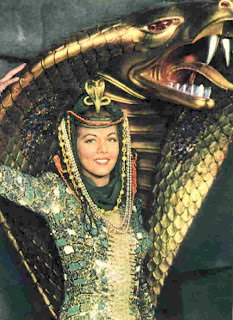 Smith elevated Montez in his aesthetic manifesto "The Perfect Filmic Appositeness of Maria Montez", published in Film Culture 27 (Winter 1962–63): 28–36. When Mary Jordan's recent documentary Jack Smith and the Destruction of Atlantis was screened at New York's Film Forum, Karen Cooper asserted: "If there is a heaven for the wonderfully bizarre, Jack Smith resides there, accompanied by his patron saint, Maria Montez."

So what was it exactly about Maria Montez that created such an aesthetic arrest in Jack Smith? Clearly, as Wikipedia enunciates, "Her Latin beauty soon made her the centerpiece of Universal's Technicolor costume adventures, notably the six in which she was teamed with Jon Hall—Arabian Nights (1942), White Savage (1943), Ali Baba and the 40 Thieves (1944), Cobra Woman (1944), Gypsy Wildcat (1944), and Sudan (1945)." Wikipedia further specifies that Arabian Nights—the first in this series of exotic tales released by Universal during the war years—"bears the distinction of being the first film by Universal to use the 3 strip Technicolor film process." 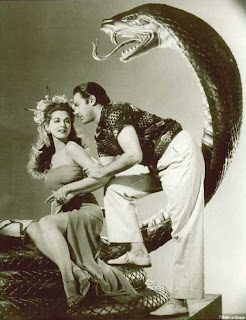 Was it that when she looked at herself, Montez declared: "I am so beautiful I scream with joy"? It couldn't have been her acting. In fact, after Arabian Nights I smiled to myself when I overheard one guy say to his companion, "She almost acted in that one!" But—if not her acting—it might have been her ability to make believe. In Smith's own assessment of Montez, he wrote: "At least in America a Maria Montez could believe she was the Cobra Woman, the Siren of Atlantis, Scheherezade, etc. She believed and thereby made the people who went to her movies believe." Robert Siodmak, director of Cobra Woman, concurs: "Montez was a great personality and believed completely in her roles—if she was to play a princess you had to treat her like one all through lunch ... method acting before its time, you might say!" And Lucita, Maria's sister, recounts this advice given to her by Maria: "The first thing a young lady should do for being an actress is to believe she is the most beautiful and important of all the women who live on Earth. In other words, behave as if you were a queen. Do not be afraid in front of any of the directors, not even how exigent and ill-tempered they could look to you. Remember, my dear Lucita, it is the public and not them, who has the last word."

Steve Gallagher quotes from Smith's essay "The Perfect Filmic Appositeness of Maria Montez" for his Filmmaker review of Mary Jordan's documentary: "Critics are writers. They like writing—and written characters.... Maria Montez's appeal [on the other hand] was on a purely intuitive level. She was the bane of critics—that person whose effect cannot be known by words, described by words, flaunts words (her image spoke)."

That quality of immersing oneself in make-believe is further characterized by its apparent lack of politicization. Having recently interviewed the talent behind The Kite Runner regarding the painstaking detail with which they re-created Afghanistan before the Russian invasion and the rise of the Taliban, Technicolor's insouciance borders on the negligent, if it weren't so preposterously entertaining. Feigned accents in broken English transform Hollywood actors into Arabs, though Andy Devine doesn't even try in Ali Baba & the 40 Thieves. His colloquial inflections reek of backwater America. The slipshod pretense is charming. 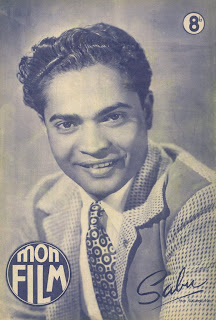 So along with the reclamative project of queer spectatorship, Arabian Nights and Cobra Woman offers the intriguing casting of Sabu through Hollywood's reductive lens of ethnic hierarchy. Sabu Dastagir was a child star allegedly "discovered" in Mysore, India by British producer Alexander Korda in the mid-30s who went on to star in Orientalist vehicles throughout the 1940s and 1950s, first in the UK and then in Hollywood. Though to the generation of his time Sabu might have been seen as "having made it", a symbol of immigrant success, contemporary theorists such as Gayatri Gopinath interpret Sabu as "nothing more than an anachronistic emblem of Orientalist and colonialist fantasies of perpetually childlike, effeminized 'native' men." Watching his lithe, lovely body, there is something very sad about the image of Sabu on the screen. As Gopinath summarizes: "Sabu, we are told, attempted to transform his childhood success in British cinema into adult stardom in Hollywood, only to be plagued by racism within both sites. His career steadily declined in the post-World War II era, and in his penultimate role he was reduced to playing the native 'boy' sidekick—at the age of thirty-eight—opposite Robert Mitchum in the 1963 jungle adventure film Rampage. Sabu thus remains perpetually frozen as the 'wonderful, graceful, frank, intelligent child' who so entranced British film director Michael Powell, who cast him in the lead role in The Thief of Baghdad in 1940." (2005:70)


And finally, as if to counter the folly of all cinematic illusion, a moviegoer must content themselves within the moment of projection, when the movies exist in and of themselves flickering colorfully in the dark, outside of the troubling parameters of the real and ragged lives of their casts. Maria Montez died of drowning in her bath tub after suffering a heart attack. Jon Hall killed himself, unable to bear the pain of encroaching cancer. Sabu—doomed to be forever youthful—died at 39 from a heart attack. Even Vera West—responsible for designing Maria Montez's lustrous gowns for Cobra Woman (let alone the wedding gown of the Bride of Frankenstein)—was found dead in her pool, by suicide, escaping blackmail.

While I NYC, I could easily see Flaming Creatures. For some reason, none of the revival theaters ever seemed to show the Maria Montez films. Considering some of the junk that they have made available, I would hope that Universal puts these films out on DVD soon.

You and me both, Peter. Thanks for stopping by. I know you love genre films. Have you seen these?

I might have seen parts of Ali Baba or Arabian Nights on black and white TV. Cobra Woman has remained elusive, and I am a fan of Robert Siodmak. I just found out there is a French DVD so I may have to spring for that.

Thanks for the comment and for the interesting family history. I imagine you could find some of Maria Montez's films on Amazon.com?