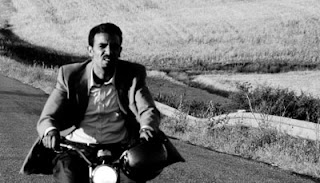 If Lotfi Abdelli's award-winning turn as Bahta in Nouri Bouzid's Making Of wins you over to his promising talent, you might want to check out as well his brief appearance in the U.S. premiere of Lotfi Achour's debut short film Ordure / Garbage (2007), wherein Abdelli plays a butcher who gives his girlfriend "full blows to shut her up and full condoms to make up for it." Abdelli applies the brooding intensity maximized in Making Of to his swift and questionably attractive characterization of the butcher in Garbage. The pitch of his intensity is reminiscent of early DeNiro in Taxi Driver or Edward Norton in American X. Abdelli's got the chops, the looks, the conflicted sensuality, and a long future to hone it perfect.

The lead actor in Achour's short slice of life, however, is Nôomane Hamda as Mounir, a night watchman who becomes comforted in his life of isolation and loneliness by the strange passion he cultivates for rubbish left behind by his neighbor Latifa, with whom he is secretly in love. Mounir takes possession of Latifa's garbage and becomes the secret witness of her life, which is anything but dull. This raises the ugly head of what I discussed with Cartoneros director Ernesto Livon-Grosman: just how private is our garbage anyways?