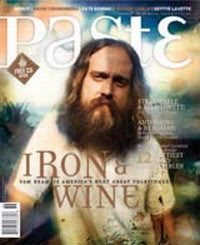 Though flung off a hyphenated abyss on page 63 only to land face front on page 64, Rob Davis's essay “Bending Light & Baring the Soul” in the current issue of Paste (No. 36, 10/07) is an essential grasp on the cinephilic loss of Michelangelo Antonioni and Ingmar Bergman earlier this Summer.

Burnishing his insights on the films of Antonioni, Rob explains that he was a director for whom “existence is an indistinct concept.” “Again and again,” Rob writes, “Antonioni hid his plot in shadows but pulled the questions into the light.”

As for Ingmar? Rob concludes that Bergman “didn’t seem to have any answers to the questions he raised … but he kept asking them, and had a knack for bringing his stories to an appropriately dramatic conclusion without cauterizing all of his characters’ wounds. He was a smooth, precise director, but one who—unlike Antonioni—worked within the conventions of film grammar rather than pressing at the medium’s edges.”

Myself, I am reminded that no less than a month before Antonioni’s demise, Darren Hughes and I—on our way to a film at the San Francisco International—were tickled by a couple in a tennis court volleying with imaginary rackets.

Life is only so much cinematic citation after all.

Wow, my own post? I have arrived. Thanks so much, Michael. Yeah, I've received a few emails about the error, so I've posted a correction here.

[Sorry if this is a duplicate post. Blogger's moderation feature is confusing. It's never clear if the comment went through.]

You arrived AGES ago, Rob; I'm just catching up. Thank you very much for the errata. I can't tell you how many times I flipped those pages thinking there was some kind of trick. Maybe the missing text was in the margins? Maybe it was placed within an ad? Maybe it was inserted into another paragraph? Airport terminals are not the best place to be confused.