LANA TURNER—A Life of Her Own 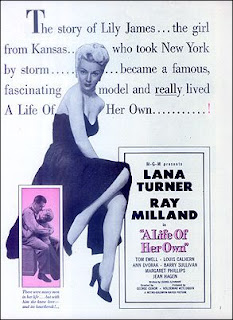 You know how it is. I'm supposed to be covering the Arab Film Festival, or at least wrapping up my coverage of the Idaho International and the Mill Valley Film Festival. I'm supposed to be reading and reviewing a handful of books sent to me by various publishers on a half dozen film topics. I'm supposed to be hacking through the screeners stacked on my coffee table, which are at this juncture vertiginously leaning over the edge. Instead, I plop myself down in front of Turner Classic Movies and catch a morning broadcast of George Cukor's A Life Of Her Own (1950), thoroughly enjoying it along with my morning cup of Joe because—well—I'm not supposed to. A sure case of using a movie to get away from the movies. Been there? 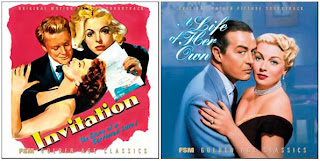 Yes, A Life Of Her Own is a two-star meller with Lana Turner in the starring role playing a successful top model engaged in an adulterous affair with an anguished married man; but, the real star is Bronislau Kaper's haunting signature tune nominated for a Golden Globe for best original score. Apparently, when A Life Of Her Own didn't do too well at the box office, said melody was recycled two years later in Invitation (1952) so it wouldn't completely go to waste. 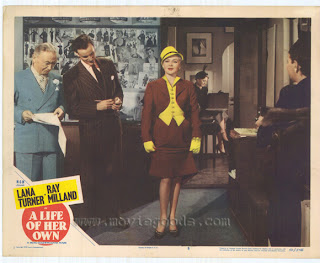 Hal Erickson synopsizes for All Movie Guide: "Lana Turner stars as an ambitious model who seeks her fortune in New York City. She is befriended by over-the-hill cover-girl Ann Dvorak, whose performance carries the story until she commits suicide twenty minutes into the film. Turner promises herself that she won't end up burned out like Dvorak, but as her fame grows, she is inexorably drawn into the hectic social whirl that sealed Dvorak's doom. Enjoying the favors of wealthy Ray Milland, Turner seeks out Milland's wife (Margaret Phillips), hoping to convince the woman to give up her husband. When she meets the crippled Mrs. Milland, Turner is made painfully aware of the length and breadth of the woman's love for her husband. Turner pulls out of the relationship, and we are encouraged to believe that hers will be a much happier and more fulfilling life than that of the unfortunate Ann Dvorak (ironically, in real life Ann Dvorak's final days were relatively contented ones, while Lana Turner spent her twilight years wondering where the looks, the men and the money had gone). Though not so noted in the credits, A Life of Her Own was inspired by The Abiding Vision, a novel by Rebecca West."

The reviews in 1950 were mixed. Variety excused the soap opera plotting as "polished to considerable extent" with "topnotch" performances by the femme cast under Cukor's able direction. They determined Lana Turner's performance was "a decided asset." 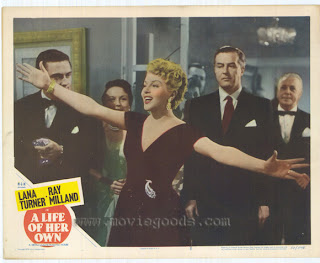 Bosley Crowther at the New York Times begged to differ, stating flatly, "Two years' absence from the movies obviously did not improve Lana Turner's talents as an actress or her studio's regard for what she can do." Turner's performance, Crowther explained, suffered for being "plainly self-conscious of her hair-do, her clothing, her billing and her bust." As for Lana's leading man Ray Milland, his "perpetual air of discomfort" indicated that "he had read the script." But among the shreds of the film left beside Crowther's desk, what most caught my attention in his review was the comment: "Somehow, while watching this picture, with its cliches, its lush inanities and its vacuum-sealed preoccupation with the two-bit emotions of one dame, it was difficult for this reviewer to believe that such a film had been made in this year, 1950, and with the world in the state that it is. Pictures like this were the fashion fifteen years ago, when the screen and its candy-munching audience were in a much more infantile stage." 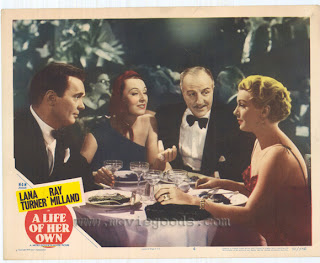 In all fairness to time and other vagaries, it's precisely because of the world and the state it's in that A Life Of Her Own now proves to be disarming entertainment, distracting me from local responsibilities and global concerns with clever lines like "Talk to a lawyer and all you get is conversation" and "They ought to invent a new kind of ambition; one that doesn't wear out."

On a personal aside, I have to likewise express feeling heartened somewhat by the fact that 50-year-old film reviews still serve to amuse. I can only hope the same for the pros and cons here at The Evening Class.
Posted by Michael Guillen at 10/18/2007 04:12:00 PM