THE PLAYBOY INTERVIEWS: THE DIRECTORS 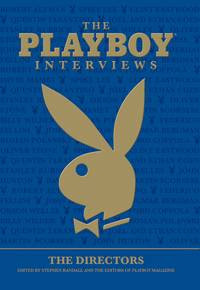 Stephen Randall, the Deputy Editor at Playboy magazine and editor of Playboy's monthly Interviews, has applied his editorial talents to compiling The Playboy Interviews: The Directors, published by MPress. He has selected 17 subjects who best represent a window into the creative minds of some of cinema's true artists—alphabetically, Robert Altman, Ingmar Bergman, Joel and Ethan Coen, Francis Ford Coppola, Clint Eastwood, Federico Fellini, John Huston, Stanley Kubrick, Spike Lee, David Mamet, Roman Polanski, Martin Scorsese, Oliver Stone, Quentin Tarantino, Orson Welles and Billy Wilder—spanning nearly 40 years from the June 1963 interview with Billy Wilder to the November 2001 interview with the Coen Brothers. Eastwood and Stone are each interviewed twice, decades apart, to provide a fuller grasp of the span of their careers.

Publishers Weekly has stated "the lengthy, unpredictable interviews prove compelling throughout" and add that "Since the interviews have no length restriction, interviewers are able to probe deep into their subjects and allow them to ramble expansively. While some of the material is dated, most of the interviews were conducted during particularly fertile periods for their subjects, resulting in a detailed snapshot of where these directors were at pivotal career moments."

Booklist cautions that "Serious cineastes may be disappointed that the pieces offer less on individual movies than on filmmaking in general and personality-driven anecdotes. Their digressions, however, often fascinate…."

As the book's liner notes lay out: "Movies are today's lingua franca, speaking to us on an emotional and intellectual level that no other art form can match. While there have been many great films, only a few directors have raised the motion picture to its highest level. In The Playboy Interviews: The Directors, 17 of the world's most widely respected and creative filmmakers discuss with the writers of Playboy what drives and inspires their craft."

In his introduction to the collection Stephen Randall relates that "Hugh Hefner has said that his view of the world was forged in the darkened theaters of his youth." Hefner's editorial approach towards the interviews in his magazine, however, came about in 1962, when Playboy was a mere eight years old. As the liner notes detail: "Hugh Hefner was shown a partial manuscript by a young writer named Alex Haley. The manuscript was actually a transcript of an interview Haley had done with Miles Davis. Hefner was struck by two things: Davis's fiery intelligence, and the fact that the transcript didn't focus strictly on music, but gave Davis a chance to share his views on race, government and society. Hefner dispatched Haley to continue interviewing Davis, and ran the edited transcript as the first Playboy Interview."

Along with Playboy's centerfold pleasures, reading these interviews as a young boy admittedly had much to do with how I approach my subjects today, striving not only for in-depth appreciation of their current projects, but situating them within the political and socio-cultural climate of our times. "Directors often talk to the media to promote their films," Randall stresses in his introduction, "but rarely do they get the opportunity to speak about other aspects of their lives, including the forces and events that have shaped their vision."

I look forward to exploring this volume to see not only how these gifted directors think and work, but how the structure of the interviews themselves might hone my own interviewing technique here on The Evening Class. Anticipate running commentary on this volume of work in the months to come and if any of my readers are familiar with these specific interviews, please speak up.