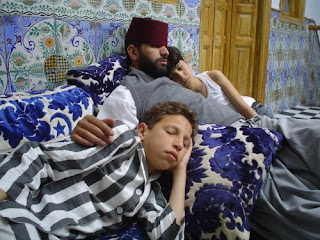 The Arab Film Festival boasted the U.S. premiere of Moroccan filmmaker Moumen Smihi's latest film El Ayel/La Gosse de Tanger (A Muslim Childhood). As Peter Limbrick wrote for the festival catalog: "Moumen Smihi's career as a director spans more than thirty years, making him one of the most eminent figures in Moroccan cinema. In A Muslim Childhood, Smihi creates a sumptuous mise-en-scene of Tangiers in the 1950s, where a young boy, Larbi, tries to find his place in the collision of cultures and influences he experiences around him. Under the sway of his strict Muslim father, modern mother, and French high school, the solitary and timid Larbi finds escape from his personal traumas in the International Zone of Tangiers, where cinema and decadence beckon and offer him another kind of world. Smihi's film is saturated throughout with a color palette of Mediterranean blue that helps the film achieve the mixture of Proustian nostalgia and Dickensian fictional style that Smihi consciously sought. In an arresting and contemplative style, in which voiceover often accompanies shots resembling tableaux vivants, Smihi attempts to recreate the singularity of a time, place, and cultural identity for his viewer. In so doing, this stunning film, part fiction and part autobiography, declares its love for cinema while at the same time rendering for its viewers the rich cultural, ethnic, and linguistic diversity of life in 1950s Morocco."

Moumen and I wanted to get together to discuss A Muslim Childhood, but our schedules were at odds with each other and we, unfortunately, missed during his visit. Until we can achieve same by email, Moumen has forwarded me some of his thoughts while visiting San Francisco, especially with regard to the influence the San Franciscan Beat poets had on his own work. Moumen acknowledges Joe Garofoli from the San Francisco Chronicle for "triggering" these remembrances. I, in turn, am most grateful for his permission to share them with The Evening Class.

Howl
Ginsberg censored in the States when he was acclaimed in the heart of the Arab-Muslim world! What a terrible contradiction! In the fifties, Allen Ginsberg was one of the brilliant representatives of the American literature that haunted my town in North-Africa, Tangier. Gregory Corso, Tennessee Williams, Truman Capote, Paul Bowles, Jack Kerouac, William Burroughs were the other U.S. literature giants that time to time visited Morocco or were living and working there. Their books were exposed in the bookshops (as in one called "Librairie des Colonnes" in Tangier) and libraries (the one of "The American School" for instance in the same Tangier) and Moroccans as well as all the readers of many countries of the world were diving with the biggest admiration into The Naked Lunch, On The Road or A Streetcar Named Desire. Drugs, homosexuality, communism (we heard proudly that Paul Bowles had once been a member of the American Communist Party) ... nothing of these scandalous and repressed themes could interfere or mix the pleasure of meeting this immense literature of liberation, of deep humanism in its conterculture entity. My generation of Arabs coming out of the colonialism period was so excited to find in these books and minds what [could] enhance their thirst of anti-conformism and liberty. Then, America and her writers and intellectuals were a model, an ideal, the hope of our future. When—as a young man—I was watching members of the Beat Generation at the cafes all around the little square called Socco Chico in Tangier, or listening to lectures of poems and texts in Paul Bowles place at Chemin des amoureux Street, I never could imagine that censorship was acting in their prestigious country. In fact I must say that I was a dreaming boy ... but nevertheless a kind of a coquelicot, a savage grass breathing in cosmopolitan marginalism. And that is what I filmed many many years later in A Muslim Childhood, a feature about the fifties in Tangier.

Hussein
The Egyptian writer Taha Hussein in modern Arab culture is the symbol of a similar rebellion against orthodoxy and fundamentalism, and his influence in literature, in religion's history, in education changed the face of the Arab World and will change it more and more: he was a dominant figure in Tangier by his books: one of his masterpieces, Wednesday's Lectures, was born in The American University in Cairo in the fifties.

Hitch
Alfred Hitchcock is not as much the master of thrillers as of the anti-conformist feelings and psychology, his films being always in the tradition of the Surrealist's "mad love" (l'amour fou); in cinema: Luis Buñuel (Un Chien Andalou, L'Âge d'Or, That Obscure Object of Desire). Vertigo: San Francisco: up-down, left-right: how to fight against phobia: against the "repressed" in psychoanalytical meaning.