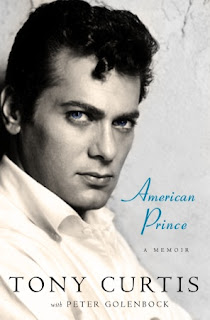 Tony Curtis is getting good mileage out of his memoir American Prince, co-authored by Peter Golenbock and published this month by Crown Publishing, a division of Random House. Featured as the October selection at Turner Classic Movies' Book Corner; I've not yet received my copy but have enjoyed a hefty excerpt published in the November 2008 issue of Vanity Fair. That excerpt primarily concerns itself with Curtis's brief but sweet love affair with Marilyn Monroe and their reunion on the set of Some Like It Hot, and follows Sam Kashner's revelatory Vanity Fair article on Monroe published last month. 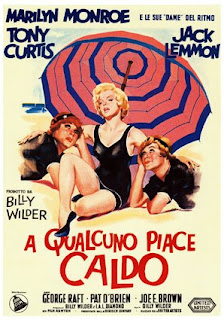 Billy Wilder's 1958 comic masterpiece of gender shenanigans screened at the Pacific Film Archive as part of their Spring 2007 "A Thousand Decisions in the Dark" program, hosted by David Thompson. Thompson offered considerable insight into Some Like It Hot, both through a pre-film lecture and a post-film Q&A. Monroe's difficulty on the set, Wilder's masterful handling of her, and the shimmering sultry results on screen are all part of Hollywood legend. As Curtis recollects: "[T]he problem was that she wanted to control every single man she met. Depending on the man, it was either 'I love him' or 'I hate him.' But she was incapable of not paying attention to a man. She felt she had to play to every one." The on-set tension was heightened by the presence of Paula Strasberg, wife of Lee Strasberg, founders of the Actors Studio and "the method." "Marilyn wanted to be an intellectual, and they played to that desire, which made her very dependent on them. She had completely succumbed to the Studio philosophy that it's good to mumble your words—what I called the Marlon Brando style of acting. The problem was that only Marlon could do it. I came to hate the Actors Studio for what it did to Marilyn. Lee Strasberg was certainly a great acting coach. In my opinion, the problems came from Lee's wife. Paula's presence made things hard for Marilyn, because she felt torn between Paula and Billy. Marilyn played the ding-dong for Paula, and she played the diva with Billy, giving both of them what she thought they wanted, because that was how Marilyn was wired." Curtis finally sets the record straight regarding the well-trafficked quote that kissing Marilyn Monroe was like kissing Hitler: "After the scene on the yacht, some of the crew and I stood around to watch the rushes, and afterwards they wanted to know what it was like to kiss her. I figured a question that stupid deserved a stupid answer, so I flippantly responded by saying, 'Kissing Marilyn is like kissing Hitler.' I was right—it was a stupid answer. What I should have said was 'What do you think kissing her is like, birdbrain?' Or I could have had the good sense to just say nothing. But my thoughtless comment became public knowledge, and the story still makes the rounds. So let me set the record straight once and for all: I hated Hitler. As a Jewish kid in New York, I threw condom bombs on pro-Nazi parades. I loved Marilyn Monroe. And she was a terrific kisser." 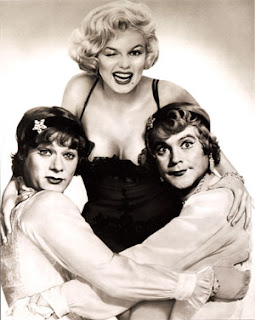 More revelations on Marilyn Monroe are bound to ensue when Some Like It Hot returns to the Castro Theatre in a tribute screening to Tony Curtis on Tuesday, November 18, 7:00PM. This event, a premiere partnership by impresario Marc Huestis and the Mill Valley Film Festival—who are awarding Curtis a lifetime achievement award—will include a career highlight clip reel and an onstage interview with KRON personality Jan Wahl. Tickets are $35 Orchestra, $25 Balcony, and are available by calling (415) 863-0611 or on-line at the Mill Valley Film Festival website. Copies of the Curtis memoir will be available at the event and Curtis will be signing same after the gala. 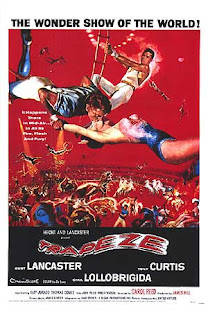 This tribute event will be anticipated by a mini-retrospective of films featuring Tony Curtis. I'm especially excited to finally catch Trapeze (1956)—one of my favorite Curtis vehicles—on the Castro Theatre's giant screen. Trapeze co-stars Burt Lancaster and Gina Lollabrigida and will be on a double-bill with Sweet Smell of Success (1957) on Saturday, November 8. Spartacus (1960) screens Sunday, November 9. The Boston Strangler (1968) and The Defiant Ones (1958) will screen Tuesday, November 11, and the Wednesday, November 12 program has yet to be locked into place but will be a doublebill comprised from the following titles: Operation Petticoat (1959), Sextette (1978), Houdini (1953) or The Great Impostor (1961). 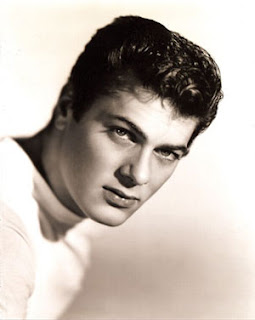 Huestis has adapted Curtis's Wikipedia bio: Few actors alive have earned the title of Hollywood legend and American Prince—Tony Curtis is one. Born Bernard Schwartz on June 3, 1925, Tony Curtis was the son of an impoverished Hungarian-born tailor. He grew up in the mean streets of the Bronx—where he was a member of an infamous area street gang at the age of 11. During World War II, Curtis served in the navy, battling in Guam and witnessing the surrender of the Japanese in Tokyo.

After the war, he returned to New York to pursue a career in acting, where he studied alongside Elaine Stritch, Walter Matthau, and Rod Steiger. At a Greenwich Village revival of Golden Boy, Curtis came to the attention of Universal, who signed him to a seven-year contract. In 1949, he made his film debut, unbilled, in the classic Robert Siodmak noir Criss Cross dancing a smoldering rumba with Yvonne deCarlo. He slowly made his way up through the studio's ranks, earning top billing in 1951's The Prince Who Was a Thief, co-starring another up-and-comer, Piper Laurie. During this period, he was slowly building an onscreen persona that was part charming rogue and part earnest, sensitive hunk. In 1953, Paramount borrowed Curtis to portray Houdini, which cast him opposite his wife, Janet Leigh. Their marriage (1951-62) made him a favorite of fan magazines and gossip columns.

In 1956, United Artists borrowed him for the Burt Lancaster vehicle Trapeze; not only was it Curtis' first serious project, but it was also his first true commercial smash. Lancaster tapped him to co-star in 1957's The Sweet Smell of Success, and the resulting performance won Curtis the best reviews of his career to date and a BAFTA award for Best Foreign Actor by the British Academy of Film and Television Arts. Similar kudos followed for The Vikings (1958), co-starring Kirk Douglas, and Kings Go Forth (1958), a war story with Frank Sinatra. 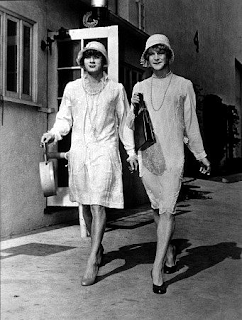 Also in 1958, Curtis and Sidney Poitier starred in Stanley Kramer's social drama The Defiant Ones as a pair of escaped convicts manacled together. Their performances earned both men Academy Award nominations (the only such nod of Curtis' career). He then made one of the best films of his career—Billy Wilder's classic Some Like It Hot, which cast him and Jack Lemmon as struggling musicians forced to dress in drag to flee the mob—both in love with sex bomb Marilyn Monroe. In it he does a spot-on interpretation of Cary Grant, and in his next picture Operation Petticoat he got to play opposite his idol.

For director Stanley Kubrick, Curtis co-starred in the 1960 epic Spartacus, in which he had the famous "snails vs. oysters" scene opposite Laurence Olivier. A year later he was The Great Impostor and delivered a strong performance in 1961's The Outsider. Curtis made a brief appearance in John Huston's acclaimed The List of Adrian Messenger (1963) before appearing opposite Gregory Peck in Captain Newman, M.D. (1963). 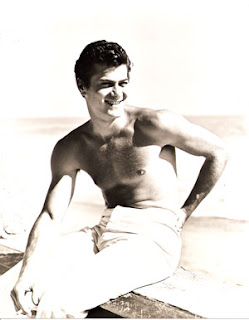 With second wife Christine Kauffman, he starred in 1964's Wild and Wonderful, which was reported to be his last film for Universal. After appearing in a number of comedies—including Vincente Minnelli's Goodbye Charlie (1964) co-starring Debbie Reynolds, the big-budget The Great Race (1965), and, with Jerry Lewis, Boeing Boeing (1965)—the basis of the current hit Broadway revival—he battled long and hard to win the against-type title role in 1968's The Boston Strangler, which brought Curtis another Golden Globe nomination for his portrayal of suspected serial killer Albert De Salvo.

From the 70's through the present, he has appeared in numerous films—notably Elia Kazan's all star drama The Last Tycoon (1976), and Mae West's infamous Sextette (1978); participated in acclaimed documentaries including Rob Epstein and Jeffrey Friedman's locally produced The Celluloid Closet (1995): toured with the musical Sugar—based on Some Like it Hot—and was a regular on many television shows including the 1971 cult favorite The Persuaders with Roger Moore, Suddenly Susan with Brooke Shields and Kathy Griffin and the classic 80's sit-com Roseanne. 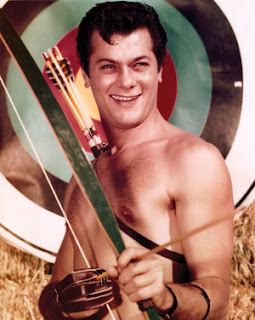 Tony Curtis has fathered six children including the acclaimed actress Jamie Lee Curtis (with Janet Leigh), and is currently married to Jill Vanden Berg. The couple live in Henderson, Nevada, where they are actively involved with the Shiloh Horse Rescue and Santuary.

Since the early 1980s, Curtis has painted as a second career. "I still make movies but I'm not that interested in them any more. But I paint all the time." In late 2005, the Museum of Modern Art accepted one of his paintings, and in 2007, his painting "The Red Table" was on display in the Metropolitan Museum in Manhattan.

There is a mural of Curtis on US Highway 101 Southbound at the Sunset Blvd. exit, he has a star on the Hollywood Walk of Fame, and received the Ordre des Arts et des Lettres (Order of Arts and Letters) from France in 1995. In 1998, he founded the Emanuel Foundation for Hungarian Culture, and has served as honorary chairperson. This is for the restoration and preservation of synagogues and 1300 Jewish cemeteries in Hungary. He dedicated this to the 600000 Hungarian victims of the Holocaust.

I just finished the book and there is a bit of a bad taste in my mouth about all the women he used. His double standards and self abusive behaviors seemed like he had very little conscious. His lack of family involvement is one of his regrets, an understatement.

There is great inconsistency in this memoir--at times it reveals
important info out of order and
at other times it is repetitious.
Curtis is does take a harsh look
at some of his actions, but not as
often as he excuses his mistakes as being done with discretion and
no intention of harming any of his
wives...jeez!

who cares what he wrote, he was GORGEOUS, what a beautiful man...

not only he was a hunk, beauiful man, but when i see him being interview nowadays he seems like a charming nice man and funny... but how gorgeous he was, right?

I met him at an autograph session when he was in Paris a few years ago for the screening of the documentary "The Jill & Tony Curtis Story", about their horse rescue mission. He was charming, his voice is the same.