Legalized cat-shooting, The Price is Right, competitive balloon-twisting and Bigfoot—these are only a few of the subjects you'll find explored at this year's San Francisco International Documentary Festival ("DocFest"). Last year's event was such a phenomenal success (over 5,000 tickets sold), they've expanded this year's edition from two weeks to three—a fortnight's run at the Roxie Theater (Oct. 17-30) followed by a one-week debut engagement at the Shattuck Cinemas in Berkeley (Oct. 30-Nov. 6). Now in its seventh year, DocFest 2008 will spotlight over 60 non-fiction films from around the world, encompassing a tremendous range of interests and issues.

I've had the chance to preview three of this year's selections, including co-opening nighter Chelsea on the Rocks directed by Abel Ferrara (The Bad Lieutenant, The Addiction). The titular Chelsea is the infamous New York City hotel that's been home to a century's worth of masterminds and miscreants from the world of arts and letters. We're talking everyone from Mark Twain to Édith Piaf to Sid Vicious. And now the joint's on the rocks because it's being converted into a highfalutin boutique hotel. 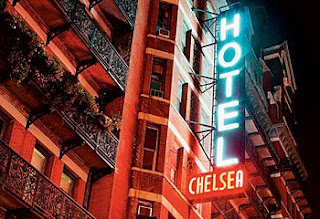 Ferrara moved in for several months in 2007 to document the end of an era, and the result is expectedly, and perhaps appropriately, a cluttered and erratic affair. The director interviews an assortment of residents past and present, cussing and interrupting from behind the camera. Some of these chats are interesting, while others are rambles about suicides, drug dealers, ghosts and police raids. Unfortunately none of the interviewees are identified on-screen, as if to say "tough luck if you're not cool enough to know who these people are." I did recognize Czech director Milos Forman, who stayed at the Chelsea for two rent-free years when he first moved to America. Forman tells a great story about being half naked (the bottom half) and locked out of his room during a hotel fire. Ethan Hawke, who has made his own film about the Chelsea, also has a few good tales to tell.

In addition to the interviews, Ferrara incorporates some nice archival materials and lovely footage of the hotel's physical structure; its corridors, windows, railings and doorways. What absolutely does not work, however, are two clunky re-enactments—one of the Sid and Nancy "incident" and the other of Janis Joplin partying and passing out. (The latter contains a brief appearance by Grace Jones, a personal favorite who hasn't graced a screen since 2001's Shaka Zulu: The Citadel.) In place of these flashbacks, I might have wished for more of Stanley Bard, the hotel's longtime manager. His largesse and compassion gave many a starving artist a place to live until their ship came in. Everyone in the film talks about him, but his own segment in the film is relatively brief. Abel Ferrara's last two films received neither theatrical nor DVD release in the U.S., and it appears that this, his first feature documentary, is headed for a similar fate. So if you're a fan of the director or interested in the Chelsea Hotel, it's best not to miss opening night at this year's DocFest. 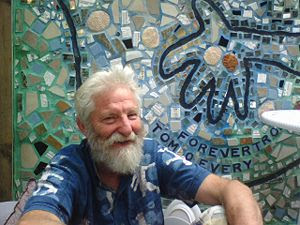 Every summer when I visit my friends Richard and Michael in their South Philadelphia home, I'm awestruck by a series of elaborate mosaics that line one side of South Street. In a Dream is the story of Isaiah Zagar, the artist who created them. Using tile, glass, mirror and broken pottery, Zagar has created a wonderland of mosaics covering over 50,000 square feet spread over seven buildings. They're a loving testament to his wife and muse, Julia, and their two now-grown sons. Youngest son Jeremiah is the film's director, and he uses a number of effective devices—collage, animation and fluid camera movement—to exemplify the beauty of his father's art. That familial connection is also the reason we get such a painfully honest accounting of both Zagar the artist and Zagar the man—particularly when during the film's shoot, an indiscretion on Zagar's part threatens to destroy his family from within. In a Dream is personal non-fiction filmmaking at its very best. 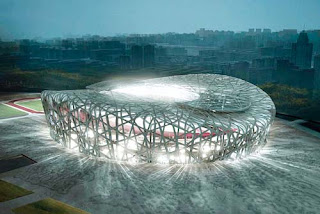 Another film I previewed was Bird's Nest: Herzog & de Meuron in China. As everyone in the world now knows, the Bird's Nest is the Beijing stadium built for this summer's Olympics. Herzog and de Meuron are the Swiss architects who designed it (they also built the de Young Museum in Golden Gate Park) and the film documents their five-year endeavor to make both themselves and the Chinese government happy. Unfortunately, the film is pretty dry stuff, with little in the way of lyricism for a documentary about such a beautiful building. Too much of the film focuses on a Herzog & de Meuron urban development project in the Central Chinese city of Jinhua, hindering the narrative flow of the Bird's Nest story. What I ultimately took from the film was an appreciation for the nuances and signifiers that come into play when two cultures undertake a project as massive as this one.

These three films only begin to scratch the surface of what's on offer. A highlight of the festival is sure to be the tribute honoring filmmaker Melody Gilbert, recipient of DocFest's first Someone to Watch Award. Longtime attendees of both IndieFest and DocFest might already be acquainted with Gilbert's work and its singular subject matter. This year we'll have the opportunity to watch five of her films, including Married at the Mall (about couples tying the knot at America's largest shopping mall), Whole (a profile of people who only feel "complete" after amputating a healthy limb), A Life Without Pain (a study of children with a neurological defect that doesn't allow them to feel physical pain), Urban Explorers (a look at adventurers who seek out forbidden places, from abandoned insane asylums to Parisian catacombs) and her latest work Disconnected (in which three college students give up computers cold turkey). Then, in "A Chat with Melody Gilbert", the director will receive her award, shows clips from her films, offer her Top 10 doc-making tips and present a sneak peak of her current documentary-in-progress.

A few other films worth mentioning are the titles I alluded to in my opening paragraph: Here, Kitty Kitty, Come On Down! The Road to "The Price is Right", Twisted: A Balloonamentary and Bigfoot: A Beast on the Run. I can heartily recommend The People's Advocate: The Life & Times of Charles R. Garry, which I saw at last year's Mill Valley Film Festival. (Other DocFest08 films that have previously played Bay Area festivals include Dust, Anvil! The Story of Anvil and Megalopolis.) Enlighten Up!, which did quite well during a recent theatrical run in New York, examines the $18 billion yoga industry. Finally, the film I'm most looking forward to is The Linguists, in which two scientists travel the world documenting languages on the verge of extinction.

So there you have it—a quick look at perhaps one-third of this year's DocFest program. If none of these films sound interesting to you, check out the rest of the line-up at the SF Indie website and I promise you'll find something that does.
Posted by Michael Guillen at 10/09/2008 09:15:00 AM