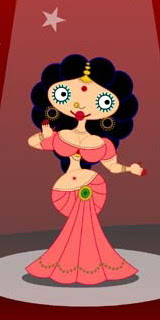 In its third edition spread over four days from November 13-16, 2008 at Landmark's Embarcadero Center Cinema, with special live events at the Apple Store and the Ninth Street Independent Film Center, the San Francisco Film Society presents the San Francisco International Animation Festival (SFIAF), which celebrates "one of the most fertile, creative and productive forms of artistic, experimental, commercial and industrial media." In the ol' days we called them "toons"; but, some highfalutin words are required nowadays to express the strength and breadth of this year's eclectic program, curated by SFFS programmer Sean Uyehara. 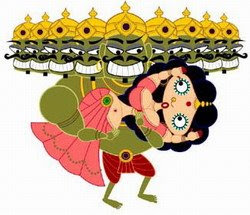 Two years back Nina Paley workshopped her first feature-length film Sita Sings the Blues at Stephen Parr's Oddball Films. The program was wildly successful and so it came as a surprise to me to read that Sita Sings the Blues inspired controversy earlier this year at the Tribeca Film Festival. As Eric Kohn reported to The Jewish Daily Forward, Hindu fundamentalists—never known for their sense of humor—were convinced Paley had defiled their sacred traditions. "Have fun representing white people with your cultural appropriation and misrepresentation" went one rant, while religious conglomerate Hindu Janajagruti Samiti fumed that "Paley is trying to bring Sita down to the level of mortal love experienced by her, a product of materialistic-individualistic ideology." To borrow from Bill Maher's lexicon: how religulous! In my estimation, Paley has done more to familiarize the uninitiated with the Indian classic The Ramayana—let alone the sweet hot ("that's all!") jazz of Annette Hanshaw—than any grimacing fundamentalist. Despite controversy, Paley's beautifully animated East-meets-West visual feast has delighted audiences around the world, taking the top prize at Annecy, the world's premier animation festival. Decide for yourself when Sita Sings the Blues screens twice on SFIAF08's opening night at 7:00PM and 9:15PM, Thursday, November 13, with Paley in person to discuss her triumphs and travails at a reception sandwiched inbetween the screenings at the former Gallery One Space, on the lobby level below the theater. 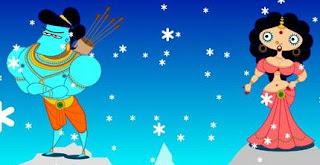 Inbetween effects projects with Bong Joon-ho's The Host and Rodriguez/Tarantino's Grindhouse, I met up with Webster Colcord at San Francisco's The Orphanage for an SF360 interview. I'm delighted for the chance to catch up with Colcord and his Orphanage collaborator Corey Rosen for their SF360 Live discussion: "2½-D: New Aesthetics in the 3-D Environment", offered free at the Apple Store, One Stockton Street, on Friday, November 14, 3:00PM. This presentation will lay out the creative issues that stand between 2-D and 3-D.

From their Apple Store presentation it's back to Landmark's Embarcadero Cinema for the 6:30PM screening of Locomotion, a collection of short films that "bring a fascinating and fascinated eye to the mechanics of movement." Director Mike Roush will be present to discuss his entry "The Hidden Life of the Burrowing Owl."

Locomotion is followed at 8:30PM by "The Best of Annecy 2008." Widely regarded as Europe's most important animation festival, SFIAF08 is pleased to present a selection of the best shorts from this year's program.

At 10:15PM, Webster Colcord returns to introduce his animated music video "The Dandy Warhols: Welcome to the 3rd World", part of the Play It By Eye program, which reprises SFIAF's popular survey of the best recently completed animated music videos. This survey mixes established veteran directors like R. Malcolm Jones, Nima Nourizadeh and Joel Trussell with up and comers such as Flourescent Hill and Stephane Manel and design stalwarts such as Motomichi Nakamura. Come rock out to The Dandy Warhols, The Chemical Brothers, Gnarls Barkley, and The New Pornographers, among others.

On Saturday, November 15, SFIAF08 kicks off with a 10:30AM "Meet the Maker: Practice and Craft" session with Gene Deitch at Ninth Street Independent Film Center, 145 Ninth Street. Maverick animator Gene Deitch will discuss his 50-plus years in animation, touching on key moments in his career such as heading Terrytoons, being the creative director at UPA and working with writers Maurice Sendak and William Steig. He'll also address contemporary issues in animation.

The festival proper commences at Landmark's Embarcadero Cinemas with the high noon presentation of Play: The Art of the Animated Film Title, wherein animation's major role in the history and design of film titles is explored.

At 1:45PM there will be an encore screening of Best of Annecy 2008, followed at 3:30PM by Encyclopedia Pictura. This enigmatic collective made up of Sean Hellfritsch, Darren Rabinovitch and Isaiah Saxon "is enjoying a groundswell of notice for its inventive and precise application of puppetry, construction, mathematics, animation and design, as seen in their wildly creative animated, live action and hybrid pieces." All three directors will be present to answer queries regarding "virtual reality, psychokinetic energy, anarcho-primitivism, cryptozoology, natural geometry and psychedelic shamanism." Get ready and burnish your questions.

Encyclopedia Pictura will be followed at 5:15PM by Control Freaks, a collection of shorts where the questions continue: "Are we the masters of our destinies? Does your response depend on whether or not you are an air-filled cell on a sheet of plastic?"

The SFIAF08 program then shifts to questions of memory and its therapeutic practice with the 7:15PM screening of Ari Folman's tour de force exploration—Waltz With Bashir—a standout of the main competition section at this year's Cannes Film Festival. Waltz With Bashir "focuses on a politically charged, nonfictional event with such force and thoughtfulness that it recasts the dramatic potentials of long-form animation." Folman's uncompromising feature exemplifies how "the malleable, expressive nature of animation" can "communicate essential ideas about the subjective nature of truth."

Next at 9:45PM is Bill Plympton's Idiots and Angels, "a dark and humorous allegory about morally bankrupt men." Sound like anyone you know? Share resemblances with director Bill Plympton who is expected to attend.

SFIAF08 wraps up on Sunday, November 16 with a follow-up on Gene Deitch's Ninth Street Independent Film Center presentation. Deitch will present an 11:00AM "Retrospective of Films for Children" at Landmark's Embarcadero Cinema. This program will focus on his child-friendly works including adaptations of stories by Maurice Sendak and William Steig, his Oscar-winning classic Munro and some of Deitch's own favorites and surprises.

The Deitch program will be followed by encore screenings of Idiots and Angels (1:00PM) and Waltz with Bashir (3:30PM).

Looks like a terrific line-up; I hope I can finally make it to this festival in 2008!

You've not made it the two previous years? I'm surprised. I thought animation was your thing. I agree, though, that if this is your introduction, it's a great program. Sean Uyehara has outdone himself.

It's definitely one of my things. But it's always fallen at a bad time for me- this year's 1-week postponement certainly helps me out. And the programming looks like it could be the strongest yet.

Catch "Idiots And Angels" if you can...I just saw it here in Toronto at the After Dark Film Festival and thought it was terrific. After viewing the trailer, I thought Plimpton's animation style might wear on me for an entire feature, but it did nothing of the sort. He plays with all sorts of nifty transitions and perspectives and it's constantly inventive. I also completely forgot that the film has no dialog until afterwards...It doesn't need a single word to be spoken.

Michael, I also caught "Let The Right One In" (the opening film and the first sell out the fest has ever had) and loved it.

Hey Bob, always nice to hear from you. Thanks for stopping by. I have every intention of catching Idiots and Angels and even have an interview request in for Mr. Plympton. Glad to hear you've given it a thumbs up. So did Kurt Halfyard over at Twitch.

And sooooo glad you got to see Let the Right One In, which will be opening here in SF for a week's run. I look forward to catching it again.

I was sitting right next to Kurt during the screening actually...B-)

I also quite liked Plympton's (damn, I spelled that wrong in my last comment) short "Shut-Eye Hotel" that was shown during the Shorts program. Same style, but more of a fun Noirish take.