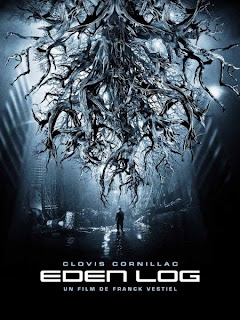 Since August 2007, Todd Brown at Twitch has been faithfully tracking Franck Vestiel's Eden Log, providing the first teaser (in French); the selfsame teaser translated into English; the second teaser (in French); the news that Magnet Releasing—the genre arm of Magnolia Pictures—picked up North American distribution rights; the launch of the film's official website; the arrival of the film's full trailer; and finally his review from the 2008 Toronto International Film Festival where Eden Log screened as part of the Midnight Madness program. Following suit, the San Francisco Film Society offered a midnight screening of Eden Log as part of their first annual French Cinema Now series.

A brooding, philosophical riff-in-reverse on the Biblical story of Eden, Todd presciently predicted that Eden Log will divide audiences between those willing to patiently experience the obfuscated nocturne of Vestiel's dystopian mise en scène (atmospherically rendered by cinematographer Thierry Pouget), or impatiently dismiss it as sheer pretension. But even Lisa Nesselson in her less-than-favorable Variety review concedes that Vestiel is "a talent to watch, creating and sustaining a hermetic universe for his bewildered yet resourceful hero to explore." By all accounts, what it lacks in narrative traction, Eden Log gains in a moody, determined momentum, as protagonist Tolbiac (Clovis Cornillac) is introduced in stroboscopic flashes emerging steaming from mud on Level Four, disoriented, amnesiatic, with one objective: to get to Level One where he might find some answers. Along the way he encounters some horrifying obstacles.

I'm in agreement with Todd that—as effective as Eden Log is on its own merits—it's a curious choice for a midnight screening. "High energy it ain't." It's ambient drone would have knocked me right out. I'm glad I caught it on screener mid-day with senses fully alert so that I could appreciate its moody meander.

Eden Log, along with the Swedish coming-of-age vampire flick Let the Right One In that I recently caught (and loved) at Dead Channels 2008, is part of Magnet Releasing's 6-Shooter Film Series. The series "fires up" this month and continues over the next few months (presumably at the Landmark cinemas and hopefully not at midnight) with Let the Right One In (I'm so happy I'll get to see this again before it's potentially ruined by the remake) and will include Special, Nacho Vigalondo's wonderful Timecrimes (another Twitch favorite), Sundance favorite Donkey Punch, the hilariously absurd Big Man Japan, and—as mentioned—Eden Log.

Wow, that really looks great. I hope it will be released in germany..

I know the film played in late March earlier this year at the Fantasy Filmfest in Germany but I've heard nothing about German theatrical distribution.