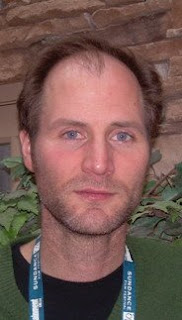 Lance Hammer's debut feature, Ballast—now playing in San Francisco—premiered at January's Sundance Film Festival to resounding critical fanfare, winning prizes for best director and cinematography. It followed with awards in Buenos Aires, Boston and the 51st San Francisco International Film Festival, where I had the opportunity to sit down with producer-director-writer Lance Hammer to discuss the film's impressive structure. Since our conversation, Hammer's film has been navigating the hazardous waters of distribution and has—as Anthony Kaufman at indieWIRE states it—"steadied its course" by opting out of a distribution deal with IFC Films in order to self-distribute through the film's production entity, Alluvial Film Company, along with Steven Raphael's Required Viewing. This brave maneuver places Hammer in the vanguard of independent filmmakers strategizing new models for theatrical self-distribution. Our conversation is up at SF360.
Posted by Michael Guillen at 10/18/2008 09:41:00 AM

great interview, Michael. I've long admired Mr. Hammer's unique path, and his commitment to compelling filmmaking. His comments on the probability of making his next film, or the difficulty of securing financing, are sobering though.

Indeed. I hope his fears are unfounded; but, much of that will depend (I suspect) on the economics of his self-distribution.