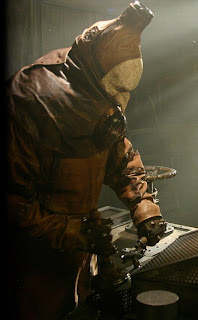 Canadian animator Troy Nixey is best-known as a graphic illustrator who has collaborated with such notable creators as Mike Mignola and Neil Gaiman, as well as creating his own works. As reported by filmbud Peter Sciretta at /Film, Guillermo del Toro—after seeing Latchkey's Lament—tapped Nixey on the shoulder to direct the remake of the 1973 cult classic telefilm Don't Be Afraid of the Dark. "Now you know the kind of film you have to make to catch Guillermo del Toro's attention," Dead Channels programmer Bruce Fletcher quipped in his introduction.

As Tentaco Productions synopsize at the film's official website, Latchkey's Lament employs a blend of CGI animation and live action to tell a tale of love and heroism. Mr. And Mrs. Key are snatched from their home late one evening by the insidious Keyfiend and taken back to his monolithic factory. There Mr. Key witnesses the demise of his wife at the hands of the Keyfiend. Mister Key must escape the Keyfiend's clutches if he is to survive and avenge the spirit of his beloved. 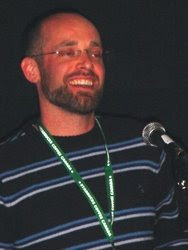 Latchkey's Lament screened at the 2007 Toronto International Film Festival in the Short Cuts Canada Programme 3 and—as Michael Sauve detailed in his write-up of the program—"Troy Nixey spent five years lovingly constructing his ambitious short." Ambitious it is and darkly beautiful, veined with a uniquely mesmerizing mystery and magic, clearly expressing the phantasmagorical sheen familiar to the imagined terrains of Evening Class favorite Guillermo del Toro. Along with Madame Tutli-Putli, Latchkey's Lament assures Canada's competitive position in the world of animation and Don't Be Afraid of the Dark is one remake not to be afraid of and one—in fact—to highly anticipate.