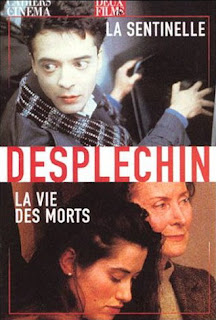 The French Cinema Now revival screening of Arnaud Desplechin's rarely (if ever) seen first feature film Life of the Dead (La vie des morts, 1991) was a welcome meditation on the presence of the oak in the acorn. It proved to be a perfect companion piece to A Christmas Tale for prefiguring many of the themes and methods expressed more fully in Desplechin's critically-acclaimed recent work, including a family gathering pulled into the gravitational field of the death horizon via an attempted suicide.

Where Life of the Dead differs from A Christmas Tale is that the family has gathered for a death watch, instead of a competitive if not hopeful negotiation to save the life of their matriarch. But the intrafamilial hatred is amusingly familiar in retrospect, including the embittered daughter Pascale (Marianne Denicourt) trying to rule the family brood through sheer animus if not animosity and Emmanuelle Devos as the girlfriend caught unwittingly wide-eyed in the crossfire.

Clocking in at a mere 54 minutes, Life of the Dead sketches characterizations of its immense ensemble but remains attractive for its sheer ambition and Desplechin's creative compulsion towards stylistic density. As Desplechin stated to Dennis Lim in a May 2005 Village Voice interview: "It's a lot of work to have density—to fill the screen with details and small stuff, trying to imagine for each character a past and a future. I think it has to do with a hunger and it goes back to my first film [La Vie des Morts]. I was scared to death that I would never make another one, and I wanted so much to work with actors, so even though it was very low-budget and we only had five days, I wrote more characters than I could really put in: 25 actors in this one-hour film. I was hungry—I just wanted a lot of them, quantity not quality, different actors, different ages." In his earlier review for the Voice, Lim characterized Life of the Dead as "a terse, acrid riposte to The Big Chill."

"La Vie des morts reflects the existential need for reassurance through self-distraction and the conduct of everyday rituals within the collective crisis of imminent death," writes Acquarello at Strictly Film School.

I need to commend the San Francisco Film Society for scoring this archival print for their newly-launched French Cinema Now series. The opportunity to see such a rare film unavailable on DVD is a cinephile's treat and a wonderful way to appreciate how Desplechin's work has developed over the past decade and a half.