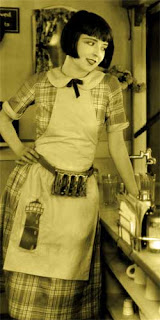 In his communiqué to Cineaste magazine from last year's Toronto International Film Festival, Richard Porton noted that André Bazin had already observed in an essay for Cahiers du Cinema "that the contemporary film festival resembles nothing so much as a religious order", especially as most "cinephilic members of the press and the public are tied to a relatively monastic regime—seeing four to six films a day and grabbing what are inevitably inadequate amounts of nourishment and sleep." This apt prediction for next week's San Francisco Silent Film Festival ("SFSFF") is underscored by Michael Hawley's own admitted anticipation.

* * *
Until I began attending the SFSFF, I perceived watching silents as somewhat akin to a duty or chore. Perhaps it stemmed from being forced to view Battleship Potemkin's Odessa steps sequence over and over again in a university film theory class? Over the years I'd occasionally catch a new print of some indisputable classic of the era, such as the mega-event of Abel Gance's Napoleon at Oakland's Paramount Theater in the early '80s. These experiences were rarely unpleasant or unrewarding, but watching silent films never became the kind of thing I'd seek out.

That all changed in 2006 when, after having ignored the festival for the first decade of its existence, I attended four programs at the 11th edition, followed by six programs last year. With their impeccable prints, sublime and eclectic musical accompaniments and scholarly program notes (not to mention taking place in one of our nation's few remaining silent movie palaces), the festival has definitively proved the validity of its motto that "True art transcends time." With the 13th edition looking to be its most wildly varied yet, I'm happily resigned to spending the entire weekend of July 11 to 13 holed up in the Castro Theater. So whenever you're ready, Mr. Peabody, please set the Wayback Machine to 1920's San Francisco, as we prepare to indulge ourselves in 30-plus hours worth of these glorious images from the past. 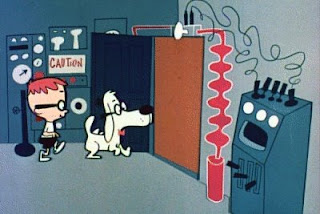 For an in-depth look at this year's line-up, you can't beat Donna Hill's Stolen Moments podcast interview with SFSFF Artistic Director Stephen Salmons. For over an hour these two silent film scholars have a genial, film-by-film discussion of the program, from which I've gleaned a few tidbits for the more general SFSFF overview which follows. 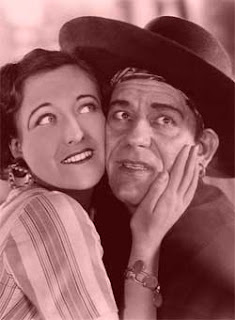 Although it'd be logical to tackle the line-up in chronological order, I'm jumping ahead to the program I anticipate will be my personal Bay Area Movie Event of the Summer—Tod Browning's 1927 The Unknown. Best known for his early sound-era cult classics Freaks and the original Dracula, The Unknown is the third Browning silent feature to be presented by the SFSFF. Salmons describes it as "the weirdest of the three" and "extremely shocking," while Hill simply states that "sick is the word" for this one. Lon Chaney stars as an armless man with a knife-throwing circus act (yes, he throws with his feet) and Joan Crawford is his lovely assistant with a pathological fear of being touched by men. What elevates this screening to "event" status is that it was chosen by none other than Guy Maddin, in what the festival hopes will become an annual Director's Pick series. Maddin will introduce the film (and as anyone familiar with his former Film Comment old-movie column "My Jolly Corner" will attest to, this should be screamingly funny), as well as provide simultaneous translation of the film's French inter-titles. The Unknown unspools at the appropriate hour of 10:45PM on Saturday, July 12. 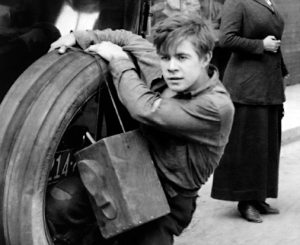 Saturday will be quite a long day at the festival, starting at 10:00AM with Amazing Tales from the Archives. This free program spotlights the L. Jeffrey Selznick School of Film Preservation and will include a selection of silent shorts recently restored by its students. If, like me, you're unable to attend this presentation, you'll be happy to know that a different Selznick School short will screen before each feature film throughout the weekend. Following Amazing Tales at 11:40AM will be The Soul of Youth, William Desmond Taylor's 1920 social realist drama about orphans, urchins and the American juvenile court system. Taylor is perhaps best remembered for his mysterious, still unsolved 1922 murder, and the festival is offering The Soul of Youth as "proof that we should commemorate him as a director of singular artistry." 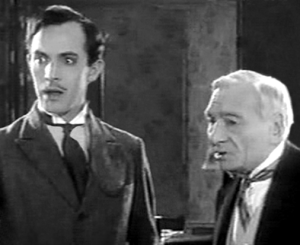 The next four programs on Saturday, up to and including The Unknown, are all personal must-sees. Up first at 2:15PM is Les Deux Timides (Two Timid Souls) by French iconoclast René Clair (Entr'acte, À nous la liberté). This 1929 comedic farce concerns a lawyer who falls in love with a woman who's about to be married off to the convicted wife batterer he failed to properly defend in court (whew). This doesn't sound too funny, but Salmons claims it's "a total hoot," especially in its abundant use of sight gags employing split screens, cross cutting and slow/fast/reverse motion effects. Musical accompaniment for the film will be provided by Bay Area French dancehall ensemble Baguette Quarette, making their SFSFF debut. 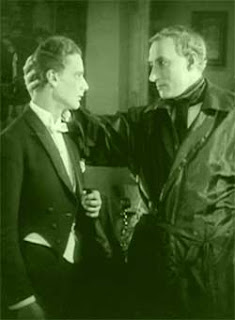 With Saturday's 4:15PM screening of Carl Theodor Dreyer's 1924 Mikael, the festival makes a 180 degree turn from the frivolity of Les Deux Timides. This somber, yet powerful drama is considered one of the landmarks of gay cinema, and stars Benjamin Christensen as a renowned artist and Walter Slezak (the Nazi who commandeered Tallulah Bankhead's Lifeboat) as his youthful source of inspiration. This is the first time the SFSFF is showing a film by Dreyer, who would go on to direct one of the best known silent films of all time, 1928's The Passion of Joan of Arc. 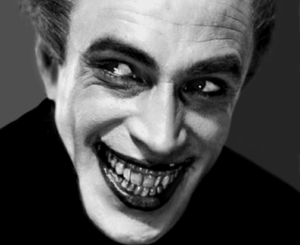 Saturday evening's program kicks off at 7:45PM with the festival's Centerpiece Film (and the perfect lead-in to The Unknown), German Expressionist director Paul Leni's 1927 The Man Who Laughs. Based on an obscure Victor Hugo novel, this gothic romantic melodrama stars Conrad Veidt (Dr. Calagari's scary somnambulist) as an English nobleman's son whose face is disfigured by a gypsy surgeon. The handiwork results in a frozen, maniacal grin, which Batman creator Bob Kane claims served as the visual inspiration for The Joker. According to Salmons, the Library of Congress 35mm print which will be screened at the festival is an especially gorgeous one. 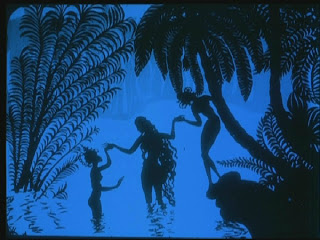 Provided that I haven't been kept awake all night by nightmares inspired by The Man Who Laughs and The Unknown, I plan to be at the Castro bright and early on Sunday morning for the 10:30 am screening of The Adventures of Prince Achmed. Lotte Reiniger's 1926 film lays claim to two impressive distinctions—it's the earliest surviving feature-length animated film and the first animated feature made by a woman. Employing a cut-out silhouette animation technique inspired by Indonesian shadow puppet theater, the film took a full three years to make. The story is inspired by several tales from 1001 Arabian Nights, specifically the one in which Achmed enlists the help of Aladdin, a witch and a magic horse in order to battle an evil African sorcerer and win the hand of Princess Peri Banu. 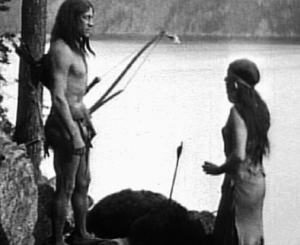 Sunday's next film holds the honor of being the very last silent movie ever shown on Broadway. H.P. Carver's 1930 The Silent Enemy is a scripted, ethnographic documentary in the style of Robert Flaherty (Nanook of the North) and tells a pre-Columbian tale of Canada's Ojibway Indian tribe and their perpetual hunt for food (hunger being the film's titular silent enemy). Please be advised that animals were definitely harmed in the making of this film, which screens at 1:10PM. 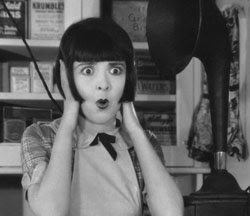 Colleen Moore was America's top box office star in 1926, but very few of her films survive today (she remains perhaps best known for introducing the bobbed flapper haircut in 1923's Flaming Youth). Moore makes her SFSFF debut at 3:50 pm in 1927's Her Wild Oat, in which she plays a wise-cracking lunch wagon owner masquerading as a rich society dame. A highlight of the film is said to be George Marion Jr.'s clever and slangy inter-titles. Apparently Marion's talent in this field was so well regarded that his name often appeared on movie theater marquees. Also, look for an appearance by a 14-year-old Loretta Young. 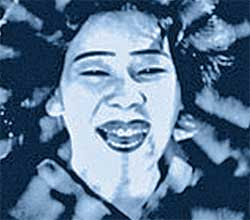 I've missed several opportunities over the years to see Teinosuke Kinugasa's 1926 silent avant-garde classic A Page of Madness. Sunday evening at the SFSFF begins at 6:10 pm with a screening of Jujiro, a film he made two years later. This will be the first Japanese film ever shown at the festival, and their capsule review promises a "heightened avant-garde blast of rampant symbolism, distorted architecture, flashbacks, flash-forwards and deliriously subjective cinematography." According to Salmons, Jujiro represents "the outer edges of silent-era filmmaking," and he promises that Stephen Horne's newly composed score rivals the one he composed and performed for last year's unsettling A Cottage on Dartmoor (for which he received a standing ovation). Another reason I'm anticipating this film is because the program notes have been written by Brian Darr, host of the indispensable Hell on Frisco Bay. 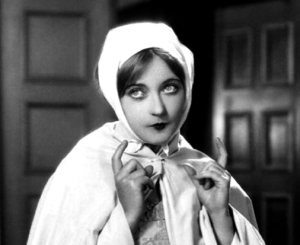 The festival comes to an end with an 8:45PM screening of King Vidor's 1928 comedy, The Patsy, which stars Marion Davies (in a rare comedic role) and legendary screen battle-axe Marie Dressler (Dinner at Eight, Tugboat Annie) as dueling daughter and mother. And lest I forget, the festival opens on Friday night with another comedy, Harold Lloyd's 1927 The Kid Brother, followed by an opening night party in the Castro Theater mezzanine.

One of the best things about the SFSFF is that you get both a movie and a magnificent concert for the same ticket price (admission ranges from $14 to $20 for non-members). This year's list of accompanists should be familiar to all festival returnees. In addition to the aforementioned Jujiro, Stephen Horne will work his magic on The Soul of Youth and The Unknown. Maestro Clark Wilson will attend to The Man Who Laughs and The Patsy, while Donald Sosin handles Mikael and The Adventures of Prince Achmed. The Mont Alto Motion Picture Orchestra returns to the festival for a second year, accompanying The Kid Brother and The Silent Enemy. Michael Mortilla and newcomers Baguette Quartette score one film apiece, Her Wild Oat and Les Deux Timides respectively. Unfortunately, Dennis James, whose heart-pounding score for Cecil B. DeMille's The Godless Girl closed last year's festival, will not be performing this year.

Once again San Francisco's The Booksmith will host a series of book-signings in the Castro Theater mezzanine throughout the weekend. Scheduled authors include Guy Maddin and Leonard Maltin, who will also be on hand to introduce several of the screenings. And the best news of all? McRoskey Mattress Company will once again sponsor a festival raffle, the top prize being a $5,000 shopping spree at its Market Street showroom. The winner will be announced on Closing Night, and what a heavenly way to end the weekend that would be.

Way to crank up the anticipation-
I can barely contain myself now!

Thanks for stopping by to comment, Shahn; I'm glad you're as excited as Michael Hawley and me!