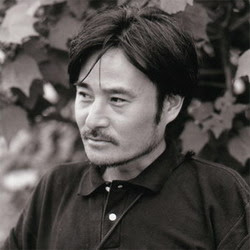 Welcome to the Kiyoshi Kurosawa Blogathon! Enthusiastic after the Val Lewton Blogathon, I announced this roundelay and then began to have immediate misgivings, partly because I have not had the opportunity to view much of Kurosawa's early work and—sadly—not had the opportunity to view his most recent (Loft and Retribution never made festival nor theatrical Bayside appearances). I started wondering if I shouldn't wait until these opportunities presented themselves? I debated whether the blogathon shouldn't be postponed until after I caught Tokyo Sonata at the Toronto International? But then while reading an essay on Loft written by author Jerry White for his volume The Films of Kiyoshi Kurosawa: Master of Fear—which Girish Shambu so kindly forwarded to my attention—I was struck by a comment Kurosawa made regarding that poorly-received project: "I had to do something that was a horror film; but, at the same time, I wanted to destroy horror films." (2007:201, emphasis added.) From the little I've read about Tokyo Sonata, it appears Kurosawa has achieved an ambition that has preoccupied him these last few years: to work past what his audiences have come to expect of him by escaping the stranglehold of J-Horror with which he has become restrictively associated. That being said, I felt this blogathon should address Kurosawa's career up to but not including Tokyo Sonata, which seems to indeed mark a significant departure from his existing oeuvre. So this blogathon will proceed in a retrospective mood with Tokyo Sonata signifying the advent of a separate phase of Kurosawa's auteurism.

Kiyoshi Kurosawa hardly needs introduction. To that purpose, I refer readers to his general IMdb and Wikipedia profiles (with more online resources to follow). For starters, however, French critic Mathieu Ravier's appreciative overview of Kurosawa's career written for this year's Sydney International Film Festival suffices nicely, drawing some fascinating comparisons with the films of Michael Haneke. "Like Haneke," Ravier writes, "Kurosawa is able to charge even the most banal scene of domestic life with a sense of dread. Elaborate sound design and counter-intuitive framing conspire to create an atmosphere rich with possibility. From the smallest of disruptions, a tiny tear in the social fabric, everything can unravel." Though not available online, Kent Jones' recent career purview for the current issue of Cinema Scope likewise addresses the mature breadth of Kurosawa's evolving oeuvre and is a strongly-recommended read.

This entry will serve as the shell for incoming contributions and—during the course of the week—I will post separate entries regarding my focused interests. 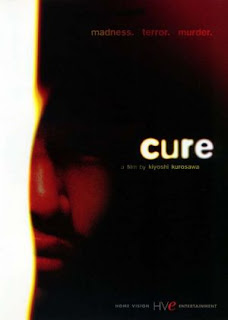 Noel Vera revived a February 2003 appraisal of Kurosawa's films originally written for Businessworld at his site Critic After Dark and timed it so it would link in with the blogathon. In his piece—"Zen and the Art of Horror Filmmaking"—he wrote that what distinguishes Cure from more traditional police procedurals is that "the killings don't have a pattern, they have a principle." Vera ventures that the philosophical principle defining Cure "is only vaguely glimpsed", parenthetically opining that such vague glimpses provide horror's "most unforgettable images", but he specifies that—however vague—the philosophy informing Cure "seems to consist of an awareness of the utter void at the center of existence, and of reacting to that void appropriately. Kiyoshi's achievement is not in attaching this philosophy to a horror story but in showing us the horror of the philosophy, in a story."

Proposing that Charisma may be "the first film ever to treat the act of tree poisoning as an existential process", Vera finds Charisma less "fine-tuned" than Cure, as if Kurosawa has lost control of his tonal segues. Notwithstanding, he praises Kurosawa's "talent for unsettling closures."

With Ningen Gokaku (License to Live, 1999), Vera observes that Kurosawa "approaches tragedy from an oblique angle, looking at the target with sidelong glances; you never hear him coming until he's right behind you, ready to blindside you with a single, overwhelming blow." He wonders if Kurosawa isn't "in love with death, or more to the point, with the nothingness that seems to lie beyond death"? 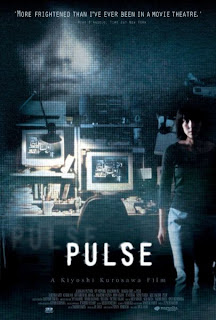 Additionally, Vera in his Senses of Cinema article on Kairo (Pulse, 2001) outlines the ex cathedra stances of the film's characters; a film wherein Kurosawa provides "two hells (isolation and the apocalypse) for the price of one." As Joseph B. details at It'samadmadblog, Pulse is one of the 15 scariest movies of all time, marking the end of the world in "hushed tones" and a "fragile sense of dread."

Although his initial intention was to create a video podcast essay to contribute to the Kiyoshi Kurosawa Blogathon, Matt Zoller Seitz ran out of time and, instead, reprinted his November 2005 New York Press review of Kurosawa's Pulse at The House Next Door. Any contribution by Matt is a welcome honor and we look forward to when time affords his video essay. Matt's Pulse review impressed me for describing so presciently Kurosawa's own definition of horror as a "roiling emotional undercurrent: the dread that comes from contemplating death." Matt explains: "Pulse chills us to the marrow by daring us to admit the unspeakable truth: that despite thousands of years' worth of religious and philosophical assurances, we still don't know if being dead is better than, equal to or worse than being alive, and we will never know until we're dead ourselves." 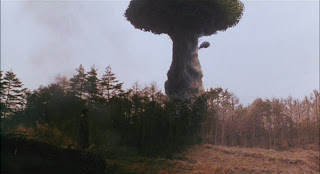 Offering up a piece he wrote earlier this year on Charisma for The Kinetoscope Parlor (with the admitted help of "several tasty bottles of Guinness"), Keith seeks to wrestle Kurosawa away from the grip of J-Horror assignations and, instead, traces literary resemblances to Kurosawa's alterities in the work of Japanese novelist Haruki Murakami.

Though not specifically tailored for the blogathon, Francis "Oggs" Cruz has generously offered two reviews previously written for his site Lessons From the School of Inattention. The first is a response to an early film of Kurosawa's—Jigoku no keibîn (The Guard From the Underground, 1992)—and the second from the more recent Sakebi (Retribution, 2006).

Oggs observes the purposeful illogic of the alternate universe of The Guard From the Underground. Much is left unaccounted for in the "visual allure" of the film's alterity. Less invested in his characters than in the sheer delight of filmmaking, Oggs discerns that Kurosawa is emulating Tobe Hooper's The Texas Chainsaw Massacre (1974), which makes the cut in Kurosawa's essay "What Is Horror?" "Somehow," Kurosawa writes of The Texas Chainsaw Massacre, "it's horror." For a "Kurosawa completist" like Oggs, The Guard From the Underground is "watchable fare." 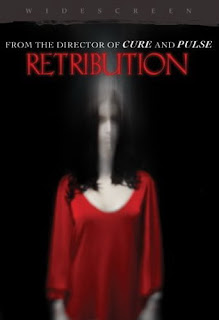 In Retribution, Kurosawa's actor fetiche Kôji Yakusho returns as Detective Yoshioka, once again investigating a series of murders that become increasingly more mysterious and supernatural. Oggs compares Kurosawa's trademark dilapidated architectural surroundings as demonstrative of Yoshioka's own internal combustion. "[Y]ou sense," he writes, "a tremendous fatigue both in his body and in his soul as if every ill memory of the past and the pressures of the present are conspiring to force him to decompose along with his surroundings." Proposing that society's primary sin is that of quiet indifference, Oggs finds it intriguingly ironic "that the punishment for the living's ineptitude for the basic requirements of humanity is dealt with by the dead; and quite sarcastically, it is the dead which is most capable of boundless amounts of compassion and care."

Dread—as the registered response to an awareness of death—has prevailed throughout the entries offered to this blogathon and Bob Turnbull at Eternal Sunshine of the Logical Mind has turned a discerning ear to the sound of dread in Kurosawa's films. Noted for their rumbling resemblances to the scores of David Lynch, Bob offers choice samplings from Pulse, Séance and Retribution.