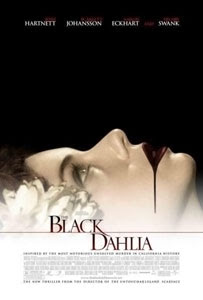 Along with the lineage that can be traced from Christopher Nolan's The Dark Knight (2008) back to Paul Leni's The Man Who Laughs (1928) is the latter's indelible imprint upon Brian DePalma's 2006 neo-noir The Black Dahlia, based on James Ellroy's novel, where mutilation reclaims its destructive thrust as an expressive mask of life's inequitable if not inevitable horrors. 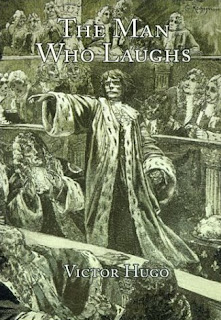 To synopsize briefly, in The Man Who Laughs—the filmic adaptation of Victor Hugo's 1869 novel—Gwynplaine (Conrad Veidt), the son of a noble father who has displeased King James II, is turned over to a surgeon, Dr. Hardquannone (George Siegman), associated with a band of ostracized and feared gypsies, the Comprachicos (literally "child-buyers"), for proper punishment: a facial mutilation which leaves him with a permanent and ghastly rictus grin. As a title card states, the King condemns him "to laugh forever at his fool of a father." Abandoned to a snowy death by the Comprachicos, Gwynplaine nonetheless survives—along with saving the life of a young blind girl Dea (Mary Philbin)—the two of them fortuitously coming under the care of Ursus (Cesare Gravina), who finds them sustainful employment as a sideshow act in a traveling carnival. 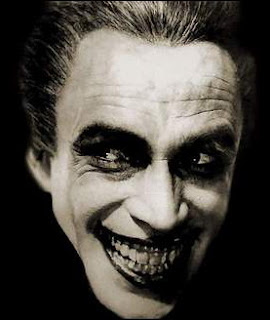 Several important image complexes are effectively working at once here in full polyvalency both in Hugo's novel and its filmic equivalent. As Roger Ebert has compassionately finessed in his review of Leni's film, "When images cannot be discussed, they must explain themselves." Which is to say that Gwynplaine's mutilated countenance is a guise or a mask, which—in true Dionysian temper—reveals as much as it conceals; "a wonderful cinematic grace note" fully appreciated by Eric Henderson in his Slant review where he observes the scene where Gwynplaine closes the doors of the mirror he has been forlornly contemplating and the audience "finds them ironically painted with the Greek masks of comedy and tragedy." Henderson likewise observes the conflicting aesthetics of German Expressionism that work against, if not through, each other; an "obsessive dualism" that further articulates the film's erotic triangulations. "Like many a German expressionist nightmare," Henderson writes, "The Man Who Laughs … is a collision of non-complementary angles and framing that confuses as often as it elucidates." The film's "fascination with bric-a-brac and its tendency toward spare, minimalist compositions" evidences, in Henderson's opinion, a "stylistic schism." 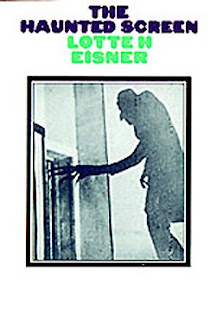 Quoting from Lotte Eisner's The Haunted Screen, her seminal study of German Expressionist silent cinema, Ebert "notes that the Expressionists often used unusually low ceilings and doorways in order to force their characters to walk stooped over or sideways. Their staircases rarely climbed frankly from floor to floor, but seemed to twist away into mystery. Dramatic lighting left much of the screen in darkness. Concealment and enhancement, not revelation, was the assignment of the camera. Eisner quotes Leni on the visual style of his Waxworks, made four years before The Man Who Laughs: 'All it seeks to engender is an indescribable fluidity of light, moving shapes, shadows, lines, and curves. It is not extreme reality that the camera perceives, but the reality of the inner event....' " [Emphasis added.] 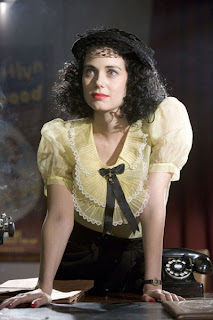 This tension between exterior appearances and interior realities pervades The Man Who Laughs and not only informs the legacy of Batman's archnemesis The Joker but also the unsolved murder mystery of California's "Black Dahlia", rendered in DePalma's eponymous neo-noir. That grisly crime had as its horrific evidence the body of a young startlet, Elizabeth Short, cut in half, with her mouth sliced into a rictus grin from ear to ear (commonly called "The Glasgow Smile"). The investigation of this shocking murder became the obsessive pursuit of two ambitious cops—Lee Blanchard (Aaron Eickhardt, coincidentally cast in The Dark Knight in the duplicit role of Harvey Dent) and Bucky Bleichert (Josh Hartnett)—and, likewise, involves a problematic erotic triangulation with Blanchard's girlfriend Kay (Scarlett Johansson). 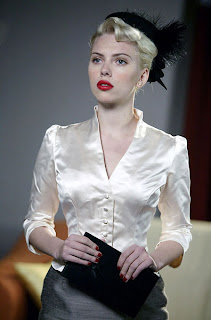 That triangulation is articulated through a scene in DePalma's film where Lee, Bucky and Kay—in what Village Voice critic J. Hoberman terms "an unlikely date"—catch a screening of Leni's The Man Who Laughs. In a September 2006 interview with Daily Breeze reporter Jim Farber, Brian DePalma stated, "If this film works, it's because I stayed scrupulously on the Ellroy road. I didn't try to change things. What I did do was try to find visual equivalents for some of the things he's doing in the book, like introducing a scene from the German Expressionist silent film The Man Who Laughs, rather than having somebody have to explain what that key image is all about. I tried to keep very much to Ellroy's story structure and the way he explains things, which sometimes explains nothing." Expressionistic dualism, anyone? DePalma's strategy in this scene is to observe how The Man Who Laughs reveals the varied interiority of his three main characters. As Armond White delineates for Cineaste, "Bucky is transfixed, Lee is bemused and Kay is frightened—reflecting their individual response to life's horrors." (Cineaste, 12/22/06). Hoberman qualifies Kay's "agonized response to [Gwynplaine]'s scarred face" by reminding that the audience soon discovers she herself has been branded. 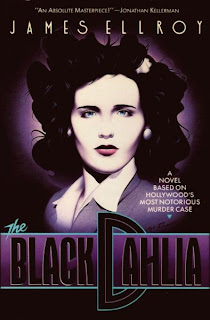 In conversation with Rachel Abramowitz for the L.A. Times, author James Ellroy stated that The Black Dahlia serves as "a whole metaphor for men and how we all go assertively into the world and how we countermand our own personal chaos by trying to impose order on external events." This collusive barter between criminality and the pursuit of justice, between chaos and order, is an apt description for the Batman/Joker dynamic and the obsessions of criminal investigators—both in the Black Dahlia and Zodiac cases, let alone Ellroy's L.A. Confidential—where law enforcement skirts the contamination of chaos while striving to bring heinous crimes to justice. The seductive allure of the dark force is an ageold theme, complicated by evasive presence, eluding capture.

The final analogy I will make between Paul Leni's The Man Who Laughs and contemporary films like The Dark Knight and The Black Dahlia is to measure the contemporary usage of the term "Comprachico", which—since the days of physical mutilations and disfigurements—has become adopted as a pejorative used to describe individuals and entities who psychologically manipulate the minds and attitudes of children in a way that will permanently distort their beliefs or worldview. 20th-century philosopher Ayn Rand referred to educators as "the Comprachicos of the mind" in her article "The Comprachicos". The role of chaos in the modern world in distorting the beliefs and worldview—keenly felt through international terrorism—cannot be emphasized enough, especially—when despite the civilizing experiment of morality—we have come to suspect that chaos is intrinsic if not necessary to the natural scheme. This is why The Joker is such a horrifying villain—especially as Heath Ledger has accessed him—because it's not "just about the money" or any other excusable or understandable vice, and it is why with rapt attention we grapple with the sordid unsolved crimes that taunt the lawmakers and haunt the corridors of power.