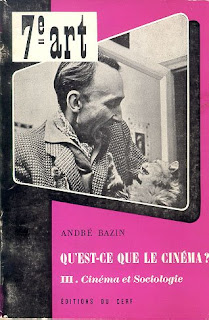 Girish Shambu's recent entries have been amazingly productive. If I were old-fashioned—which, in truth, I am—I would leave a big red apple on his desk and hand in the following as extra credit. I have conflated his entry on the "received wisdom" of critical shorthand with his entry on the scarcely-available published writings of André Bazin, aware that—in the case of Bazin specifically—I have received Bazin's wisdom precisely through numerous quotes that authors have craftily sifted from his voluminous writings. I tend to empty these quotes into an electronic file I've created on Bazin and—imagine my surprise!—when last I checked that file is already 40 pages long! And this without having so much as cracked open the covers of his two-volume Qu'est-ce que le cinéma? (What is Cinema?) or, for that matter, any of the other publications recommended by Professor Shambu's well-read readers. Embarassingly, the truth is that I haven't had the time to read Bazin's work even if I had thought to take the time; yet, somehow, I have filled my head with ideas of his that circulate as cinematic currency. In this respect I am in sincere awe of Girish Shambu who I fantasize reads about five books at a time, carrying them around like restaurant waiters negotiate stacked dishes. I imagine when he goes to sleep that—instead of using bedcovers to keep himself warm—he covers himself over with layers of books, wiggling his toes underneath (appropriately) footnotes. I equally admire his discipline of what scholar Reginald Gibbons would term "lisance"; that is, "a state of readingness." We should all be so lisant.

So because I don't imagine that—even should I wish—I will have the time to read Bazin between covers anytime in the near future (let alone use him as covers), I thought it might be nonetheless productive and helpful to share the wisdom I've received through a series of ongoing entries here at The Evening Class. Laziness loves company afterall.

For starters, I notice that the film critic who seems to cite Bazin the most is none other than J. Hoberman who has nearly singlehandedly kept André Bazin and his theories alive over the last decade through essays for The Village Voice and other miscellaneous publications. So let this be a study of how I have received Bazin via Hoberman through a not altogether unwelcome method of scholastic osmosis. I list these quotes and allusions in chronological order wielding no thematic continuity, with the caveat that in later entries I might approach the received wisdom of André Bazin via his most popularly circulated themes. Which is not to say that one doesn't need to read his published books; but, until time permits, I humbly accept what has been received, which I likewise admit is nowhere near definitive.

* * *
"The only difference between Stalin and Tarzan is that the films about the latter don't pretend to be documentaries."—J. Hoberman, "Socialist realism: from Stalin to Sots", Artforum International; 10/01/93. Hoberman sifted this quote from André Bazin's essay "The Stalin Myth," published in Movies and Methods, ed. Bill Nichols, Berkeley: University of California, 1985, II:35.

* * *
The Truman Show suggests that stardom too can be rationally produced. This spoof of what Mark Crispin Miller dubbed our National Entertainment State is a scenario that mixes the 1984 nightmare of absolute surveillance with the notion of an idiot-audience hooked on the vicarious thrills of virtual reality (or what André Bazin called the Myth of Total Cinema).—J. Hoberman, "Thru a lens darkly", Village Voice; 06/09/98.

* * *
The most influential movement in film history consisted of about 20 movies produced between 1944 and 1952. Italian neorealism was the original new wave. The inspiration for Jean-Luc Godard and John Cassavetes, Satyajit Ray and Ousmane Sembene, André Bazin and cinema verite, neorealism was understood as a double renaissance—both the medium's post-World War II rebirth and a means for representing human experience outside the conventions of the Hollywood entertainment film.

Bazin, who would be neorealism's key celebrant, praised The Bicycle Thief's premise as "truly insignificant . . . A workman spends a whole day looking in vain in the streets of Rome for the bicycle someone has stolen from him." If The Bicycle Thief understood neorealism as a style, Bazin appreciated it as "pure cinema . . . No more actors, no more story, no more sets . . . the perfect aesthetic illusion of reality."—J. Hoberman, "Wheels of history", The Village Voice; 10/06/98.

* * *
After World War II, [Henri] Langlois began the practice of showing the entire serial [of Les Vampires] at one time, and it was in this pure, if disorienting, form that [Louis] Feuillade was embraced by a second generation of French cineastes—including the critic André Bazin, who wrote enthusiastically of one marathon screening that required a reel change every 10 minutes, and the director Alain Resnais, who called Feuillade ''one of my gods'' and, by quoting Les Vampires in Last Year at Marienbad, was only one of several distinguished French directors to pay homage to Feuillade.—J. Hoberman, "Film; Classic 'Junk,' Saved From Trash", The New York Times; 10/25/98.

* * *
Harry Lime turned out to be Welles's most celebrated movie performance after Charles Foster Kane. Indeed, the ruthless Lime is an alternative Kane—similarly worshiped and betrayed by Joseph Cotten. André Bazin would suggest that this role made Welles into a myth.—J. Hoberman, "Dark City", Village Voice; 05/11/99.

* * *
"If the plastic arts were put under psychoanalysis, the practice of embalming the dead might turn out to be a fundamental factor in their creation." So André Bazin provocatively began his famous essay "The Ontology of the Photographic Image." It was Bazin's thesis that the artistic impulse was rooted in a "mummy complex"—his playful name for the primitive desire to preserve life through its representation.—J. Hoberman, "Between Two Worlds", The Village Voice; 05/18/99.

* * *
"For [Erich von] Stroheim, a film was merely the most efficient means of affirming his character and his relationships with others, particularly women," André Bazin once wrote.—J. Hoberman, "Too much, too soon", Village Voice; 06/29/99.

* * *
The only critics to take Rear Window seriously were the movie-mad writers of Cahiers du Cinema. "One can see Rear Window again and again, even when one knows the denouement," André Bazin observed.—J. Hoberman, "Out of sight", Village Voice; 01/25/00.

* * *
[Victor] Erice is illustrating the notion articulated in André Bazin's "Ontology of the Photographic Image" that the visual arts are an atavistic desire to arrest nature's flux.—J. Hoberman, "Natural selection", Village Voice; 05/09/00.

* * *
Seven Men From Now—Long unavailable and newly restored, Budd Boetticher's first Randolph Scott western initiated a cycle that marked the end of the traditional western. No one thought much about it back then except André Bazin who, in 1957, hailed the film as "exemplary," perhaps the best example of the genre he'd seen since World War II.—J. Hoberman, "Darkness Visible", The Village Voice; 09/26/00.

* * *
André Bazin termed this particular cinematic pleasure the "Nero complex," referring to the decadent Roman emperor who supposedly supplied his own musical soundtrack as his city burned. This rarefied aesthetic experience was democratized by motion pictures—which trafficked in disasters almost since the birth of the medium. As famously noted by Susan Sontag, movies—and now, of course, television and video games—offered the vicarious "fantasy of living through one's death and more, the death of cities, the destruction of humanity itself."—J. Hoberman, "All as it had been", Village Voice; 12/11/01.

* * *
"One of the original aspects of Soviet cinema is its daring in depicting contemporary historical personages, even living figures," André Bazin dryly observed in his 1950 essay, "The Myth of Stalin in the Soviet Cinema." It was one of the unique characteristics of Stalin-era Soviet movies that their infallible leader was regularly portrayed, by professional impersonators, as an all-wise demiurge in suitably grandiose historical dramas.—J. Hoberman, "Lights, camera, exploitation", The Village Voice; 08/27/03.
Posted by Michael Guillen at 7/07/2008 03:20:00 PM