DEAD CHANNELS—Whiter, Hotter & Even More Warped; But Still On Wednesdays! 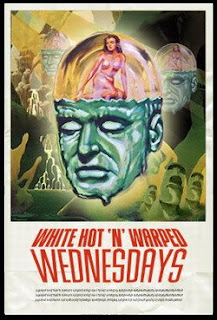 July 9, 2008—Byron Mabe's She Freak (aka Asylum of the Insane, 1967). Written by David Friedman. "Behind the tents and tinsel of a monster midway, something barbaric occurs on the Alley of Nightmares!" Claire Brennen is a waitress who leaves the greasy-spoon diner business for the excitement of the carnival, but quickly discovers that she actually despises freaks and human oddities. Uh-oh! Join us in a Shock-Box to witness Tod Browning's 1932 classic Freaks get dragged across the sawdust floor of a 42nd Street grindhouse.

July 16, 2008—Tommy Wiseau's The Room. "You're tearing me apart, Lisa!" Prepare to be flabbergasted. After a four-year run as a midnight movie in Los Angeles, this underground cult sensation is coming to a theatre near you—the Hypnodrome! We guarantee that this will be one of the strangest viewing experiences you will ever have! This amazing movie is so inherently wrong on so many levels that viewing it unleashes an undeniable subliminal power—it might actually be an astounding work of cinematic art!

July 23, 2008—J.X. Williams' Sex Crimes of the 21st Century (1973) & Lanny Baugniet's Bysshe (1968). Film scholar Noel Lawrence will present a detailed introduction to the film and to the colorful life and the European exile of the notorious, and almost forgotten, director J.X. Williams. Lawrence is spearheading the ongoing search for film prints of his lost work.

Followed by Bysshe, written and directed by Lanny Baugniet. "Baugniet should be shot and his body left to rot in the slime at the bottom of the sea."—Bob McCarthy, Cahiers du Cinéma. A decade and a half before both Ken Russell's Gothic and Ivan Passar's Haunted Summer, there was Bysshe. This is a heretofore lost 16mm film version of the now-famous tale by Theatre Rhinoceros founder Lanny Baugniet. How did 19 year-old Mary Shelley come to write her immortal cautionary tale Frankenstein or, The Modern Prometheus? With Sandra (Mrs. Peter "Dr. Who" Davison) Dickinson as Mary Shelley; Lanny Baugniet as Percy Bysshe Shelley; and Caroline (Mrs. Stuart "Re-Animator" Gordon) Purdy as Augusta Leigh.

July 30, 2008—J. Douglas Smith's The Period. Do you dare experience a surreal, bleeding-edge, satirical, indie menstrual comedy-horror from Kansas City? The choice is yours: run screaming from the theatre, or go with the flow.

The Period is a totally unique underground indie that follows the unique plight of Sharrie Heiman. She is forced to deal with her never-ending Amazonian menstruation, her furious girlfriend Clitoria, a perverted gynecologist, a fast talking agent, and the Art World! Warning! Contains extremely coarse language, bad rhymes, puns, crudity, nudity & oceans of blood from Ms. Heiman's fertile crescent. See it ... if you dare! 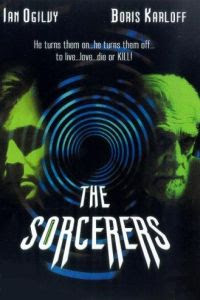 The great hypnotist Professor Montserrat (Boris Karloff) has developed a device to project his consciousness into the mind of another person to experience all of their sensory input. Jaded and bored with all the standard sex, drugs, and rock n' roll, Mike (Ian Ogilvy) is in the mood for something different. A match made in science fiction heaven!

"Director Michæl Reeves only managed to finish three movies (this is the second) before dying of an accidental overdose of barbiturates and alcohol in 1969 at the age of 24. Witchfinder General starring Vincent Price was Reeves' masterpiece and swan song, but The Sorcerers is nothing to sneeze at, either. Gritty and quite modern, this picture will not be confused with anything that came out of Hammer Studios during that era. Reeves was not prone to comic relief or the Shakespearian theatrics that mar other efforts of that decade. It's dark and immediate."—Film Threat.

A gun-slinging preacher returns to the debaucherous town of Playa Diablo to seek revenge on the notorious scorpion-venom drinking bandito, El Sobero. A confrontation of Biblical proportions will play out in the circle of death. This psychedelic indie-western is one of the most striking debuts in years. And we promised the director to play it loud.

As if all that isn't welcome news enough, The North American Fantastic Festival Alliance (NAFFA) is pleased to announce the addition of four fantastic film festival partners to its organization; New York Asian Film Festival, Toronto After Dark Film Festival, Danger After Dark in Philadelphia, and ScreamFest L.A. NAAFA was founded by Montreal's Fantasia, Alamo Drafthouse's Fantastic Fest in Austin and Dead Channels: the San Francisco Festival of Fantastic Film.

NAFFA is comprised of professional North American festivals dedicated to presenting the best new independent and international fantasy, science fiction, horror, animation, exploitation, experimental and cult movies, as well as selected retrospective programs, with a dedication to quality and respect for the filmmaker's work. The Alliance's mission is to assist neophyte filmmakers in navigating the chaotic, and overwhelming, film festival submission process by providing useful information and invaluable networking opportunities. NAFFA is recognized by the European Fantastic Film Festivals Federation.