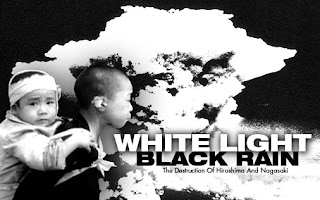 Today commemorates the 62nd anniversary of the WWII bombing of Hiroshima and mankind's first aggressive and strategic use of atomic power against other human beings. The humanity of those victims is the focus of Steven Okazaki's documentary White Light Black Rain. Steven Okazaki spoke with The Evening Class last week and I was looking forward to meeting him in person at the film's Pacific Film Archive ("PFA") screening; but, I was felled by a bad cold and couldn't attend. Fortunately, Frako Loden—who served as one of the translators on the film—was present and has graciously offered her dispatch from the evening's event. 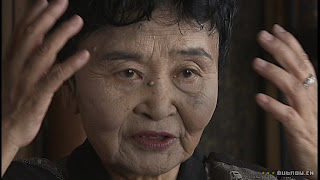 The screening of Steven Okazaki's White Light/Black Rain: The Destruction of Hiroshima and Nagasaki this past Friday, August 3, at Berkeley's Pacific Film Archive—the final screening before its airing on HBO this evening at 7:30PM PT—was sold out.

I'm glad I saw it on the big screen; it was so much more powerful than on DVD. The film highlights images drawn and painted by the survivors of what they saw in the immediate aftermath of the bombs. In fact, these are the images we see rather than photographs—so they are in color and much more emotional. Also included is the manga of survivor Nakazawa Keiji, Barefoot Gen. His father and siblings were crushed in their house when it collapsed. 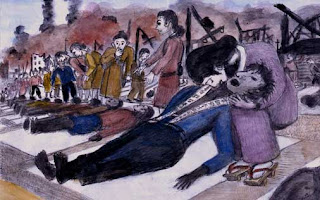 The color footage shot by the U.S. government (and not released, I believe, until 20 years after the fact) was much more lurid than the usual expected "historical" black and white. Okazaki says he was reluctant to use the color footage at first, thinking that the reds of the victims' burns would be too "grotesque." I thought color footage was a boon; B&W has a distancing tendency in documentaries, making it easier to dismiss footage from the past as something obsolete and irrelevant, while color footage feels immediate and more of our time. So it was hard to dismiss the connection between that horrible footage and the opening and closing footage of throngs of colorfully-dressed Tokyo pedestrians, eating crepes and pushing strollers. It made real the possibility that all these people—whom we don't normally associate with death but with kooky fashions and gadgets—could be vaporized, burned or hit with radiation as well.

The U.S. government's color footage also underscored the claim made by one of the survivors that it used them like guinea pigs. She says that jeeps came and rounded up her and other affected children. They were taken to a building and forced to strip naked. Those who exhibited symptoms like purple spots were examined closely and photographed. "We weren't treated, though," she pointedly reminds us. She remembers shouting at GIs (who had built a landing strip right next to their house, bulldozing the skeletons), "Why did you kill my family?" but—since they didn't understand Japanese—they just smiled at her. 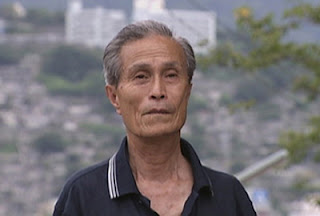 Most importantly, the color footage actually included two of Okazaki's informants: the kid whose entire face was burned and the postal employee who spent 21 months in the hospital recovering from burns to his back. (The latter survived the immediate aftermath of the blast by licking drizzle off a tree—he couldn't move.) It was extraordinary to hear these old men talk about their suffering while we could see their younger selves undergoing hellish treatment. One smiled for the camera as the other closed his eyes in extreme stoicism.

In his introduction, Okazaki traced the gestation of this film as a series of failed attempts. He implied that he was guilt-tripped into making it at first. Back in 1980 his mother suggested that—since he was unemployed at the time and his younger sister wasn't doing too well at S.F. State, he should help her in her classes. She needed to find an atomic bomb survivor she could interview for a paper. Okazaki proposed taking his sister to a monthly meeting of survivors at the Sumitomo Bank in Japantown. His sister said, "Oh, I didn't tell you—I dropped the class," and didn't need to go; but, he decided to go on his own. At the meeting he showed one of his ("not very good") films to the group, who voted unanimously that Okazaki must make a movie about bomb survivors. He said he felt he couldn't let down this group of people who looked like his mother, his aunts and uncles. 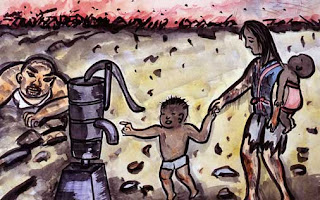 Okazaki endeavored to make the movie over 25 years. He wasn't satisfied with the short film he did make (Survivors). A Japanese TV network offered to let him make a film on the subject but balked when it became clear Okazaki was going to criticize the Japanese government. He was going to make the film in conjunction with the Smithsonian's exhibit on the Enola Gay in 1994, but of course that went down in flames due to pressure from U.S. veterans groups. After that Okazaki concluded, "So this is how history is written and which people get to write it." He was bitter about the whole experience. 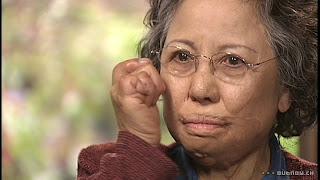 More recently he filmed Mushroom Club (which PFA programmer Steve Seid—bless his heart—kept calling Mushroom People). HBO's head of documentary development, Sheila Nevins, proposed he make a more comprehensive film about the physiological and psychological effects of the bombs. Okazaki says whenever he balked about showing horrible footage—worried that people would change the channel or walk out of the theater—Nevins would respond, "So what? Does that mean we should censor ourselves?" He gives her all the credit for having the guts to show everything.

The Q&A was long but hit all the right buttons. The film is being received well in Japanese theaters (where it's scheduled to play for 16 weeks), but Okazaki doesn't think it will ever get shown on Japanese TV. He says the response by Japanese TV people is muzukashii, which means "difficult" in the dictionary but always implies "Hell, no!" He invited the Japanese consul in New York and the ambassador in Washington, D.C. when he had screenings there, but both offices blew off his invitations. They chose to ignore him rather than acknowledge him or his film. (The film's criticism is that the survivors didn't get any help from the government until recently.)

This July Japan's defense minister Kyuma Fumio made the controversial argument—tiresomely common in the US but rare in Japan—that the atomic bomb was necessary to bring the war to an end. (I think he said specifically that it "couldn't be helped" and that it prevented the Soviet Union from occupying Hokkaido.) Okazaki happened to be in Japan at the time, so journalists asked him for comment. Okazaki said Kyuma should just watch his film. He doesn't think there was a direct connection; but, the defense minister did resign a few days afterwards. 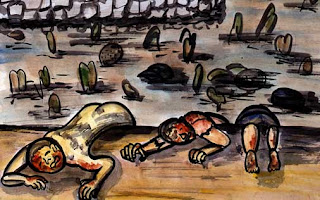 One questioner asked if he'd tried to contact the pilot of the Enola Gay, Paul Tibbets. (The film does feature four American servicemen relating their experiences in being test-detonators and pilots for the bombs.) Okazaki said no, for several reasons. One, Tibbets was 92, in poor health and hard of hearing. Two, he had told his story at least once a week at veterans' meetings and conventions and wasn't a fresh informant.

This whole issue of "freshness" is a consideration after 60 years, on both sides. One thing Okazaki didn't go into was the fact that there is a whole hibakusha (bomb survivor) industry in Japan. There is hibakusha art, hibakusha literature, hibakusha film, and hibakusha presentations. Some of the hibakusha have made a career of going all over the world talking about their experiences and advocating the end of nuclear weapons use. The Nagasaki survivors haven't been as prominent as the Hiroshima victims. Okazaki says that in his film, the Nagasaki survivors' less-told, "fresher" testimony is the highlight. 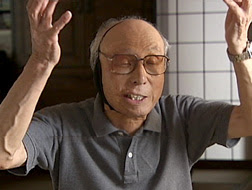 Another less-told aspect of the bomb survivors is that they've faced discrimination and ostracism ever since the weeks following the bombings, when mysterious symptoms showed up in people who had seemed fine but who died soon after. The theory developed that they were contagious. As a result, hibakusha have been blatantly rejected for jobs, housing and marriage prospects. This is still going on with descendants of the immediate survivors. The possibility for deformities and birth defects is still real. Over 160,000 people have died subsequent to the 200,000 who died at the time of the bombings.

I guess it was to be expected that nobody in the Berkeley audience tried to defend the bombing as a necessary evil to end the war or to save American lives. Instead there were questions about the benefits of making a film like this for cable ("I can't imagine PBS showing this," Okazaki said), the University of California's role in researching and producing nuclear weapons, and a call to a demonstration happening on Monday.

On my way out, I heard some viewers marveling over something one of the survivors said when she decided not to commit suicide like her sister: "There are two kinds of courage: the courage to die and the courage to live."