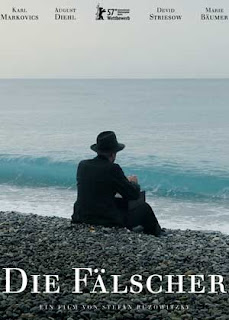 Just when I think I know all there is to know about the Nazi concentration camps, along comes a film with yet another slice of the historical pie. Though competently served, the question becomes who will have an appetite for this fare? Survivors guilt is more bitter than most palettes prefer. Not an easy film to watch; certainly difficult to digest.

The Counterfeiters, written and directed by Stefan Ruzowitzky, concerns “Operation Bernhard”—possibly the biggest counterfeit money scam of all time engineered by the Nazis in collaboration with select prisoners whose specialized skills afforded them a Mephistophelian choice: in exchange for a temporary reprieve from the gas chambers, and their willingness to create counterfeit currency to help the Third Reich finance its war effort, these select prisoners were offered life in a “golden cage”. Sequestered from their fellow inmates in two isolated barracks (Blocks 18 and 19) at the Sachsenhausen Concentration Camp, with enough to eat and comfortable beds to sleep in, the participants of Operation Bernhard face the ultimate question: Is it possible to save your life and, at the same time, save your conscience? Especially when the pained cries of the tortured can be heard through the walls? Or when news arrives that loved family members have been exterminated at other camps? 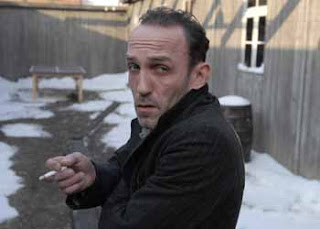 The “King of the Counterfeiters” Saloman Sorowitsch (Karl Markovics) looks the other way when he cannot face the truths in front of him. August Diehl as Adolf Burger excels as the one who cannot look away and begins to covertly sabotage the enterprise. Sebastian Urzendowsky (last seen in Matthias Luthdart’s Pingpong, which screened earlir this year at San Francisco’s Berlin and Beyond) renders a heartfelt portrait of an inmate weakened by tuberculosis who Sorowitsch struggles to protect; his last connection to what is human within him. Director Ruzowitzky does an admirable job of evoking empathy for these individuals placed in such an ethically-fraught predicament.