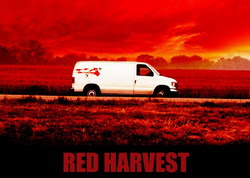 The crop is excellent, it's been properly packaged to travel—so it's time to deliver the bud and get paid $40,000. But be careful not to run over any children on the way.

Dylan Griffith's 22-minute short Red Harvest screened as part of Dead Channels' "Short and Really Scary" program. What drew me to the project was awareness that it was penned by Twitch teammate Collin Armstrong. I welcomed the opportunity to meet Collin—who accompanied the film to San Francisco, along with director Dylan Griffith, and actress Samantha Simon—and to sample some of his screenwriting. I'm happy to report that Red Harvest is effectively creepy and I hope the short is transformed into its originally-intended full-length feature to take advantage of Collin's intriguing backstory of a rural landscape saturated with buried blood. How appropriate that Red Harvest is produced by Venogram, with its allusions to veins. In its abbreviated form, however, Red Harvest succeeds precisely for what it does not disclose. With a touch of Edgar Allan Poe's "A Telltale Heart" (can you ever really bury a family secret?), a touch of H.P. Lovecraft's "A Shuttered Room" (what is running around upstairs in the attic?), and just enough homage to J-horror to startle one's wits, the revenge of the dead over the living has never seemed so foreboding.

Over beers and Mayan appetizers at Mi Lindo Yucatan, I talked with the creative team of Red Harvest.

* * *
Michael Guillén: Collin, you wrote the screenplay for Red Harvest. How much time passed between your penning the story and it's transformation into a short feature?

Guillén: Did your story translate into film as you imagined it?

Armstrong: I'd have to say I'm really proud of the job Dylan did, especially considering what we had envisioned and what we ended up actually being able to do from our own pockets. It ended up having the tone that I wanted. I wanted it to feel classic. I didn't want it to be overloaded with gore or visual bombast.

Guillén: Red Harvest is technically well-structured. Its jump-cut editing and sound design pull you right into the atmosphere of the film. That's not something that can be written into a script. How did you guys develop that?

Armstrong: Dylan and I worked together a lot on the script. I wrote a couple of drafts. The first draft was set entirely inside the van. They never left the van. We realized that the rule to save the rule really didn't make sense and it was easier to move it outside. We were finding all these ways to cheat that idea. We decided to push it beyond the van. But he and I worked pretty closely. We worked on a lot of the scenes together, discussing how they should flow, what it should look like and feel like. We have different tastes but we know what each other likes. We've been friends about 10 years and we're always sharing different creative endeavors that we enjoy with one another. We have a good bond in that way.

Dylan Griffith: Everybody that's involved in the movie, we try to bring in [to the creative process]. We try to be selective about our creative collaborators. We collaborate on everything together. Almost all the creative aspects of the movie, we were all involved in one way or another. Collin and I—when he's writing a script and I'm looking at it trying to decide how I want to approach the material—we play a lot of "what if?" games and scenarios. We try to find the characters and put them through this [or that] scenario. The characters and the back story to the short and feature are moreorless the same; but, then the stories are different. It's a different story with the same elements.

Armstrong: In terms of the technical elements that really stand out in the film, there's a lot that I showed and talked to [Dylan] about and vice versa, and a lot of that informed how the movie ended up, working on those levels, beyond the story [to] how we're actually telling it.

Griffith: We do a lot of sharing of other elements. We have everything from movies to books to comic books that we try to share with each other and discuss how we think that sort of storytelling or character development might work in our story.

Guillén: There are nice touches in Red Harvest that are recognizable as influences yet don't call too much attention to themselves. A touch of Lovecraft. Some J-horror. Other influences?

Armstrong: I really enjoyed '70s American cinema, specifically the types of horror movies that give you more atmosphere and character than gross-out segments; [films] that built tension. An example: that old TV movie A Cold Night's Death, which I wrote up for Twitch. It's one of my favorite films of all time. I thought about that a lot when I was writing characters in a confined space and out of their natural element.

In terms of sound, we looked at another made-for-TV project—I can't think of the name of it but it was based on a M.R. James story—but it took natural sounds to bizarre proportions. Like taking the noise in the fields [in Red Harvest] to a level where you recognize what it is but it doesn't sound quite natural; there's something off about it.

Guillén: That works. Like that moment in Val Lewton's Curse of the Cat People where the shriek of the bus always makes me jump out of my skin. To this day that remains one of my top 10 cinematic scares. That amplified sound goes right into your body. That's what I admired about the sound design in Red Harvest; it went right into my body and—in the scenes in the cornfield—it effectively circled my body. Very visceral.

Samantha Simon: It was so much fun. I grew to really like her. One of the things that attracted me to the project was what Collin was saying about how it was more character-driven. It wasn't all cheap scares. It was really about the relationships [between the characters]. The fact that I had a feature-length script to look at before it was cut down to a short helped me and the other actors to be able to develop a full character and full relationships. It made it easier for us to work together.

Armstrong: If it wasn't so painful, I'd say we should write feature scripts for all our shorts. But the disappointment of what happened was too much.

Griffith: Yeah, we spent a year auditioning and rehearsing for this feature.

Armstrong: [Addressing Samantha] How long were you cast before they actually shot the movie?

Simon: I was cast a year before we shot the film.

Griffith: So we kept [the actors] on hold and they were all so excited about doing the film but at some point we realized we weren't going to get enough money to do a feature. I called them all up and told them we still wanted to pursue this project, but that we would get back to them. I'm sure they were all like, "Sure. Whatever." We finally called them back at the end of the next summer and said, "We're shooting a short. It's going to be a totally different script but we're going to use the same characters." They all came. Blaine, by that time, had moved on and moved out West. We didn't do any rehearsing for Red Harvest at all. We just showed them the script and said, "It's totally the same characters and back story but a totally new plot." And they just jumped right in and did it. They had really internalized and understood the characters at that point by learning them for the feature. It was just a different take on the same idea.

Guillén: So Red Harvest has shown at a film festival in Indianapolis and now at Dead Channels; where to next?

Griffith: We're waiting to hear back.

Armstrong: Yeah, we're waiting to hear back from about 15 or 16 other festivals.

Griffith: This is our first time on the festival circuit. This is our third movie but our first as a company so this has been a big learning experience for all of us. We're seeing what plays and what doesn't play very well at these things and, hopefully, our's isn't usually the latter. So far, so good.

Guillén: Your short is a solid piece of filmmaking and I hope you can turn it into a full-length feature. If you do, will you keep the same sound design?

Griffith: We'd like to. Our sound designer came on later after we [shot] it, but he now has a real passion to follow the movie through and shoot it from the beginning. He wasn't there for field audio and the guy we had originally dropped out.

Armstrong: 85% of the movie was ADR. Our on-set audio just didn't work.

Griffith: I'm proud to say that the people we worked with and brought along on this project and others have always wanted to work again on something else without my asking or looking for someone else.

Griffith: Of our very few write-ups, one of them was in Indianapolis and it was a series of backhanded compliments. "Nice movie, stupid." [Laughter.]

Guillén: Does the film's rural setting stem from your living in Indiana?

Armstrong: Yeah. Wherever you live, if you're there long enough—and I've lived on and off in Indianapolis for 20+ odd years—there are things about [Indiana] that if you think about it long enough, seem strange or possess those qualities. I wanted to play with some of that. These endless fields when you're driving from point to point in the state, [I was] just thinking what would happen if you had to pull over and you did end up at someone's house and something seemed off? It comes from having spent a lot of time there and maybe, actually, I don't know, wanting there to be an aspect to it that's maybe a little bit more off than it is. Because it's also more ordinary most of the time and—within that ordinariness—when something's so normal, there's something strange about it.