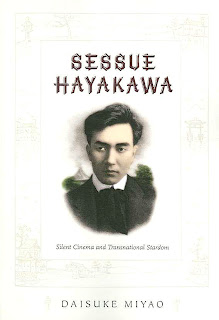 New York fans of silent film will have the opportunity to assess for themselves just how photogenic Sessue Hayakawa is when the series "Sessue Hayakawa: East and West, When the Twain Met," opens at the Museum of Modern Art September 5–16. I mention it in passing here because, according to my friend Frako Loden, discussions are already underway to bring the program to the Pacific Film Archives.

Miyao writes at the KineJapan mailing list: "This is the first extensive retrospective of Sessue Hayakawa (1886-1973), Japanese actor and very popular movie star in the period of silent cinema. Most of the surviving prints of his silent films in the American film archives, including Hayakawa's debut film O Mimi San (1914), Thomas H. Ince's The Wrath of the Gods (1914)—a spectacular film with scenes of a volcano eruption—and Cecil B. DeMille's controversial race melodrama The Cheat (1915), will be screened in the series. This is a rare opportunity to witness Hayakawa's acting with "great intelligence and subtlety." The Devils' Claim (1920)—the film produced at Hayakawa's own production company, which has recently become available and has not been seen even by Hayakawa specialists—is also included in the series."

Donald Richie reviews Sessue Hayakawa: Silent Cinema and Transnational Stardom for The Japan Times, as does David Cozy for Google Groups, and Film Stew.
Posted by Michael Guillen at 8/23/2007 12:53:00 PM