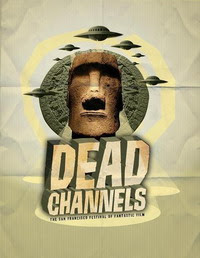 When my Evening Class cohort Michael Hawley joined me at the Palm Springs International earlier this year, Takashi Miike's Big Bang Love, Juvenile A was high on his wish list; but, it was a no-show. It slipped over to his wish list for the Asian-American—again, a no-show—and then to the San Francisco International—where three strikes usually means you're out. Leave it to Bruce Fletcher to reconfigure the ol' ball game and bring Miike's 65th ("or so") film to Bay Area audiences as the opening night punch for Dead Channels Festival of Fantastic Film (Thursday, August 9, 7:30PM). We owe him a big thank you. Especially because he's bringing this visual mindfuck to the Castro Theatre's big screen.

Call it a passing phase, or maybe even a mood, but lately scratching my head feels good in response to movies I don't completely understand yet appreciate seeing. Nuit Noire started it with its textured self-referentiality and now Takashi Miike's Big Bang Love, Juvenile A follows suit with its compelling visual artistry pinned up to the big screen by a few plot points. Plot, however, is not actually the point. To better describe this somewhat impenetrable film, pardon my relying on the articulations of others.

If a synopsis is required, Shochiku's is mercifully brief: "Jun, an employee in a gay bar, kills a customer who sexually assaults him. While being transported to jail, he meets Shiro, another young prisoner who displays his brute force from the beginning. The timid Jun is attracted to his intensity—until one of them dies, and the mystery surrounding them deepens. Inside the prison the dance continues, and outside the walls, a rocketship waits in the shadow of the ancient pyramid." "Has Miike gone all Von Trier on us?" Todd Brown asked at Twitch when the first stills began coming in for Big Bang Love Juvenile A, referencing the sparse, nonrealistic sets. The Gommorahizer reported on the film's selection at the 56th Berlinale (where it was nominated for a Teddy Award) and offered up the Berlinale's capsule.

Von Trier isn't the only auteur being referenced. Midnight Eye's Tom Mes melds the references seamlessly: "Big Bang Love, Juvenile A continues where Izo left off, with an overtly homoerotic, Brechtian prison drama whose barely-lit concrete corridors echo whispers of Von Trier and Godard." That's right, you've got your conceptual prologues and your minimalist sets abstracted into tense design plus some modern dance thrown in to purposefully fuse virilified masculinity with some fluttering red chiffon. Gender fluidity in an all-male prison naturally summons up hints of Jean Genet but not so much for heavy man-on-man action as for the glowing epiphanies that aestheticize murder. Daniel Kasman, in fact, writes that Big Bang Love, Juvenile A "evokes Jean Genet's Un chant d'amour (1950) by way of Lars von Trier's Dogville (2003)." 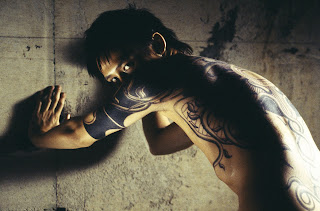 Hypnotically artificial, Big Bang Love, Juvenile A "feels like a brooding existential mystery," Chiranjit Goswami writes at Not Coming to a Theater Near You, "frequently kinetic but also periodically pensive, where young men grapple with questions concerning identity and connection." They grapple in "scenes involving the attainment and exhibition of masculinity", which—in gist—Goswami insinuates reflects the "complicated concerns regarding man's ability to transform himself." Hey, no one said becoming a man would be easy (let alone comprehensible). But more than a "mystery", Goswami is more on track when he recognizes the cinematic exercise Miike poses with his Nouvelle Vague flourishes of "elliptical editing, jump-cuts, bold color schemes, or the hand-held cameras applied to convey the chaotic and intimidating atmosphere inside the enclosed prison cell." Which is to say, we're being shown something rather than told; something about creative resistance to imprisonment.

So—as I said at the very beginning—this is an admittedly confusing movie that is visually arresting and you too might find yourself scratching your head, and enjoying it. But don't go if your third acts require resolution or some kind of clear answer or meaning to it all and don't go if you're expecting someone's foot to be sawed off. Miike's playing with something else here; something he wants to show you. Then again, what he shows you, he might take away within the scene or while shifting into the next scene. Monitor Shiro's tattoos and let me know what you think that disappearing act is all about.

Be sure to check out Dennis Harvey's SF360 interview with Bruce Fletcher for his keen insights into the festival line-up.

08/08/07 UPDATE: Per Dave Hudson at The Greencine Daily: The San Francisco Bay Guardian's got more coverage of the fest opening tomorrow and running through August 16. Johnny Ray Huston writes up John Newland's 1973 Don't Be Afraid of the Dark and Jamaa Fanaka's 1975 Welcome Home Brother Charles; a few of the newer titles singled out by Cheryl Eddy: Maurice Devereaux's End of the Line, Simon Rumley's The Living and the Dead, Jeff Roenning's Hot Baby! and Annette Ashlie Slomka's The Secret Life of Sarah Sheldon.
Posted by Michael Guillen at 8/07/2007 09:37:00 PM