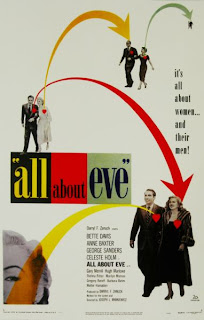 Recently, in conversation with Robert Osborne, we touched upon his friendship with Bette Davis. Originally, Osborne had befriended Olivia de Havilland who was a good friend of Bette's and de Havilland had expressed her concern at that time over Bette's fragile health. She suggested—should Osborne ever be in Bette Davis's company—that he be attentive to her frailty. The opportunity arose at a social function where Davis took note of Osborne's friendship with de Havilland, grew weary of the social function, and asked Osborne to escort her up to her room, inviting him in for a drink. It was in the middle of the afternoon but Osborne didn't dare refuse.

In her suite Davis chugged down scotch on the rocks and Osborne tried to keep pace, let alone make conversation; but, the whole time, Bette Davis wouldn't even look at him. She didn't express any interest in what he was saying. Whatever topic he tried to introduce, she ignored. There was a recently-published art book on Walt Disney on the coffee table but she dismissed any discussion of it. He then brought up Star Wars, which had recently opened in the movie theaters. He asked her if she had seen it. "I don't like that kind of movie," she retorted, belting down her scotch. But it's a really amazing film, Osborne countered, it's really special and unique. In a louder, angrier voice she snapped, "I told you, I don't like that kind of movie." Osborne, by then, stressed out by not being able to initiate conversation and feeling suddenly dizzy from their afternoon drinks lost his composure and said, "Well that's the stupidest thing I've ever heard." Bette Davis whirled around, made fierce eye contact, and then smiled. They became good friends until her death. She welcomed a challenge, Osborne explained.

"I have a little codicil here. When the movie was over and finished, in the finale scene there were several replicas of the Sarah Siddons Award. Baxter wins one and leaves; Hugh Marlowe wins one and leaves; but, they had several on a table. So Mankiewicz at the end of the film gave Anne Baxter one to keep, gave Celeste Holm one to keep, gave Bette Davis one to keep. In the course of their careers, Bette Davis, Anne Baxter and Celeste Holm all won a real Sarah Siddons Award for stage work they did in Chicago. And, when Bette Davis died, I got her Sarah Siddons Award, the one she was given by Mankiewicz from All About Eve. I keep it in a display case at my home in New York."

* * *
I'm not even sure how many times I have watched All About Eve. My lips move involuntarily at all the best lines; specifically, of course, the "fasten your seatbelts" retort that—even at the Fabulous Fashion in Film Festival screening—caused the audience to cheer in delight. Audiences love that line, precisely I propose because it is the exact opposite of the wit of the staircase. This is no lingering afterthought of what might have been said. This is delivered at the perfect moment, no holds barred, and with impeccable timing. 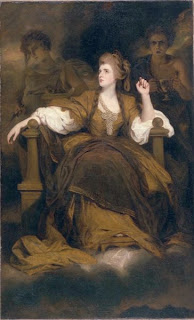 I like to imagine, considering Osborne's story about befriending Bette Davis, that the scotch she was drinking was a fine highland malt—Lagavulin or Laphroig or, if need be, Oban—because, I want to think of Bette Davis and All About Eve as one of those complex scotches, flavored by age. Certainly, All About Eve becomes fascinatingly complex the more I savor it. Each time I watch this film, I catch some new detail. Perhaps because of my conversation with Osborne and his description of the Sarah Siddons Award, this is the first time I noticed the close-up of Sir Joshua Reynolds' portrait of Sarah Siddons as the Tragic Muse hanging at the top of Margo Channing's staircase; its relevance rendered poignant by proximity at that particular juncture in the script.

Joseph L. Mankiewicz's script for All About Eve is available at the Internet Movie Script Database. Watching the film yesterday evening at the Castro Theatre, the film's scriptural contrivances seemed a bit precious and self-conscious; the talk sounded artificial and somewhat staged; but, that didn't distract me from enjoying the film even one iota. If anything, I understood this is how people want to talk. These are the lines any self-respecting actor dreams of delivering. 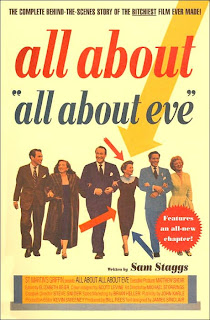 There's so much that has been written about All About Eve, not the least of which is Sam Staggs' masterful All About All About Eve (St. Martin's Press, 2000). His detailed tribute to the making of the film underscores not only his scholarship but his sheer enthusiasm; film writing at its very best, riddled through and through with the kind of gossip that adds patina and sheen. Adding to the thread, Staggs writes: "Sarah Siddons encloses All About Eve like dramatic parentheses." Staggs compliments Siddon's notorious shrewdness. "A great actress, yes, but also a celebrity in the modern sense, for she used her fame as a tool to manipulate her image. She promoted herself two centuries before the advent of press agents." Her renown as Lady Macbeth is paid deference in Mankiewicz's script during the infamous party sequence. (Ibid., pp. 165-166.)

Despite Siddons' success and the mania she induced among her fans, Staggs emphasizes that Siddons' fame was never cheap. "[I]n Dublin they pelted her with apples and potatoes. More than once she was fired, thus becoming an early example of box office poison." (Ibid., p. 166.) These concerns—one might say the concerns of an aging actress—inform All About Eve.

Staggs explains that Chicago's Sarah Siddons Award—created no less than two years after All About Eve—acquired swift cachet and "became the most prestigious in the American theatre, after the Tony"; despite the fact that Mankiewicz had intended his mock award to "poke fun at the Oscars, the Tonys, and all manner of plaques, globes, medals, and certificates in the entertainment industry." Staggs details that Celeste Holm won a Siddons in 1968 for Mame; Lauren Bacall in 1972 for Applause (the musical adapatation of All About Eve); and Bette Davis in 1973 in special recognition for All About Eve on the 20th anniversary of the society's founding. Anne Baxter presented the award to Bette Davis. (Ibid., p. 167.)

Staggs culls out one final bit of Siddons trivia: "In 1957, while living in Laguna Beach, Bette took part in the town's annual Festival of Arts, one feature of which is the Pageant of the Masters—a series of tableaux vivants with townspeople posing in recreations of great works of art. Bette looks every inch the Queen of Theatre in her representation of Sarah Siddons as the Tragic Muse." (Ibid., p. 168.)
Posted by Michael Guillen at 8/02/2007 11:59:00 AM