Evening Class contributing writer Michael Hawley alerted me to the short films of Bay Area film-maker Steve Pandola, specifically Steve's most recent short Lunch at the Lake featuring Nathan Laver, an enterprising piece of digital camera pixelation that caught my attention and took me to the Pandola Brothers' website Stain and Cake to view more minutes of entertainment.

In conjunction with the Red Vic midnight screenings of the Stain and Cake oeuvre coming up this Friday, October 27, 2006, I spoke with Steve about his short films.

* * *
Michael Guillén: Steve, I was intrigued by your independent methods of exhibition. That you're planning to have this Red Vic screening of your short films. It appears you have created an ensemble film-making team made up of family and friends under the aegis of Stain and Cake. What does Stain and Cake refer to?

Steve Pandola: It's not dirty, which is what some people immediately think. Basically, it's an inside way of saying Pandola Brothers Films. It means basically Tony, Steve and Brian in a very obscure way that means nothing to anyone but the three of us. That's essentially what it means.

MG: How did you three get going? You're obviously using a digital camera. Have you always wanted to make films and just decided to do it?

Pandola: Basically the three of us have always been interested in making films. We were making films in third-fourth grade with our dad's big huge VHS camera way back when and then I went through college and actually got a film degree at UC Santa Barbara. From that point on I got distracted by a "real" job after college and then just remembered what my passion was and decided to move to San Francisco where my family's based and make films, regardless of anything else, just continue to make movies.

MG: I'm glad to see that, hear that, because you have a wry, self-deprecating sense of humor that proves attractive in your films. The first one I saw—as I mentioned—was Lunch at the Lake. How did you effect that?

Pandola: I was up in Tahoe with a friend of mine who is also a film-maker. He does work out of Boston with a sketch comedy group Hooray For Funn! ["the extra n is for extra fun"]. The two of us were up there and we make a movie every summer in Tahoe and this time there were only two of us there. I was trying to think of something that we could do with only two people. I remembered shooting a pixelation in college, which is essentially taking a still frame for every frame of film, so 24 frames per second. In college we had used a 16 mm camera where we plunged one frame at a time. Once I got out of school and didn't have access to a film camera, I wasn't sure how you would do that with video. I didn't really get how that would work with interlaced fields and all that. I realized that with digital cameras these days and their gigantic memory cards, you can get quite a few photos on a memory card and did some quick math the first night up at Tahoe and realized we could shoot a 3-minute film with my still camera. I also brought an aquarium in case we wanted to shoot anything underwater. I tried to think of what would be a cool idea for a pixelation that somehow incorporated being underwater because I figured there had probably never been an underwater pixelation before. We shot that with a still camera; about 1,500 images.

MG: It was truly remarkable and clever and the piece of yours I most enjoyed. Is your style for scripting improvisational or do you have the film fully scripted before you start shooting?

Pandola: It varies. Most things are scripted to an extent. For example, Ahead Of the Game and Hide Your 'Stache, we had a pretty good idea of what we wanted to do. I feel when you're working with non-actors, it's best to not give them a direct line. It's best to give them a question that leads them to the answer you're looking for; but, we talk about what the answer is, but not word for word. We have a script. We have an idea of a beginning, middle and end, but as far as where that might take us and how long the interviews might go on, that's indefinite and almost like a documentary. The shooting ratio is very high. We shot almost three hours of footage for Hide Your 'Stache, most of that being very long interviews, which give you these genuine moments where someone has finally gotten comfortable in their character 10 minutes into the interview and answered this question in a funny and honest way. Today's the Day was obviously scripted beginning to end. It's very straightforward. Lunch At the Lake, as it went along, we came up with the idea. Originally, he was going to go into the water, grab a fish, go back up. Then when we started looking for the prop for the fish, I found the oven mitt and thought, "What a perfect ending if he actually uses it as an oven mitt." That was sort of an improv.

MG: I enjoy the banter in your films. Obviously that must come from bantering around with your brothers as you were growing up. It's a good feel. Often, with independent amateur films using non-actors, you don't often get the timing as good as that and you guys have got the timing down really well. Are your hopes to do future comedy or live skit work or film skit work? Do you know the group Uphill Both Ways?

Pandola: I don't. Uphill Both Ways, they're a sketch group?

MG: Yeah, they're a sketch group that incorporates short films into their comedy. I was thinking you could easily do something like that.

Pandola: That sounds interesting. I came to San Francisco with the intent of doing a pilot for a t.v. show with my brother. We were both inspired by The Office, the British version, and loved the idea of six episodes that are great. Not this idea of doing 22 episodes that some are good, some are kind of hit and miss. We liked that idea of two people working solely on a project and doing a six-episode season that—stand alone, the episodes would be great; but, there's also a story, there's an arc that's going along for all six episodes. That was our goal: to write six episodes, shoot one episode, and see what we could do with it. It was a little bit too much to bite off with both of us having jobs and the other things you have to do in life. The short films became an outlet for me in the meantime but that's something I'd like to revisit. That's something I'd like to eventually do.

Pandola: The character was an amalgamation of so many people we know. Both of my brothers and I find this somewhat humorous in our generation, this idea of these extremely grandiose dreams with no intent on hard work and plan. It's just: "I'm going to be something. I'm going to be great. Wait until the world gets a load of me." Without any sort of plan. It's also ironic, we're the generation that's been told from day one you can do anything, you're capable of anything, you can be a rock star if you want to be one, you can be a film-maker if you want to be one. A lot of our generation took that to heart and are waiting for it to happen without taking any initiative. That's what that was about. Part of the interview that didn't make it into the film, he talks about being a rock star and he's got a band with some friends and thinks that's going to work out. That's what we're sending out, that this whole generation [thinks] things just sort of happen without having to do anything. You can live with your parents, mooch off them, and someday you'll be famous.

MG: It's wanting to be in demand without meeting the demand in any way. Hide Your 'Stache, what I found most hilarious was the pan to the moustachioed animal head. I liked that.

Pandola: Again, I love getting into the situation because all these things build. That was not in the script. That was not like—oh, we're going to have a pan to the animal head with a moustache on it—it was: I walked into the room, one of the people had brought some fake moustaches, we put one on there and thought, "That would be really funny to have a pan to that while everyone's having this conversation about moustaches." Being able to get creative and have these ideas of what would they do? What would the room be like? What sort of snacks would they be eating? Of course, they'd be eating Pringles and playing Monopoly. That's fun and that comes out of being in the environment. Not all of that was scripted. 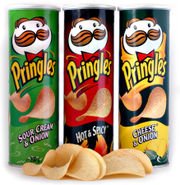 MG: Today's the Day struck me as mildly nihilistic and a subtle spin on the contest between individual will and predestination. What were you going for there?

Pandola: It's a similar theme to Ahead Of the Game. This idea of people constantly saying that we're going to do something. It came from myself. I can't tell you how many times I've gone through many of those pieces of the day. I'm not going to hit snooze, I'm going to get up today. And you don't. And you're late for work. Again. As always. Today is the day I'm really going to start working out in the morning, do my push-ups or do my sit-ups. I think that's human nature and I think it's very relateable. The message at the end is obviously—maybe a little too obvious—you never know what might really happen and you might as well take control of the things you can because you're only here for so long, we're only here once, and obviously no one says today's the day I'm going to die. That doesn't come up. No one thinks of that and yet that will eventually happen one day. So, yes, I could see that as a nihilistic take on life but it was more meant to be motivational.

MG: I'm impressed with the independent way you're exhibiting your work. You offer them on YouTube, offer them on your website, and have now decided to rent the Red Vic to project the films on a large screen. What inspired that? What are you hoping to achieve?

Pandola: The inspiration for that was really to let the people involved in the films and anyone who's become a fan of them online to see the films the way films are meant to be seen. If you like the films, the only option right now is to watch a tiny box on your computer screen. There's nothing like seeing a film on a big screen, as I'm sure you know. Even doing the run-through at the Red Vic, I was just tickled to see the films on a big screen like that. It's really for anyone who has been involved and anyone who like the films. It's the right way to see a movie and, hopefully, people will be able to take advantage of that opportunity if they want to.

MG: I agree 100% and I admire your insightful bridging between the two exhibition modes.